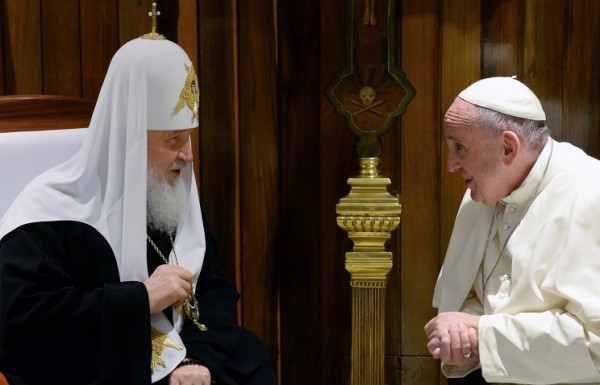 “The idea of organizing such meetings was supported in our society – 66% of respondents consider it necessary. The share is significantly higher (71%) among Orthodox Christians than among followers of other religions (54%). Elderly people agree with this more (82%) than the younger generation(55%),” WCIOM said in a report published on its official website on Wednesday.

Sixty-two percent of respondents think that it is necessary for Russian Orthodox Church and Roman Catholic Church to further develop their relations, at the same time preserving the autonomy of each church. Ten percent of those polled support the idea of unifying in one church, eight percent are against any cooperation between the churches. Two percent of respondents refused to respond while 18% of people found it difficult to formulate their opinion on the issue.

The poll was conducted by WCIOM on February 20-21 among 1,600 people in 130 settlements in 46 Russian regions. Statistical error does not exceed 3.5%

Pope Francis and Patriarch Kirill met at Havana’s international airport on February 12 to sign a joint declaration and call upon the world community to present a joint front for protecting Christians in the Middle East and other regions. It was the first-ever meeting between the primates of the Roman Catholic and Russian Orthodox Churches after the schism of 1054 when the formerly united Christian Church broke in two.