On January 7, 2014, the station Rossiia televised an interview with His Holiness, Patriarch Kirill of Moscow and All Russia, in which he spoke with the journalist Dmitri Kiselev. Continued from part one. 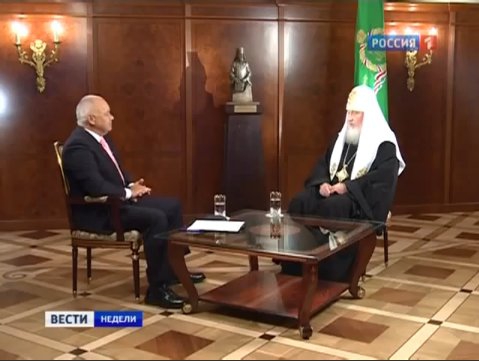 Question: When you say “here,” you of course are not referring only to Russia, since our common Orthodox world is bigger than a single country, even the largest in the world. You are speaking about the challenges and threats to the Church and Orthodoxy, and to Christianity in general. The Church, nonetheless, remains a very important societal institution and, it goes without saying, a moral authority. Perhaps therefore the temptation arises to use it for one’s own short-term political purposes, as we now see is the case in Ukraine. Ukraine is experiencing hard times. With what words would you like to address your flock in Ukraine?

Patriarch Kirill: That which is going on in Ukraine hurts my heart very much. For me, Ukraine is my own country, my own nation, my people, and my flock. That which I am now doing is bound up with my inner spiritual life. I pray for Ukraine, I pray for this nation.

I understand that there is the threat of a divided nation. There are threats of another round of civil confrontation. In general, what we now see is a revolutionary situation. As a country that has undergone a revolution, we should have some kind of inoculation against this method of solving political problems. For experience shows that during revolutionary times passions are loosed and people begin to speak a language and to use a methodology with which you can never solve any problem.

Revolution is the loosening of passions, the use of people’s inner energies to solve specific tasks. But normally the main objective of a revolution is the change of elites.

Question: In fact, a struggle for power. 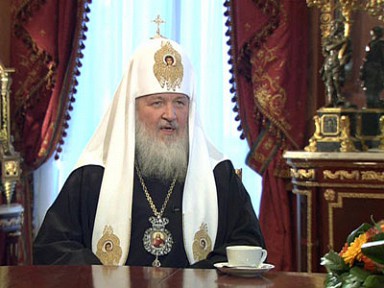 Patriarch Kirill: Yes, that is what has always happened.

There is another dangerous side of revolutions: when the ideas that are articulated and proclaimed are not programmatic. Take the famous slogan: “Equality, Fraternity, Liberty.” Could anyone have opposed this slogan in France in revolutionary Paris? No one. What a remarkable slogan! It hangs to this day on the front of every French city hall: “Égalité, Fraternité, Liberté.” Right? “Equality, Fraternity, Liberty.” But we know that this slogan was never incarnate in life, including in the French Republic.

What happened? After this flare of revolutionary sentiment came Jacobin terrorism, and then the dictatorship of Bonaparte.

In Russia there was the same slogan, the same energies, the same sacrifices on the barricades, and the same wreck of human lives. Therefore the Church’s main message is to call people to peace and calm, which is what our Ukrainian Orthodox Church did. There can be no other language. The Church cannot use political programs.

When priests appear at the barricades and incite the people, this is not the Church’s message. Of course, the message of reconciliation can be annoying to agitated people: “What are they saying? It’s always the same thing.” But this is the same saving word of God: “Peace I leave with you, My peace I give unto you.” “If you can, keep peace amongst yourselves,” says the Apostle Paul. This means that the Church cannot have another message.

Today I also make this appeal, if anyone is listening to me in Ukraine, that people need to collect themselves, to focus. This does not mean that I am calling upon people to reconsider their political viewpoints. After all, the Church has never associated itself with any particular geopolitical project. If it were so, then the Church would not exist. The Church bears the word of reconciliation, it appeals to the human soul, it should help people in these difficult times to collect themselves and focus. And, perhaps, to lay the groundwork for dialogue that could help resolve the problems that today stand before Ukraine.