Nativity of John the Baptist

‘What is the purpose of life?’ John the Baptist who never married, who remained a virgin, who prophesied, tells us that the purpose of life is to be spiritually fruitful. This is his prophetic revelation to us. Whether we are called to marriage and having children or not, we are called to bring forth spiritual fruit, to improve the world and not to worsen it, to be fruitful, and not to be barren, as his parents had been.
Archpriest Andrew Phillips | 06 July 2010

Throughout the ages at various times in their lives people in every generation have asked the questions: ‘What is the purpose of life? What is the point of life?’

Ancient, primitive people, obeying animal instincts, decided that the purpose of life is to mutiply, to reproduce, to have as many offspring as possible, simply in order to ensure the survival of the race. 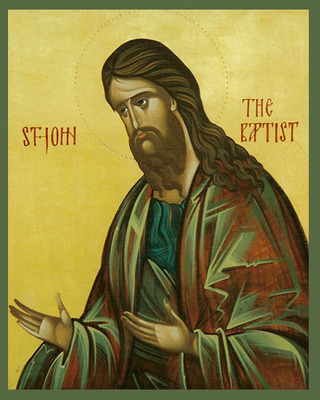 We can see this near the beginning of the Old Testament when Abraham was told ‘to go forth and multiply’. Gradually, however, as revelation came upon revelation to the chosen people of God in the Old Testament, this command was refined. It was revealed that people were to multiply for a reason other than survival. Barrenness was a stigma, not only because through it men and women failed to ensure survival, but also because it was revealed that somewhere one woman was called to give birth to the Messiah. The Messiah meant the Saviour. Thus children were born to various devout and often aged couples, to Adam and Eve, to Abraham and Sarah, to Jacob and Rachel. Thus sons like Abel and Joseph or Joshua and Samuel and many others all in some sense prefigured the Messiah.

Of course it is true that even the intuition that a Saviour was to be born of a woman was usually distorted and the Jews imagined that the Saviour would appear as some sort of political and nationalistic hero, a freedom-fighter or terrorist, depending on one’s viewpoint. Nonetheless there were those in the Old Testament whose vision and understanding were so pure that they knew that the mother of the Messiah would be no ordinary woman. Thus as a high point of this process of revelation in Chapter 7 of his book, Isaiah the Prophet wrote that ‘a virgin would give birth’.

At the very end of the Old Testament there appeared a particularly devout but childless couple, Zacharias and Elizabeth. It is their story that we have heard in today’s Gospel. Elizabeth, said to be some eighty years old, was barren. This was a particular stigma for her husband was a devout priest who was to set an example by child-bearing with his wife. And then the miracle happened and Elizabeth conceived, We should not that she conceived in the normal way, unlike the Holy Virgin Mary. However, the intention of the parents was particularly godly.

Their son, the Baptist John, thus came to be called ‘the Forerunner of Christ’, a star compared to Christ, the Sun of Righteousness. Our Lord Himself called him the greatest born of women. Thus in the Church he has become the particular patron of monks and is called an earthly angel and a heavenly man. This is why in icons which portray him, he is shown as having wings. These are not of course physical wings, they are the spiritual wings of the dove, of one who prays unceasingly, which is the task of all, but especially of those in the monastic life.

The Holy Baptist stands at the very end of the Old Testament, but also at the very beginning of the New Testament. That is why he appears at the beginning of the Gospels. He opens up a new way and answers in a new way the old question which people have posed from ancient times and which I gave at the beginning of this sermon: ‘What is the purpose of life?’ John the Baptist who never married, who remained a virgin, who prophesied, tells us that the purpose of life is to be spiritually fruitful. This is his prophetic revelation to us. Whether we are called to marriage and having children or not, we are called to bring forth spiritual fruit, to improve the world and not to worsen it, to be fruitful, and not to be barren, as his parents had been.

His spirit is thus utterly opposed to the modern world. This says that if you marry, it matters not if you have children or not. Thus the purpose of marriage is reduced to a sort of legalised fornication. Worse still, some who do desire to have children decide that they do not have to have children as nature decides. They can have a career, amass huge amounts of money and then with the perverted lights of modern science have a child when they are in old age. Then they can choose the sex of the child, the colour of its hair and eyes, the occupation of a donor-father, even rent another’s womb for the child to be born in. They can have a ‘designer baby’. The child thus becomes a toy, of as much importance as a pet dog. And when you are fed up with the child, it can be sent away to a private school, cast away like the old toys of a spoilt child.

But John the Baptist tells us that we are to be spiritually fruitful. He is the model of all children. We should have children because we desire them, because we pray to have them. We should pray that our children will call us and others to repentance. And if the Lord does not grant us to bear children or we have already borne them, then we are to bear virtues instead. And we are to bring up and refine and cultivate our virtues with as much care and love and commitment as children. And thus our virtues will also be calls to repentance.

Today, through his birth, the Holy Forerunner John calls us all to repentance. Let us make ready for the Lord.