Nativity Week: Don’t Be a Footnote… 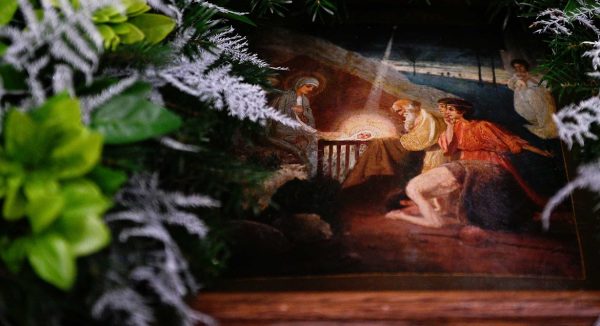 Our hearts today are filled with anticipation dear ones, as we have reached the week of the Nativity of our Savior.  We are nearing the end of this long period of preparation and we now stand at the threshold of the Winter Pascha, awaiting that moment that changes EVERYTHING FOR US!

This week, the Church will be transformed.  The white altar clothes will be brought out as THE LIGHT comes forth from this little city of Bethlehem.  God didn’t come into the world in some massive capital city.  The King of Kings wasn’t born in a featherbed made from the cedars of Lebanon.  He wasn’t surrounded by the riches of the Jewish Kingdom like so many of His forefathers.  The Savior, the Messiah of us all, came into this world in the middle of a damp, cool, and rocky cave, being warmed by the breath of the animals who dwelt there.

Because the truly important things in life are not riches, gold, or beauty.  From a Divine Perspective, none of these things matter.  What is important, is humility and repentance.

“The Genealogy Gospel” of Matthew is perhaps one of my favorite passages of the entire New Testament, because it serves as a wonderful link to the past!  As we go through this list of names, there are probably many that you recognize from Holy Scripture and many that you do not recognize.  If you don’t recognize many of the names, it is not because you don’t open your bible often enough.  Rather it is because for a good majority of them, there is not a lot written!

We learn about a good portion of this lineage of Christ in 4 books:  1st and 2nd Samuel, and 1st and 2nd Kingdoms.  After we get through the story of David and Solomon, there is a line that keeps popping up over and over about most of these other names, who were the kings of both Israel and Judah.  In a few verses, they will say something about them and then you hear: “Now the rest of the words of _______, and all that he did…are they not written in the book of the Chronicles of the Kings of Israel?”

Scripture doesn’t go into details about figures like King Omri, who from a historical perspective was a big deal.  He was the founder of the Omri Dynasty, and according to scholars, was one of the most important rulers ever in the history of Israel.  He conquered the territory of Moab, brought peace to the Northern Kingdom, formed alliances, even founded the city of Samaria where he made his capital!  All of these earthly achievements in his 12 year reign, and this is what the bible says about him:

“In the 31st year of Asa the King of Judah, Omri became king over Israel and reigned for 12 years.  Omri bought the hill of Samaria for 2 talents of silver from its owner Shemer.  Then he built on the hill and called the name of the city Samaria, after the name of Shemer, the owner of the hill.  Omri did evil before the Lor, and did worse than all who were before him.  For he walked in the ways of Jeroboam the son of Nebat, and in the sins he committed and caused Israel to commit.  “Now the rest of the words of Omri, and all that he did…are they not written in the book of the Chronicles of the Kings of Israel.”

Why is it that King Omri only has 3 verses in the Bible, 1 of which says that his greatest accomplishment was to buy a hill?  Because Holy Scripture is given to us from a Divine Perspective…it comes from God.  To God, riches, power, beauty, and strength are meaningless.  The political exploits of a king long forgotten by the world accomplishes nothing in the eyes of eternity.  What God treasures the most is humility and repentance.

In contrast to King Omri, King David is a big deal in Holy Scripture, but until 1993, outside of the Bible, no one had discovered any archeological evidence that He was even a real person!  In the world and in non-biblical history, he wasn’t a big deal.  But to us, and through the Divine Perspective of God, David is held as an example that we must all follow.  He was a man who was not perfect, but had a love for God in his heart.  He fell many times, even to the point of adultery and murder, yet no matter how many times he had fallen, David ran back to God with repentance.  David is even credited with giving us Orthodoxy’s most popular psalm, Psalm 51, which we call the psalm of repentance.  He literally gave us poetry on how to humble ourselves before God, just as God humbled Himself to be with us in the middle of the damp cave in Bethlehem.

This week, there will be so many distractions.  Last minute shopping…cooking for our families…figuring out plans on how to come together in this unique time…all of these things are great in and of themselves, but from a Divine Perspective, they do not matter.

If my life were written about in Holy Scripture, and if my normal activities did not include coming to Church with Humility and Repentance on Christmas Eve and Christmas Morning, the verse would read: “Fr. Gabriel and Family didn’t worship God for the Nativity…Now the rest of the words of Fr. Gabriel, and all that his family did for Christmas…are they not written in the book of the Chronicles of the Kings of Israel.”

Brothers and Sisters, let us not be a footnote in the eyes of our Lord, but rather humble ourselves and join together in worship and celebration, as we approach the coming of our Savior into the world…Amen.