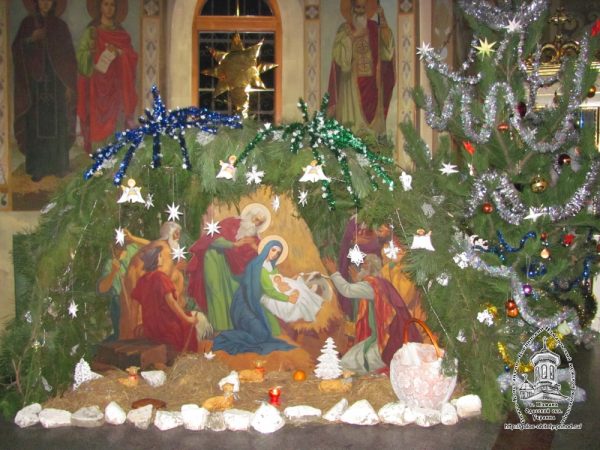 As we enter into our last days of preparation for celebrating our Lord’s Nativity this week, we need to consider what we are hoping for.  No, that does not mean focusing on what presents we want to receive or what fine foods we anticipate enjoying for Christmas dinner.  It means attending to the long-awaited Savior as we entrust ourselves to Him.  In order to do that, we must allow our hopes for whatever we want in this life to be called into question by the God-Man, Who was not born to acquire or give earthly power or success in any conventional sense, but to fulfill a kingdom not of this world that stands in prophetic judgment over even our best attempts to set things right according to our own agendas and desires.

Christ is born to fulfill the ancient promises to Abraham, who “looked forward to the city which has foundations, whose builder and maker is God.”  The many generations of preparation for the Savior’s birth did not occur through the unbroken progress of any earthly city, kingdom, or culture, but through periods characterized by slavery, exile, injustice, and apostasy.  The prophet Samuel was the last of the judges of Israel over a thousand years before Christ was born.  When his sons ruled unjustly, the people asked for a king so that they could be like the other nations.  God told Samuel, “Heed the voice of the people in all that they say to you; for they have not rejected you, but they have rejected Me, that I should not reign over them.”  (1 Sam. 8:7) We do not have to know much about the Old Testament to know that wanting to be like the others nations is the exact opposite of what God intended for His people.  Their kings were not unlike the powerful of any time and place with David, the greatest of them, known for his repentance from the sins of murder and adultery.  Even his son the wise Solomon fell into the worship of false gods.  Because of Israel’s ongoing unfaithfulness, the kingdom divided into two, with both eventually going into exile after being defeated at the hands of their enemies.

These events were so important that Matthew describes the Lord’s genealogy accordingly:  “So all the generations from Abraham to David were fourteen generations, and from David to the deportation to Babylon fourteen generations, and from the deportation to Babylon to the Christ were fourteen generations.”  The prophet Daniel and the three holy youths Ananias, Azarias and Misael all went into captivity in Babylon, where they refused to worship other gods and were miraculously delivered from death, respectively, in the lions’ den and the fiery furnace.  Christ, before His Incarnation, was with the youths in the flames.  Being unconsumed by the fire, they also provided an image of the Theotokos, who contained the Son of God within her womb without being consumed by the divine glory.

It was not by entrusting themselves to some scheme for acquiring earthly power that these and other prophets foreshadowed and foretold the coming of Christ.  Far from it, for they refused to abandon their hope in God and to worship idols, even when it seemed certain to lead to their deaths.  Consequently, they are among those who “suffered mocking and scourging, and even chains and imprisonment. They were stoned, they were sawn in two, they were killed with the sword; they went about in skins of sheep and goats, destitute, afflicted, ill-treated—of whom the world was not worthy—wandering over deserts and mountains, and in dens and caves of the earth.”  They did so because they lived in expectation of the fulfillment of a promise that would not come in their lifetimes, “since God had foreseen something better for us, that apart from us they should not be made perfect.”

Though no one forces us to choose today between idolatry and faithfulness, we often freely worship idols when we ground the meaning and purpose of our lives in some vision of success in the world, regardless of how noble it may seem.    Even without being forced into exile, we easily become accustomed to hoping for nothing more than a better life in Babylon, however we may define that.  We face the temptations that our Lord’s ancestors did, and we regularly fall into some version of the same sins they committed. On the one hand, it should be reassuring that the Savior’s genealogy included people guilty of murder and adultery and involved in other scandalous situations, as well as Gentiles.  They remind us that He came to call not the righteous of one nation, but all the world’s sinners to repentance.  On the other hand, the checkered past of His ancestors should also remind us of how easy it is to entrust ourselves to false hopes that extend no further than the grave.  Our responsibility is even greater than that of those who came before us, for we have received the fullness of the promise.  Time and again, however, we live as though the promise had not been fulfilled, as though a Savior had not been born.

When the Son of God became a human being for the salvation of the world, He did not do so with all the trappings of the false hopes we typically embrace.  He was not born in a palace or in a family of great wealth, power, or fame.  There was certainly no sin involved in the virginal conception of our Lord, but the circumstances were hardly conventional.  His teenage virgin mother became pregnant by a miracle of the Holy Spirit.  Joseph, the older man to whom the Theotokos was betrothed as her guardian, would have divorced her quietly, had not an angel told him the truth about the situation in a dream.  Living under the military occupation of the Roman Empire, the Lord’s parents had to go to Bethlehem for a census at the time of His birth, where He came into the world in the unthinkably lowly circumstance of being born in a cave used for a barn with an animals’ feeding trough as His crib.

Despite the temptation throughout Christ’s ministry to overthrow the Romans by force and set up an earthly reign, He refused to be distracted from His vocation to conquer death itself, which required that He submit to execution on a Roman cross and wearing a crown of thorns, being mocked as the king of the Jews.  Though the false hopes of His disciples had been crushed, the Savior rose in victory on the third day in a fashion no one expected.  His disciples then learned to hope anew for the fulfillment of God’s promises in ways that required a complete change of mind and heart, for they took up their crosses as they served a kingdom not of this world.  Along with countless generations of martyrs and confessors, they repudiated the idolatry of serving themselves as they learned to hope only in the Lord.

In the remaining days before Christmas, let us embrace the radically disorienting calling to hope in nothing and no one other than the God-Man Who is born to heal and fulfill all who bear the divine image and likeness.  His human lineage shows that He came for people as conflicted, confused, and compromised as we are.  They wanted to be like the other nations and endured exile in foreign lands as a result. We wander as aliens from the everlasting joy of His Kingdom whenever we put serving ourselves or any worldly goal before obedience to Him.  Like Daniel and the three holy youths, it is time for us to refuse to worship false gods and to trust that our Savior will not abandon us to destruction in the lions’ dens and fiery furnaces of life in a world enslaved to the fear of death.  Through prayer, fasting, generosity, and repentance, let us complete our preparation this week to receive the God-Man born for our salvation at Christmas, for He alone is our hope and the hope of the entire world.