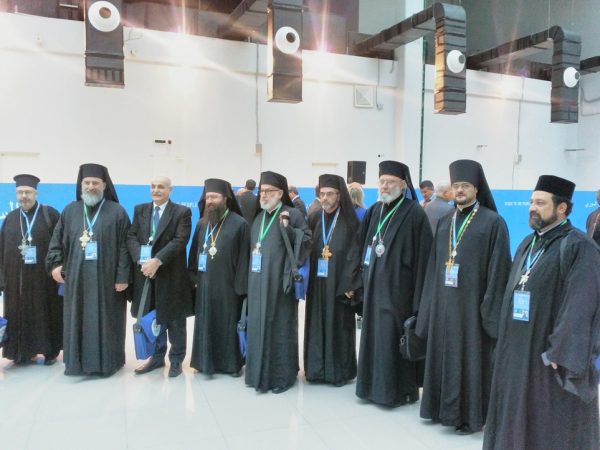 January 29-30, 2018 – The Congress of the Syrian National Dialogue began its work at the Olympic Media Center in Sochi. The Russian Orthodox Church attends it as an observer. With the blessing of Metropolitan Hilarion of Volokolamsk, head of the Moscow Patriarchate department for external church relations (DECR), the sessions of the Congress are attended by Hieromonk Stephen (Igumnov), DECR secretary for inter-Christian relations, and Ye. Bakhtin, DECR secretariat for inter-Orthodox relations.

Assembled for the forum are over 1500 participants. Along with representatives of the Syrian government and various groups of the opposition – internal, external and armed – the Congress is attended by a large group of Syrian Christian and Muslim clergy, consisting of 93 people. The delegation of the Orthodox Church of Antioch is the largest one. It is led by Metropolitan Saba of Bosra, Horan and Arabic Mountains.

The Christian bishops and priests visited the chapel arranged in the Media Center, in which they lifted up prayers for the success of the Congress. The participation of religious leaders in an integral part of the process of settlement of the situation in Syria and has a considerable peacemaking potential. The Russian Orthodox Church, in its turn, takes efforts to promote the peace initiative.

Considering the suffering of the Syrian people, the Congress is called to unite one again all the sections of the society and reanimate the procedure of reaching a political settlement with the decisive participation of the Syrians themselves. Among important steps towards it is the formation, at the Sochi forum, of a constitutional commission, which is to continue its work under the UN aegis and to include representatives of all the political and religious associations in the country.