Source: OCA
Natalya Mihailova | 27 August 2015
Five young adults representing the Orthodox Church in America are among the forty-plus participants from around the world attending the international Orthodox youth festival, “Attaining Conciliarity,” at the Monastery of the Annunciation’s Academy here during the last week of August 2015. 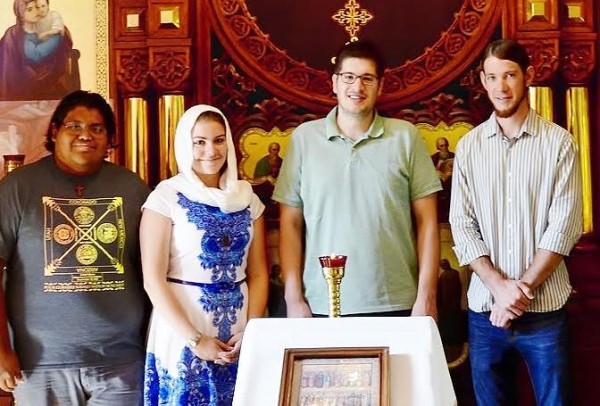 Sponsored by Syndesmos, the World Fellowship of Orthodox Youth and hosted by the Orthodox Church of Poland, the gathering marks the first time since 1998 that youth from the OCA are participating in such an event.

Archpriest Dr. Chad Hatfield, Chancellor of Saint Vladimir’s Seminary, Yonkers, NY, is the keynote festival speaker.  His topic is “The Conciliar Model of the OCA: The Dream of Saint Tikhon.”  Also slated to address the gathering is Archpriest Vladimir Misijuk of Bialystok, Poland, who will speak on “Attaining Conciliarity: The Task of our Daily Life.”  Father Vladimir is an alumnus of Saint Vladimir’s Seminary and former Syndesmos General Secretary.

“Since its establishment in Paris, France in 1953 as a way to connect Orthodox youth and young adults the world over, Syndesmos has worked closely with youth in North America, Western Europe and the traditional ‘Orthodox homelands,’” said Andrew Boyd, OCA Youth Director.  “This was especially crucial in the late 20th century as the only means to connect Orthodox youth in eastern and central Europe with their counterparts elsewhere.  While still a university student, the late Father John Meyendorff was among Syndesmos’ founders, while other Influential members of Syndesmos as young adults and beyond include the late Father Alexander Schmemann, the late Patriarch Ignatius of Antioch, Patriarch Kyrill of Moscow, Archbishop Anastasios of Albania, Archbishop Demetrios of the Greek Orthodox Archdiocese of North America, Metropolitan Kallistos Ware, and countless others. The OCA has a strong tradition of supporting Syndesmos through its general secretariat, elected vice-presidency and board membership and by providing interns and staff members.  In 2009, I had the honor of serving as a Syndesmos intern.”

Upon their arrival in Poland, the OCA representatives were hosted at the Warsaw Theological Seminary before leaving for Bialystok and Suprasl.  As part of the festival program they will visit the Orthodox women’s monastery in Grabarka, one of the Orthodox Church of Poland’s holiest sites, and participate in celebrations marking the 35th anniversary of the Orthodox Youth Fellowship of Poland.