The Oldest deacon of the Chinese Autonomous Orthodox Church died 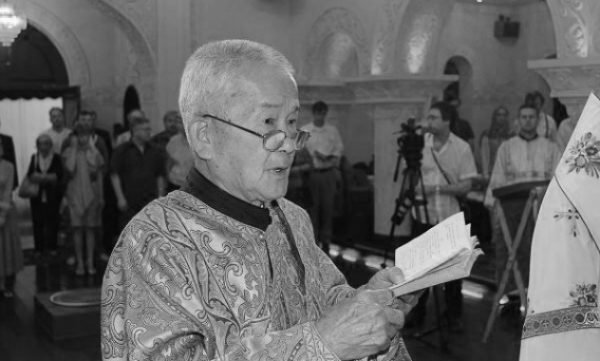 Lu Yafu was born on April 21, 1927, in Beijing. He lived not far away from the Russian Ecclesiastical Mission and was baptized as a child. He attended the Chinese-Russian preliminary school in the Beiguan district. In 1950, he graduated from the one-year course for training clergy at the Russian Ecclesiastical Mission in China, in which he studied together with the future Father Gregory Zhu Shipu who revived Orthodox divine services at the church of the Protecting Veil in Harbin since 1986 and celebrated there until his death in 2000. Among Lu Yafu’s school mates were also Father Alexander Du Lifu, the spiritual director of the Orthodox community in Beijing, in which he served till his death in 2003; Father Pinnas Du Eng Sheng, the last rector of the St. Alexander Nevsky’s church in Wuhan; Father Anikita Wan Yulin, the last rector of the St. Nicholas’s in Harbin, and other Chinese clergy.

Father Evangel was ordained in June 1950 by the head of the 20th Russian Mission in China, Archbishop Victor (Svyatin) of Beijing and China, at St. Innocent’s in Beiguan. After Bishop Simeon (Du) was appointed in September 1950 as administrator of the diocese of Shanghai, Deacon Evangel followed him to Shanghai. In 1951, he was elevated to the rank of protodeacon. He did not accept the rank of priest out of modesty, considering himself unworthy of priesthood.

He served at the Shanghai Cathedral of Our Lady the Help of Sinners until it was closed in 1965. After that the authorities assigned Father Evangel to work at the city real estate administration in which he worked till retirement.

In 2008, the Day of the Pentecost, with the permission of the authorities, he took part for the first time in the divine service at the Russian General Consulate. On that day, Protodeacon Evangel was presented with the Medal of St. Sergius of Radonezh (First Degree) awarded him by His Holiness Patriarch Alexis II of Moscow and All Russia on the occasion of the 50th anniversary of the autonomy of the Chinese Orthodox Church. Since that time, Gather Evangel took part in divine services celebrated by Archpriest Alexiy Kiselevich in Shanghai.

In June 2012, he was among concelebrants of Metropolitan Hilarion of Volokolamsk, head of the Moscow Patriarchate department for external church relations, at St. Nicholas’s in Shanghai.

On May 15, 2013, during the first ever visit of the Primate of the Russian Orthodox Church to China, His Holiness Patriarch Kirill of Moscow and All Russia celebrated the Divine Liturgy at the Shanghai cathedral attended by a vast confluence of the faithful. Among his concelebrants was Protodeacon Evangel, who exclaimed liturgical petitions in Church Slavonic in a clear youngful voice.

During Christmas 2016, Father Evangel came to St. Nicholas’s in Shanghai for the last time to pray and take communion. Although his disease prevented him from coming to church, he communicated regularly, the last time in late January 2017.

The funeral service for Protodeacon Evangel Lu Yafu will take place on March 9 in Shanghai.