On Priestly Formation:Small is Beautiful

The seeds planted through an Orthodox seminary must be the seeds which will blossom into the fruit of holiness. Metropolitan Hierotheos of Nafpaktos speaks to this when he reminds us that the goal of the Christian life is to produce saints. How much more the formation of the priests of the Church must be founded upon listening to, learning, and emulating the lives of the saints. Orthodoxy does not have celebrities, only saints.
Archpriest Geoffrey Korz | 15 May 2009 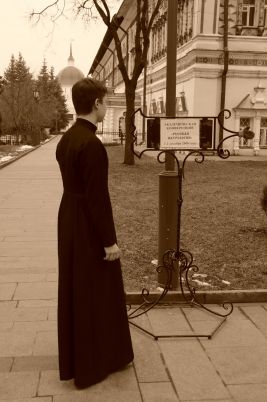 Did you hear the joke about the Protestant minister who had so many academic degrees, he could actually spell out short sentences with the letters after his name? If you haven’t heard it, don’t feel left out: it’s a true story, not humour.

Academia has for centuries been the crucible of the formation of Protestant clergy. Surrounded by great minds, classical philosophy, and secondary sources, Protestant seminaries have mastered the art of planting seeds in the minds of their students, and through them, in the hearts of their faithful. Modern universities are but the secular child of the grand Protestant seminary: a massive institution of learning designed to hone the rhetorical skills of the teacher, speaker, and minister.

For anyone who has walked the august streets of Boston, Massachusetts, and its sister city of Cambridge, Massachusetts, the sense of awe evoked by the great universities of the city of American freedom can leave Canadians and all Orthodox Christians with a real inferiority complex. It is for this reason that the last two centuries have deeply shaped the intellectual mind, as well as the emotional and spiritual heart, of Orthodox Christians on this continent as it pertains to the idea of the theological seminary.

While the concept of a theological school is not foreign to the Orthodox world, the kind of seed it plants, and the method by which it is planted, differs markedly from the American Protestant model, which is fundamentally academic, geared to attempting to understand Christ using the human mind, divorced from the ascetic struggle, in a contrived and oftentimes utopian academic enclave.

Orthodox academic institutions in the west have often suffered from this Protestant thinking. From the first foundations of Orthodox academia in Paris after the Revolution in Russia, to many of the attempts at creating seminaries amid the Protestant vacuum of North America, the recapturing of an authentic Orthodox spirit in schools of priestly formation has been a difficult struggle for the Orthodox refugees of our land.

One of the first tasks of Saint Arseny of Winnipeg was the creation of a seminary for the formation of priests in Canada, an effort matched by his work in the establishment of a school alongside the monastic community at St. Tikhon’s monastery. Someone once said that only asceticism will save the clergy, and of course, this fundamental principle of authentic monastic community life as a key ingredient in priestly formation is one part of the universal inheritance of the Orthodox Church.

It is this universal inheritance which must shape any Orthodox seminary. Far from creating an “American” or “Canadian” program, Orthodox seminary formation must in every way bring together the universal witness of the Church across time and around the world. This approach must be cut through with the fullness of Holy Tradition, since this is the true gift that the Church has for the world: the collected experience of the saints across time. To do anything less, to fall into the trap of creating a “new and improved” program, is a complete departure from this inheritance, and a complete waste of precious time in the life of a seminarian.

Saint John Maximovitch, one of North America’s spiritual giants once commented that it is a good thing to encourage the faithful to partake of frequent Communion – but never without the fullness of preparation, based on the experience of the Church, not the cleverness of men. The concept of seminary instructors who were not active and experienced clergy themselves would have been quite foreign to Saint John, who laboured tirelessly in mission work in a dozen countries. A seminary that is a separate world – an academic world, populated and run by academics or clergy who have become academics – is not enough to fill and to form the hearts of the men who would be priests.

Perhaps the greatest distinction between Protestant and Orthodox life is the presence of asceticism within the Church. An authentic Orthodox seminary life would by necessity capture the fullness of this ascetical spirit as well, with every student being recommended by a confessor or spiritual father who continues to regularly hear the confession of the seminarian, including the time of their ordination and afterward. A daily rule of prayer that is regularly discussed with the confessor would be part and parcel of this, along with fasting and a sincere effort to live out every aspect of life as an Orthodox Christian. Thus, seminary is not “camp”, either in its design or in its product: it is not a chance to “build community”, like a kind of religious high school, but rather to plant the seeds of authentic spiritual struggle in the hearts of future priests – seeds without which future clergy will simply crumble in their parishes.

Since seminary life cannot be a world unto itself, it must be intimately connected with parish life, not simply on a campus, but in Orthodox communities. In short, it must be living and alive, in order to avoid the intellectual disconnect of textbooks and lectures that befalls those in Protestant seminaries, including the philosophies of literary criticism, and the rejection of inherited Holy Tradition as merely “custom”. This is the cold, calculated approach to Orthodoxy that builds efficient corporate congregations in the Protestant style, but fails miserably to build Orthodox parishes that are truly spiritual hospitals.

The seeds planted through an Orthodox seminary must be the seeds which will blossom into the fruit of holiness. Metropolitan Hierotheos of Nafpaktos speaks to this when he reminds us that the goal of the Christian life is to produce saints. How much more the formation of the priests of the Church must be founded upon listening to, learning, and emulating the lives of the saints. Orthodoxy does not have celebrities, only saints. As such, authentic Orthodox seminary formation would discourage any cult of academic celebrity status, which is entirely foreign to the Orthodox spirit, and instead focus on those holy ones through whom God has manifest His grace through miracles, intercessions, and incorrupt relics, not merely bestselling books and successful lectures. As far as the saints of North America are concerned, one practical way this applies to missionary work on this continent is the practical need to include a couple courses in a second language of the seminarian’s choice. Just as Saint Innocent learned to serve the Divine Liturgy in numerous native languages in Alaska, and Saint John accomplished the services in languages as diverse as Dutch and Chinese, Orthodox seminaries in North America follow in the footsteps of the saints when they go beyond training seminarians in management skills for parish maintenance, but offering the cultural and linguistic tools to complete domestic mission work in the most culturally diverse corner of the world – Canada and the United States.

The greatest inheritance in the world has been given to the Church through Her saints, Her Holy Mysteries, and her ascetical tools for life. In building authentic Orthodox seminaries, Orthodox Christians in North America have such a vast and rich and spiritually effective depth of help, that we would be foolish to fall into the old, often repeated errors of following the heterodox path of seminary life. Instead, by the prayers of the saints of this land, let us run the race set before us, drawing on every gift we have been given through the fullness of Holy Tradition.