Open to all call

Source: Incyprus.com.cy
Natalya Mihailova | 22 April 2014
There will only be real progress in the negotiations for the Cyprus problem if Greek Cypriots are allowed to visit all their churches in the Turkish occupied areas, Archbishop Chrysostomos II said yesterday. 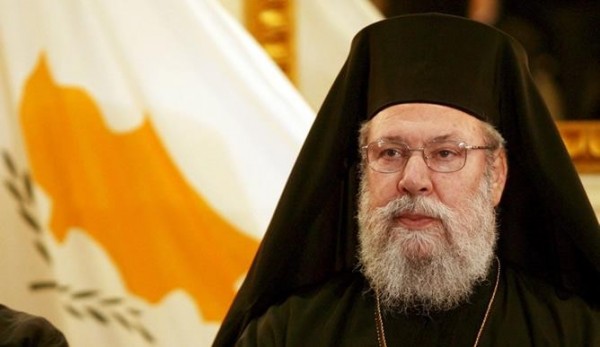 The Archbishop was commenting on the Good Friday liturgy that took place at the church of Saint George Exorinos, in Turkish occupied Famagusta. Thousands of Greek Orthodox and scores of personalities, including foreign diplomats, had attended the ceremony – the first Good Friday service held there in 57 years.

Officiated by the Bishop of Constantia and attended also by the representative of the mufti of the Turkish Cypriot community, it was hailed by Famagusta Mayor Alexis Galanos as a symbol of reconciliation and hope.

The Archibishop said the images sent abroad through the live TV broadcasts were false as they showed Turkey as being democratic.

The Archbishop went on to say that the liturgy took place only in one of the Greek Cypriot occupied churches, adding that the Turkish side must allow Greek Cypriots to visit all the churches in the occupied areas.

He also pointed out that many mosques and other Muslim sites have been restored by the Greek Cypriots, adding that the Turkish side should do the same for all of the 500 Greek Oorthodox sites in the occupied side.

There will be a second mass on Wednesday at the Church of Saint George Exorinos, which lies within the walled city of Famagusta, close to the fenced off area of the town of Famagusta, known as Varosha.

It is used as an art workshop by a Turkish Cypriot university.