Source: The Daily News
FAMAGUSTA, Cyprus (AP) — An unexpected moment during the Good Friday service in a long-abandoned church in Cyprus' breakaway north illustrated how religion is helping to bring together Christian Greek Cypriots and Muslim Turkish Cypriots on this ethnically divided island.
Natalya Mihailova | 21 April 2014 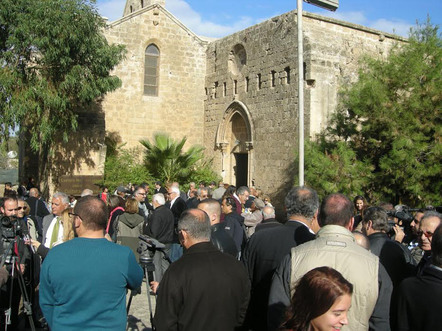 It came when Turkish Cypriot Umit Inatci handed the key of the church of Agios Georgios Exorinos in the medieval center of Famagusta to the city’s Greek Orthodox Metropolitan Vasilios, saying: “This is not gift, it’s something that is surrendered to its owner.”

Rapturous applause greeted the announcement by Inatci, who helped make possible the first Holy Week service at the 14th-century church in nearly 60 years.

Among the hundreds of faithful there was Mikis Lakatamitis, who was baptized at the church eight decades ago. Tears welled up in his eyes as worshippers lined up nearby to kiss an embroidered cloth depicting Christ’s preparation for burial.

“I want to live in this moment because I don’t know if I’ll relive it again,” said Lakatamitis, whose family abandoned their nearby home at the start of ethnic strife in the late 1950s.

Cyprus was divided along ethnic lines in 1974 into a Greek Cypriot south and Turkish Cypriot north after Turkey invaded following a coup aiming to unite the island with Greece.

For decades, there was no contact between the religious leaders of the two communities. In the north, about 500 churches and monasteries — many hundreds of years old — were left to ruin, looted or converted for other uses. In the south, only eight of about 110 mosques still operate.

But that changed in 2009 with a kind of faith-based diplomacy that has quietly been conducted between the leader of the island’s Greek Orthodox Christian Church Archbishop Chrysostomos II and Turkish Cypriot Muslim Grand Mufti Talip Atalay.

The Good Friday service was the result of a grassroots initiative by ordinary Greek and Turkish Cypriots seeking to chip away at the wall of mistrust built up over decades.

“Perhaps we all understood that being constantly at odds with each other is getting us nowhere,” said Nikos Karoullas, a member of the citizens’ movement that spawned the initiative. Karoullas said Turkish Cypriots warmly embraced the idea of the church service. Abandoned since the late 1950s, the church was later used as a cultural center by a nearby university.

“This helps us to understand that we share the same country,” said 35-year-old Xenia Constantinou. Katerina Mina, whose parents hail from Famagusta, said she’s hopeful for a permanent peace that make such services routine rather than the exception.

Although the island’s conflict was never about religion, clerics have played an outsized political role in the past. The conflict that has left Nicosia as the world’s last divided capital boils down to power sharing and territorial control between the majority Greek Cypriots and minority Turkish Cypriots. But the Good Friday service is viewed as an example of how religion can help mend the island’s ethnic division in a part of the world where it has often been used to drive a wedge between people.

The archbishop has historically wielded great influence over the Greek Cypriots as the guardian of their ethnic identity— a vestige of the island’s Ottoman-ruled past. That culminated in the 1960 election of Archbishop Makarios III as Cyprus’ first president after independence from British rule. The charismatic Makarios held on to power until his death in 1977 effectively ended a blurring of lines between church and state.

The church’s influence over political matters has faded to the point where it can no longer sway public opinion, University of Nicosia Law Professor Achilles Emilianides said.

But Chrysostomos, a firebrand who famously told Pope Benedict XVI on a 2010 visit to Cyprus that Turkey seeks to conquer the entire island and erase Greek and Christian culture from the north, remains a force.

A recent poll showed most Greek Cypriots view the Orthodox Church as the only credible institution in the wake of the country’s recent near-bankruptcy.

The faith-based meetings have produced small — but symbolically significant — steps. Last October, they agreed on lifting bans preventing Atalay and an Orthodox bishop from crossing into the south and the north respectively. Chrysostomos for the first time accepted Atalay’s invitation to a meal at his office in the north.

Anastasiades hailed the religious rapprochement as proof of “the positive role that religion can play in resolving political and other differences.”

The positive vibes from the religious leaders’ meetings have also helped the work of a joint Greek and Turkish Cypriot committee tasked with restoring places of worship and other monuments across the island, including starting work on the highly revered but crumbling Apostolos Andreas monastery.

“All places of worship should be respected fully and unconditionally, wherever they may be located,” Atalay said.

“We as religious leaders are obliged to use a different language than the politicians, otherwise a solution will never come,” he said