Imagine the worldwide outrage if the Pope resigned and the Italian government insisted it have a role in deciding who would take his place.

Leaders of the Greek Orthodox Church in the United States are trying to draw attention to exactly that sort of government interference in their ability to choose a leader.

At a news conference Sunday at Saint Nicholas Greek Orthodox Church in Oak Lawn, kicking off a statewide campaign, Bishop Demetrios, chancellor of the Greek Orthodox Metropolis of Chicago, called on the Illinois Legislature to adopt a resolution supporting religious freedom for his order. 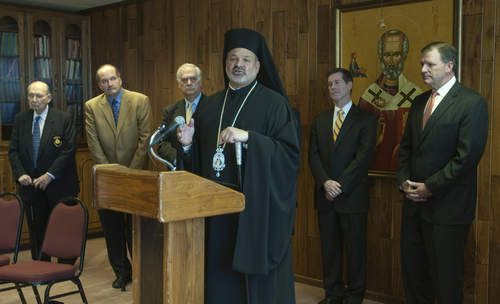 “All of us in this country are free to worship as we please,” Demetrios said. “Not so in Istanbul.”

It has also mandated that the patriarch of Orthodox Church, the equivalent of the Pope, be born in Turkey.

Patriarch Bartholomew, the church’s current leader, was not only born in Turkey but served in the military there.

But since the secular government of Turkey has confiscated church lands and otherwise made it difficult for people to practice their religion, Demetrios explained, there are now only about 2,000 Orthodox Christians left in the country, down from hundreds of thousands that managed to survive even through the Ottomon Empire.

In essence, if the Turkish law is not changed, there may come a time when the Orthodox Church, as old as the Roman Catholic Church, will find itself unable to elect a patriarch in the land where it was founded by Saint Andrew about 2,000 years ago.

There are an estimated 6 million Orthodox Christians in the U.S., more than 1 million in Illinois, which has the third largest population in the nation behind only California and New York.

There are about 250,000 members of the Orthodox faith in the Chicago metropolitan area, and 350 families are members of Saint Nicholas.

In 2007, the Illinois House passed a similar resolution, but it failed to make it out of a Senate committee for reasons that remain murky.

The Turkish government not only has veto power on the patriarch of the Orthodox Church, but also can control those who vote for him, the Hierarchs, by mandating that they too be Turkish citizens.

Therefore, any Turkish resident who desires to become a priest must go to school outside of the country, further limiting the ability of Turkey to generate its own candidates for patriarch.

Demetrios said the Turkish government in recent years has loosened its grip somewhat, allowing about 15 leaders in the church throughout the world to apply for Turkish citizenship, thereby qualifying them as potential candidates to become head of the church.

It has also returned about 380 acres of land it had confiscated for the church surrounding an orphanage.

But the government still refuses to recognize the ecumenical, or world religious leader status, of the patriarch.

The Ecumenical Patriarchate itself, the equivalent of the Vatican, has no legal identity.

Therefore, it can’t even own its own churches.

Over the past 80 years, the Turkish government has confiscated numerous properties, including monasteries, church buildings, an orphanage, private homes, schools and land.

“Left unchecked, the remaining Greek Orthodox community of Constantinople (present day Istanbul — the cultural heirs of the Byzantine Empire — will be threatened and ultimately be no more,” stated a news release issued by Greek Orthodox Metropolis of Chicago.

While passing a state resolution supporting religious freedom in Turkey would be the right thing to do, I wonder what impact it would actually have.

But Turkey is a critical ally of the U.S. given its geographic location and borders with Syria, Iraq and Iran.

It has often aided Iran financially, however, breaking a U.N.-imposed embargo aimed at deterring that nation’s development of nuclear weapons.

Demetrios noted that while the government has imposed religious restrictions that make life difficult for Orthodox Catholics, it has not imprisoned them or engaged in physical intimidation.

Given our own country’s history of religious tolerance, however, it ought to be a slam dunk for state political leaders to denounce restrictions imposed on the church by Turkey.

There are currently only 8 state senators who have agreed to support the resolution, according to church officials, including Bill Cunningham (D-Chicago).

At least 30 votes are needed to pass the resolution.

A citizens committee composed of members of the Greek Orthodox Church has been organized to increase awareness and lobby state legislators in support of the resolution urging religious freedom.

The feel among church leaders in Illinois is the lack of such a group resulted in lawmakers failing to focus on its importance six years ago.

I suppose that’s possible. But the resolution did pass out of the House and nothing in Illinois happens without a reason.

“I have heard of no opposition or objections,” Brady said Sunday.

If the resolution doesn’t make it out of committee this year, I would at least like to hear someone explain why.