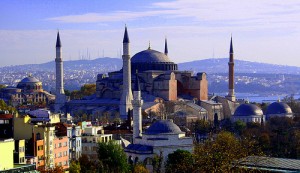 Orthodox Patriarch Bartholomew I of Constantinople has staked out his opposition to convert the Hagia Sophia into a mosque.

Once the patriarchal basilica of Constantinople, the Hagia Sophia was converted into a mosque when Muslims conquered the city. In 1935, Turkey’s government made the building a museum, as part of the secularizing campaign under the leadership of Kemal Ataturk. But today Turkey’s government, while professing the same secular principles, has supported a campaign to build new mosques and convert some historic buildings into mosques. A proposal to make the Hagia Sophia a mosque is now under consideration in the Turkish parliament. ”We want Santa Sofia to remain a museum,” said Patriarch Bartholomew. The Orthodox prelate said that if the museum is converted to any religious use, it should become a Christian church, since it was built for that purpose. 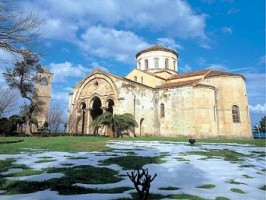 April 16, 2013 In his interview with the German Hurriyetnewspaper, the Mufti of Trabezon (Trabzon) confirmed, “that…