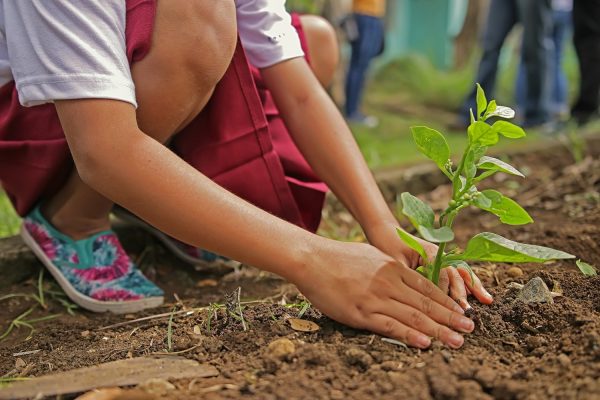 I remember in the balmy days before the pandemic struck and shoved every other news story out of the journalistic limelight that there was a lot of attention paid to the environment. Up here in Canada, for example, one day the news was dominated by the protests over the building of an oil pipeline and how this pipeline would spell doom for us all. Protestors had stopped the trains from running in Quebec (with the inevitable economic impact that brought) and demanded that the Prime Minister meet with them to discuss their demands. There was shouting, and pleading, and bargaining, and apologizing (this being Canada), and handwringing, and more shouting. Then the pandemic hit and it all vanished overnight. It is, I suppose, a lesson in how much control media actually exerts in our culture and our lives.

Concern for the environment is just and right, and conscientious people ought to take thought for such things. But it seems to me that concern for the environment has morphed into environmentalism—i.e. into a kind of religion, taking its place next to other religious “isms”. It seems also to form a staple among the “woke” left, providing ample opportunities for virtue signalling. Getting arrested at an environmental protest is now a bit like getting a merit badge: it bestows rank and haloed sanctity.

It also is a comparatively safe cause to embrace, for the environment is a motherhood issue and everyone agrees that the environment should be protected. It is quite unlike other protest causes, such as abortion or gay rights. Those protesting abortion or the normalization of homosexuality are almost certain to be pilloried in the press and publicly crucified. No such social risk attends protesting a pipeline. That is perhaps why the Green Patriarch is keen to be green: protesting pollution is unlikely to result in time spent in the pillory. In his book Encountering the Mystery His All-holiness spoke much about the necessity of protecting the environment; I do not recall any comparable words in the book about the necessity of protecting the lives of the unborn.

Anyway, the media looks kindly upon environmental causes, so that environmentalists like David Suzuki have practically been canonized. Indeed, the cause is almost beyond the reach of critique. It now attracts oddments: I remember seeing a quote ascribed to St. John of Damascus that “the whole earth is a living icon of the face of God”. It hardly needs stating that St. John said nothing of the kind. Those ascribing the quote to the Damascene were probably remembering modern author Veronica della Dora. In her book Landscape, Nature, and the Sacred in Byzantium, in a section entitled, “the earth as an icon”, she wrote, “In medieval Byzantium…both image and place were experienced as a relation between the visible and the invisible… ‘From the creation of the world the invisible things of God are made clear by the visible creation’, John of Damascus wrote”. Only sloppy scholarship misreading the text would garble the quote and ascribe it to St. John. But that is the point: environmentalism is now fashionable enough to attract such oddities.

These oddities must not tempt us into the opposite extreme of ignoring the environment or writing off present dangers and present opportunities. We must therefore ask: what does Orthodoxy have to say about the environment? We look at three texts from Holy Scripture.

In Genesis 1:26 we read, “And God said, ‘Let us make man in our image, after our likeness, and let them have dominion over the fish of the sea, and over the birds of the air, and over the cattle, and over all the earth, and over everything that creeps on the earth”. The word here rendered “have dominion” is the Hebrew radah. In Numbers 24:19 it is used to describe a conqueror; in Ezekiel 34:4 it describes the power of rulers and kings. The idea here in Genesis is of mankind’s power to tame the wild and unruly, to domesticate, to turn a jungle into a garden. The world left untended is a dangerous place, inhospitable for human life. God gave us the mandate and authority to bend it to our will so that we can find a home here. One can, of course, exercise this dominion badly, exploiting and depleting, turning the jungle into a desert. But the possible misuse of authority does not cancel its proper use. Mankind is meant to exercise godly dominion over creation as God’s stewards.

Also significant for understanding our relationship to the environment is Deuteronomy 20:19, which reads, “When you besiege a city for a long time, making war against it in order to take it, you shall not destroy its trees by wielding an axe against them; for you may eat of them, but you shall not cut them down. Are the trees in the field men that they should be besieged by you?” This precept refers to Israel’s behaviour in waging war, yet it contains wisdom beyond its immediate cultural context. Yahweh commands respect for the creation that He has made, so that nothing should be harmed unnecessarily—including the trees of the forest, which some would cut down as part of a scorched earth policy in time of war. Yahweh’s Law is clear: the trees are no threat to you; leave them alone.

We see this same concern for the humblest parts of creation in Deuteronomy 22:6 which reads, “If you come across a bird’s nest in any tree or on the ground, with young ones or eggs and the mother sitting on the young or on the eggs, you shall not take the mother with the young.” In other words, God’s people must protect God’s creation, as His stewards. They may eat the eggs, but there is no reason to harm the mother along with the eggs.

What goes for the mother bird in her nest goes for other things, such as the earth’s ozone layer, as well as all the other parts of God’s creation. Mankind was created with authority over the world, to rule and protect it in God’s Name as His co-regents. Bluntly put, we may not harm the earth, for it does not belong to us, but to God. We are creation’s steward, not its owner. We are rulers of the earth in precisely the same sense that kings were rulers over their people—viz. we are called to protect it so that it can thrive. Rulers are often called shepherds in the Bible, and a shepherd protects the most defenceless of his flock.

It is not clear how this broad principle works out in every individual situation; that is what makes politics so complex and so interesting. To build a pipeline or not to build, that is the question, and the answer is found as part of the answer to many other questions—usually very complex questions. Not having the answers to these questions, I am hardly in a position to express much an opinion on this specific issue here. But the fundamental principle involved in all such environmental issues is clear enough—we must do what we can to protect the earth upon which we live in order to show gratitude to our Creator for the gift of creation. The complexities of individual questions should not be allowed to deflect us from this fundamental task.

Angry protests and theological oddities can sometimes serve to discredit concern for the environment as the issue becomes ever more politicized. Such politicization tends to divide and polarize, so that people find it easier to shout loudly than to think rationally, to denounce vehemently than to debate calmly. A calm Orthodox head will resist such politicization and polarization, and turn instead to the Scriptures to find answers. These Scriptures teach us that loving God involves loving all that He has made, including our environment. They also teach us that shouting is rarely found in the path of wisdom. Loving creation and treating it with respect begins with that part of creation nearest to us—namely, our neighbour, whatever his political views. It is only as we treat our opponents with love and respect that we will be in a position to find the answers to the questions confronting us.