“Animals are dying, the water is dead”. The disaster in Kamchatka 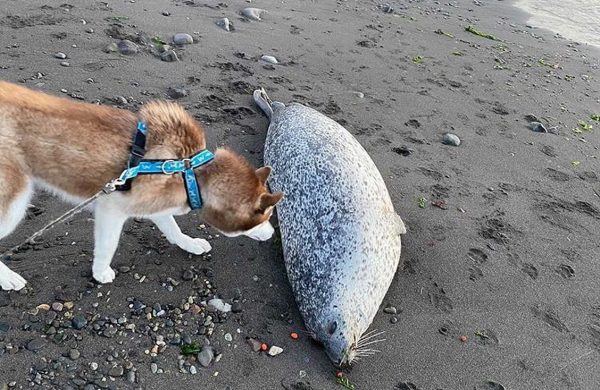 Surfers told about the color change of the water on the Khalaktyrsky beach in Kamchatka at the end of September. In October, in Bolshaya Lagernaya Bay, Malaya Lagernaya Bay, and Babya Bay, dead marine animals were discovered. At the moment, the Kamchatka authorities are considering three reasons for what happened: industrial pollution, natural phenomena, and seismic activity.

On October 5, employees of the Kronotsky reserve together with specialists from the branch of the Pacific Geographical Institute examined the water area from Cape Nalychev to Starichkov Island. In this area, all animals died: up to 95%. Very few shrimps, crabs, and large fish have survived, as “Kamchatka times” reports.

In the Nalychev river, scientists took water samples. In the cape area, the water was an uncommon dark color, brown foam was found, the underwater animal world has almost disappeared.

“There are crabs lying with their bellies upwards and bald urchins”

Rasul Gadjiyev, a Snowave instructor, was one of the first to notice the signs of the environmental disaster.

— I lived on this beach from May to October. I felt the first symptoms about 3-4 weeks ago: when we went into the water, there was a burning sensation in the eyes and on the skin, – he recalls. – My throat was all scratchy. It seemed that the whole team got sunburn, but the symptoms repeated systematically. Even in the cloudy weather, our vision would white out: and we sounded the alarm. Then we all got what we thought was food poisoning. We vomited, we had unstable stool, our body temperature reached 38 degrees. We realized that there were problems with water: its smell and color changed their usual properties.

A week ago, the surfers noticed the unusual behavior of the marine animals. And some of them die for an unknown reason.

— The seals that usually appear out of the water, look at people curiously and dive back, behaved strangely this time: they would come up and stay on the surface as if they did not like it under water, – Rasul continues. – The next day, there was a storm, and after that we saw one seal that got washed ashore. Along the coast, where there are rocks and reefs, the reef animals also washed up on land. This does not usually happen in a storm. At the most, small shells, laminaria, and seaweed could be washed ashore.

The divers went into the ocean to see what was happening at the bottom. They were shocked by what they saw.

— It turned out that in the area of the Bolshaya and Malaya Lagernaya Bays all the inhabitants are dead: crabs lie with their bellies upwards, fish, starfish, and bald urchins got washed ashore: only shells are left of them, – describes Rasul Gadjiyev. – After these statements, the authorities sent their teams to see what was happening to the ocean in the Khalaktyrsky beach area, but they gave them incorrect directions. We observed this a little further, near the Malaya Lagernaya Bay, but the group was sent to the place where there are no reefs. That is why everyone first said that the information about the pollution was fake.

On October 6, a conference was held in the surf camp led by the governor: ecologists, volcanologists, and representatives of the Ministry of Emergency Situations of the Russian Federation arrived there. They will monitor the situation to find the source of the contamination.

— The ecological situation in Kamchatka is in a deplorable state, – Rasul believes. – There are processing plants and waste sorting all over Russia. Here, since we are far from the center, things take their course. Military training areas, waste from missile launchers, buried chemical waste, and huge waste dumps… We do not know what the exact reason is. No one takes the responsibility to confirm what it is. We do not know how long the research operations will last, but the samples taken earlier should be announced on October 8. The previous chemical analysis showed nothing, as at the moment there is no information about what exactly scientists should look for. Research can take a long time. 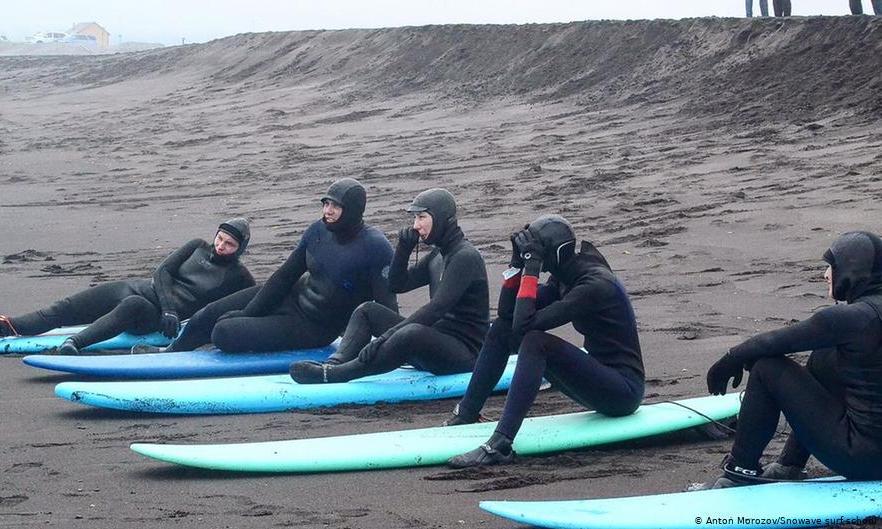 “The spot is moving to the south of Kamchatka: everything is dying”

Vitaly Shikora, a diver, has dived three times in the past week and also worked on the water surface in the area of the hypothetic environmental disaster in Kamchatka. He says he does not feel well, although he has not seen a doctor yet.

— After the dive, I felt pain in my eyes, my eyesight became worse and my throat was scratchy. I noticed this after my first dive last Thursday in the Avacha Bay. At first, I did not pay attention to it. But then I started diving in the places where I usually work with tourists, after which I had eye and throat problems again, – he says about his health.

Vitaly Shikora returned to Kamchatka last week. He says that he did not recognize the bay when he started diving.

— I could not believe I was diving in Kamchatka. There were no shellfish, sea urchins, or fish. And at the very bottom, in the crevices, everything is dead, – the diver shared his disappointment. – I did not like the water. It should be transparent at this time of the year, at the depth of 3-5 meters, I could see rocks and seaweed before. Now, it is a strange milky color.

— I went there to see for myself. A lot of sea urchins, octopuses, and fish washed up ashore. All this lies and rots. It is unpleasant to see, – he explains. – Statements that all this washed ashore as a result of a storm are nonsense. I have been living here since 1975, I grew up at the ocean shore, I have been diving for more than 10 years, and I have never seen anything like this. This is some strange chemical effect on the water, due to which everything is dying. The water in the coastal zone is now dead. All microflora and fauna are dead.

Vitaly Shikora and other Kamchatka residents started their own investigation: they help with taking water samples for analysis, they film and post everything on social networks. They want to draw attention to the environmental problems of Kamchatka. “There is no hope for the authorities to act”, – he says.

— The current moves this spot to the south of Kamchatka. It is poisoning the entire East coast. To somehow influence the situation, it is necessary to put great efforts. In the meantime, we have not even been told the reasons for what had happened. Today, my acquaintances dived in the bay areas and they say that what was alive a few days ago is now dead. Everything continues to die, and it is not known how it will end for our ecology, how it will affect large animals living in the sea, – concludes the Pravmir source. 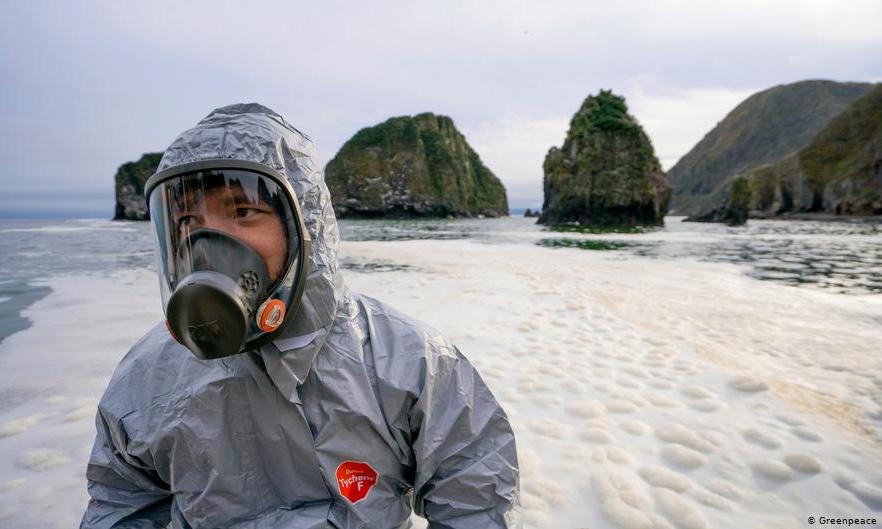 Aleksey Knizhnikov, a manager of the WWF program on environmental responsibility of business, suggests that the death of animals in Kamchatka was caused by the contamination of the entire water column.

— We are inclined to believe that the cause of this pollution is a high-risk technogenic substance that has not only a negative effect at law concentrations, but also a high solubility in water, – he stressed to Pravmir. – If we believe the facts provided by the surfers, their sickness record clearly shows that this is most likely the impact of highly toxic chemicals. If we combine individual factors: the death of benthic organisms, the high water solubility of the substance that has reached a depth of several tens of meters, and its exposure through the mucous membranes – we understand that all these factors together increase the likelihood of the hypothesis that the cause of the pollution is a highly toxic technogenic substance.

Alexey Knizhnikov is convinced that these are not oil products. There are two reasons for this.

— Firstly, we analyzed satellite images and found no large-scale contamination on the water surface either in September or earlier, – the expert lists. – There were only minor discharges from ships that could not result in such consequences. Secondly, oil products cannot affect benthic organisms so quickly: in this case, it would have been a surface pollution. If it was significant, we would have seen oil clumps on the shore and smeared birds. Yet, we have seen nothing like this, therefore, it is not oil products, but other substances.

There is also a hypothesis about natural toxins, which is supported by Andrey Adrianov, a member of the Russian Academy of Sciences. However, according to Aleksey Knizhnikov and his colleagues, it is not completely justified from a scientific point of view.

— We are currently discussing with the Far Eastern microbiologists whether such processes can cause the death of the benthic organisms, – he said. – The most important question is whether there will be the results of the samples that were delivered to Moscow on October 4. We hope that today or tomorrow, they will be analyzed, and then it will be clear whether highly toxic substances are the cause of death of these animals or not.

Most viewed articles
A Great Time to Join the Orthodox Church355
First Church in the Antiochian Archdiocese Named for St. Xenia of St. Petersburg Prepares for Feast Day271
Patriarch Kirill: Not Only People, But Churches Too, Can Depart from God137
My World’s Different104
Brooklyn Street Co-Named for Antiochian Pastor Who Served a Half Century There93
Metropolitan Hilarion: the Church and traditional confessions have done everything possible to improve the situation in Kazakhstan86
Patriarch Porfirije of the Serbia: Our Position on the Church Issue in Ukraine Has Not Changed80
Thoughts on Theophany and Revelation70
1
4-400×6001
Most popular authors
Pravmir.com team574
Frederica Matthewes-Green355
Protopresbyter Themistoklis Mourtzanos104
Peter Samore93
Elissa Bjeletich70