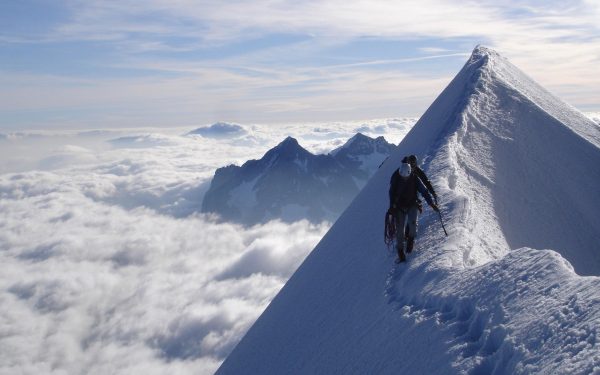 “‘I seek for truth.’  Happy is he who places the accent on the last word: ‘Truth.’  It is far worse with those who proudly emphasize the word ‘seek,’ and are full of vanity because of their position among those continually tending towards truth – ‘Ever learning and never attaining to the knowledge of the truth.’” (2 Tim. 3:7)
+Fr. Alexander Yelchaninov, Fragments of a Diary

My journey to Orthodox Christianity was, like many, a painful one. Growing up in the sheltered world of Seventh-Day Adventism in a tiny school of 30 kids, I often rejected and rebelled against the evangelicalism of my youth. After my parents split up when I was 16, it didn’t take me long to spiral headlong into depression and outright despair.

I drowned myself in rage, eventually plunging myself into the bleak world of black metal noise and anti-Christian philosophies. My youth was one long night in hell. Severe depression was my constant companion, and I was often alone. I wandered down some dark paths, and hurt many people I loved along the way. By the time I hit the reset button on my life and moved halfway across Canada to sort my life out, I was barely over 100 pounds and my skin was green with toxins.

As my life began to reset itself and I healed (thanks to my mother who stood with me in the darkest times), I embarked upon a search for the truth. It did not take long for me to return to my Christian beliefs that I was raised with, despite my sifting through of all kinds of religions and philosophies. For several years, I studied Christianity and found out it really did have a history – one beyond a simple understanding of the Bible, 1500 years of “dark ages”, a Reformation and then for the Adventist, a prophetess named Ellen White. I became engrossed with the lives of the saints, studied apologetics and Christian history, and like many, assumed that Christian history was merely a story of Catholics and Protestants. Orthodoxy was simply not on the map, a mere aberration in church history. In April of 2012, after years of spiritual journeying, I was baptized in the Roman Catholic Church. But the journey was far from over.

I chronicled this journey on my blog Ascending Mt. Carmel, which, though it was started merely as being written for myself, gained a small but loyal following on the internet. Though wide-eyed and excited as a convert, it did not take me long to fall into intellectualism and pride. I came to Catholicism in the first days of my search very innocent. Though I did my fair share of perusing popular Catholic apologetics sites such as Catholic Answers, much of my knowledge of Catholicism came from hagiography and devotional writings, though it did not take me long to delve headlong into the scholastic theology of Aquinas and Anselm, the mystics such as Catherine of Siena and Bernard of Clairvaux, as well as the classic Catholic writings from the Counter-Reformation.

Unfortunately, my life as a Catholic was one of despair and frustration. I became exhausted, and worn out from being in a state of spiritual fear and despair. I became increasingly bitter, angry and irritated at the state of Catholicism, and fell into pridefulness and judgmentalism towards others. Confessions (if one could find a time at a church when confessions were heard) began to feel more like deposits at a “sin bank” than actual healing, and this was augmented by my inherent anxiety that gave birth to a bad case of “scruples.”

It was during this time that I encountered Orthodox Christianity for the first time via a work entitled The Way of a Pilgrim. It was a work that cut through to my heart, and in so doing, showed me such a simple and beautiful faith being lived out. I began to research the saints of the Orthodox Church after the schism between Rome and the other Patriarchates, and could not get enough of their writings, reading the words of St. Seraphim of Sarov, St. Symeon the New Theologian, St. Gregory Palamas, and St. John of Kronstadt. Ironically, I even prepared for my Catholic baptism by reading a work by St. Theophan the Recluse entitled Turning the Heart To God.

As a Roman Catholic writer, it became increasingly awkward to live in the tension of loving the Orthodox Christian faith and its saints so much (even quoting them often more than the Catholic ones) and still being a Catholic. I eventually found myself no longer being able to relate much to specifically Roman Catholic writings, nor able to quote them with much interest. It was the Orthodox saints who spoke to my heart, who literally radiated the love of God to those around them that struck me. Orthodoxy had captured my heart, and I had to fight hard to not let my love of the Orthodox faith and the way it had helped my spiritual life utterly consume me. In Orthodoxy too, I did not have the same difficulties in understanding Church history, and things became clearer to me; as Fr. Artemy Vladimirov remarks, “In Orthodoxy, tradition is not a museum filled with interesting exhibits, but a stream you are to immerse yourself in.”

One particular quotation struck me to the core: near the point of my deciding to become Orthodox, I read an earth-shattering quote that sealed my decision – “The action of grace never leads anyone to despair, but grants the gift of tenderness, joy, long-suffering and peace.” (St. Leonid of Optina)

Against all the fear and terror I felt, against accusations of being an “apostate” and a “schismatic” (though most Catholics I know supported me in my decision), I chose to keep walking forward, comforting myself with the words of Dostoevsky:

“And if everyone abandons you and drives you out by force, then, when you are left alone, fall down on the earth and kiss it and water it with your tears, and the earth will bring forth fruit from your tears, even though no one has seen or heard you in your solitude.”

After eight long years of spiritual searching and soul-mining (and with much love and support from many in my life), I was brought into the Church by Holy Chrismation by my priest whose joy and Christ-like warmth radiated from his very being. I was welcomed like the prodigal son and not in a way that felt like I had to claw my way in, brought into the hospital of the Church just as I was, so that through Christ I might be healed and made whole. My story here continues – though the journey is over, the pilgrimage has just begun.

“The end of each discovery becomes the starting point for the discovery of something higher, and the ascent continues.  Thus our ascent is unending.  We go from beginning to beginning by way of beginnings without end.”
+St. Gregory of Nyssa