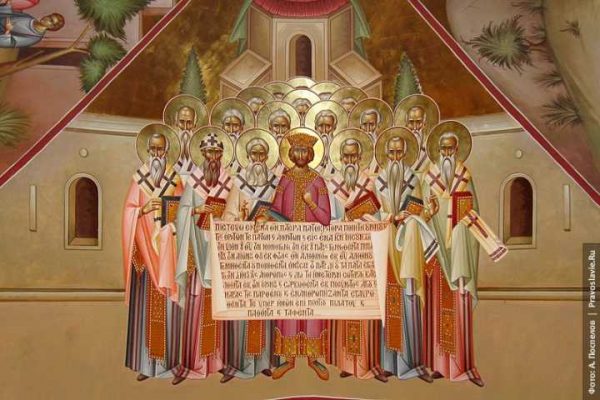 As a former Roman Catholic, I used to always view the Orthodox with a kind of annoyance at what I termed their “crankiness”, their “stubborn nature.” I used to say to myself in frustration, “if they would only stop being so thorny towards us, maybe we could have unity” (this was a justification for myself really, as I was supremely drawn to the Orthodox Church for a long time). As I surveyed the writings of some of the Saints, I became increasingly irritated at their criticisms of us Roman Catholics, and in my mind, I formed a crude caricature of the Orthodox as simply a bunch of old cranks sitting about stroking their beards and talking about everyone was heterodox. Where Rome seemed to show a willingness to dialogue and be nice about everything, the Orthodox seemed to be on the total defensive, as well as being quite critical.

As the saying goes, if one stands for nothing they will fall for anything. I have always said that one can be firm and strong in their holding to the Truth without having to be sinful and nasty towards others who hold to a different opinion.

So let’s examine the Saints of the first thousand years of the Church. We must ask whether, then, was St. Athanasius “hyperdox” and simply being a belligerent crank when he refused to go along with the majority and join the Arian heresy? Was St. Maximus the Confessor a hyperdox grump because he refused to bow to Monotheletism and suffered mutilation and exile for it? Or was St. Basil the Great a stubborn old man for standing against the heresies that blasphemed the Holy Spirit? Hear his own words, when he says that “it would be utterly miserable that the Spirit is blasphemed and true religion is wrecked so easily…” What then should we make of St. Anthony the Great, a humble man of God, who said “defile not yourselves with the Arians. For this teaching is not of the Apostles, but of the demons and their father the devil; and indeed from no source, from no sense, from a mind not right it comes, like the senselessness of mules.” And what of St. Paul the Apostle, who urges us to “have no fellowship with the unfruitful works of darkness, but rather expose them?” Or of St. Jude who speaks of heretics as “raging waves of the sea, foaming up their own shame?”

The Orthodox Church has not failed to provide great Saints who often stood alone against the rising tides of heresy in the world. Truth actually does matter, because Christ matters – the Saints knew this. But our age is one in which anything goes, in which everything is OK except saying something is not OK, and which a false form of tolerance is promulgated. The Orthodox impressed me during my conversion because they stood for something, because they openly said in love that things were not all hunky dory. What did St. Maximus the Confessor say?

“I write these things not wishing to cause distress to the heretics or to rejoice in their ill-treatment — God forbid; but, rather, rejoicing and being gladdened at their return. For what is more pleasing to the Faithful than to see the scattered children of God gathered again as one? Neither do I exhort you to place harshness above the love of men. May I not be so mad! I beseech you to do and to carry out good to all men with care and assiduity, becoming all things to all men, as the need of each is shown to you; I want and pray you to be wholly harsh and implacable with the heretics only in regard to cooperating with them or in any way whatever supporting their deranged belief. For I reckon it hatred towards man and a departure from Divine love to lend support to error, so that those previously seized by it might be even more greatly corrupted.”

For so long as a Catholic, I refused to even acknowledge the words of St. Mark of Ephesus, relegating him to the role of “supreme Orthodox crank” and the entire reason why we Catholics and Orthodox weren’t one today. And yet, was he the stubborn and irascible man that he is often made out to be? Hear his own words:

“We seek and we pray for our return to that time when, being united, we spoke the same things and there was no schism between us,” and further, “Our Head, Christ our God… does not tolerate that the bond of love be taken from us entirely.”

The Orthodox actually stood and stand for something – I respect this. When I analyzed the lives of St. Athanasius, St. Maximus the Confessor and St. John of Damascus, I saw the same continuation of the “last-man standing” for the Truth in the Orthodox Church, within the past thousand years after Rome had separated, in such persons as St. Mark of Ephesus, St. Job of Pochaev and St. Gregory Palamas. Against all odds, sometimes those who held to the Truth stood relatively alone against the zeitgeists of their cultures.

So I saw and continue to see that standing for the Truth does not make one “hyperdox” or a belligerent crank who is unable to live out the Christian Gospel in their own lives. Indeed, the greatest of the saints of the Church, the holiest men and women, stood firm against the notion that Truth was relative, that Truth really hadn’t yet been fully realized or was some long-forgotten concept. Truth is to be spoken in love, but it is also to be defended. Such was the way of the Holy Fathers, such is the way of the Church.

Most viewed articles
Seven Lessons for the New Year from St. Seraphim of Sarov230
A Great Time to Join the Orthodox Church133
New Jersey Governor Signs Bill Legalizing Abortion Up To Moment of Birth96
The Way of Christ Is The Way of Love67
Metropolitan Hilarion Celebrates the 20th Anniversary of His Episcopal Consecration55
Brooklyn Street Co-Named for Antiochian Pastor Who Served a Half Century There32
Metropolitan Hilarion: the Church and traditional confessions have done everything possible to improve the situation in Kazakhstan31
4-400×6001
Sunday of the Samaritan Woman1
How We Worship: the Struggle of the American Experience1
Most popular authors
Priest Luke A. Veronis230
Frederica Matthewes-Green133
Ryan Foley96
Pravmir.com team86
Fr. Theodore Stylianopoulos67
Peter Samore32