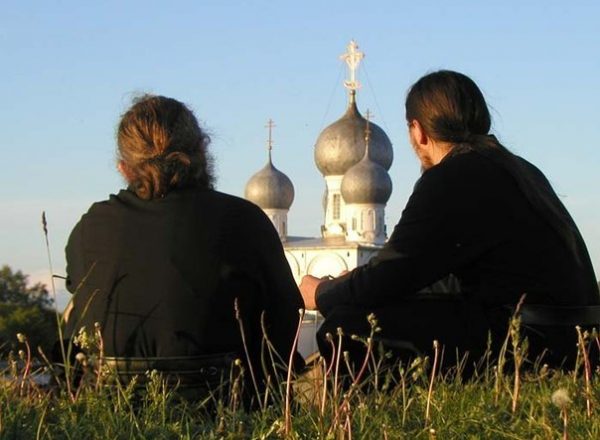 “They wandered about in sheepkins and goatskins, being destitute, afflicted, tormented – of whom the world was not worthy. They wandered in deserts and mountains, in dens and caves of the earth” (Heb. 11:38-39).

The idea that the life of a monk is useless is not uncommon amongst Christians of today. The seeds of such thought can be found in Blessed Augustine’s critiques of certain monastic groups (though he did not attack the monastic life as such), but are mostly to be found in the fruit of the Protestant Reformation in the West. There is decidedly something off when one compares the so-called “Protestant work ethic” with misunderstandings and even anger concerning the monastic life. Objections about their seemingly “not doing anything,” of monastic life as some kind of vacation from an otherwise struggling world, and the notion that monastics simply live off the hard work of others “in the world”, so to speak, abound. Others say that the monastic life is completely antithetical to the Gospel itself, deducing the Gospel to little more than a social-justice movement bent on creating heaven on earth. To such as these, the idea of solitary contemplative life (or that of contemplative life in a community) is more reminiscent of the Neo-Platonism of pagan thinkers such as Plotinus, than of Christ.

“There are people who say that monks ought to be of some use to the world, and not eat bread they have not toiled for, but we have to understand the nature of a monk’s service and the way in which he has to help the world. A monk is someone who prays for the whole world, who weeps for the whole world; and in this lies his main work.”

To object that monks are nothing more than smelly hermits that hide from the world in caves is to completely miss the point of monasticism. Jesus Himself often went to the mountains and solitary places to pray, seeking to be alone with the Father. Is He too to be accused of not living the Gospel? May it never be!

St. John Maximovitch, a wonderworker of our times, speaks:

“Holiness is not simply righteousness, for which the righteous merit the enjoyment of blessedness in the Kingdom of God, but rather such a height of righteousness that men are filled with the grace of God to the extent that it flows from them upon those who associate with them. Great is their blessedness; it proceeds from personal experience of the Glory of God. Being filled also with love for men, which proceeds from love of God, they are responsive to men’s needs, and upon their supplication they appear also as intercessors and defenders for them before God.”

“Let us avoid staying in towns and villages; it is better for their inhabitants to come to us. Let us seek the wilderness and so draw after us the people who now shun us.”

We see this in the lives of so many of the saints – from St. Anthony the Great to St. Seraphim of Sarov, who drew others to themselves because of the grace and holiness that overflowed from them. They lived in the wilds of the forests, in the empty wastes of the desert, in the depths of the earth and still the holy saints of the Church drew the inhabitants of the world to themselves.

To over-simplify the monastic life and its adherents to being little more than a collective of people who “can’t handle the world and its problems” is to miss the point. I remember clearly the Coptic monk Fr. Lazarus el-Anthony saying that he left “the world” because he was weak, not because he was strong and some kind of super-Christian ubermensch.

What does the Savior say on this?

“Now it happened as they went that He entered a certain village; and a certain woman named Martha welcomed Him into her house. And she had a sister called Mary, who also sat at Jesus’ feet and heard His word. But Martha was distracted with much serving, and she approached Him and said, “Lord, do you not care that my sister has left me to serve alone? Therefore tell her to help me.” And Jesus answered and said to her, “Martha, Martha, you are worried about many things. But one thing is needed, and Mary has chosen that good part, which will not be taken away from her.”

The words of Christ Himself speak against the objections to the monastic life. For what is the monastic life other than the life of constant adoration, contemplation and prayer towards God? And what fault can be found in such a life? It is the prayers of the monks that causes the world to continue to turn; it is their humility which makes up for the lack of our own. As St. Silouan says, “Prayer keeps the world alive and when prayer fails, the world will perish.”