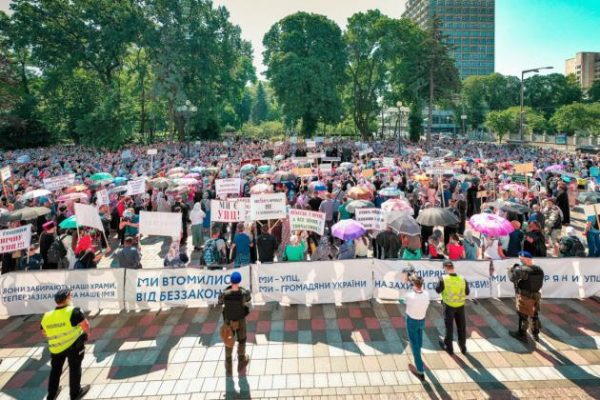 On June 15, over 20 thousand believers and clergy from various dioceses of the Ukrainian Orthodox Church took part in a prayer vigil at Ukraine’s Supreme Rada and Presidential Office to attest to their belonging to the canonical Church and to call upon the state leadership to defend their Church  from the anti-constitutional laws and discrimination.

The faithful handed over to Parliament members and to the President an appeal with two draft  bills, which provide for a repeal of the anti-church laws No. 2662-VIII popularly called “a law on the forceful renaming of the Church” , and 2673-VIII, which actually legalizes the capture of churches of the canonical Church by raiding. 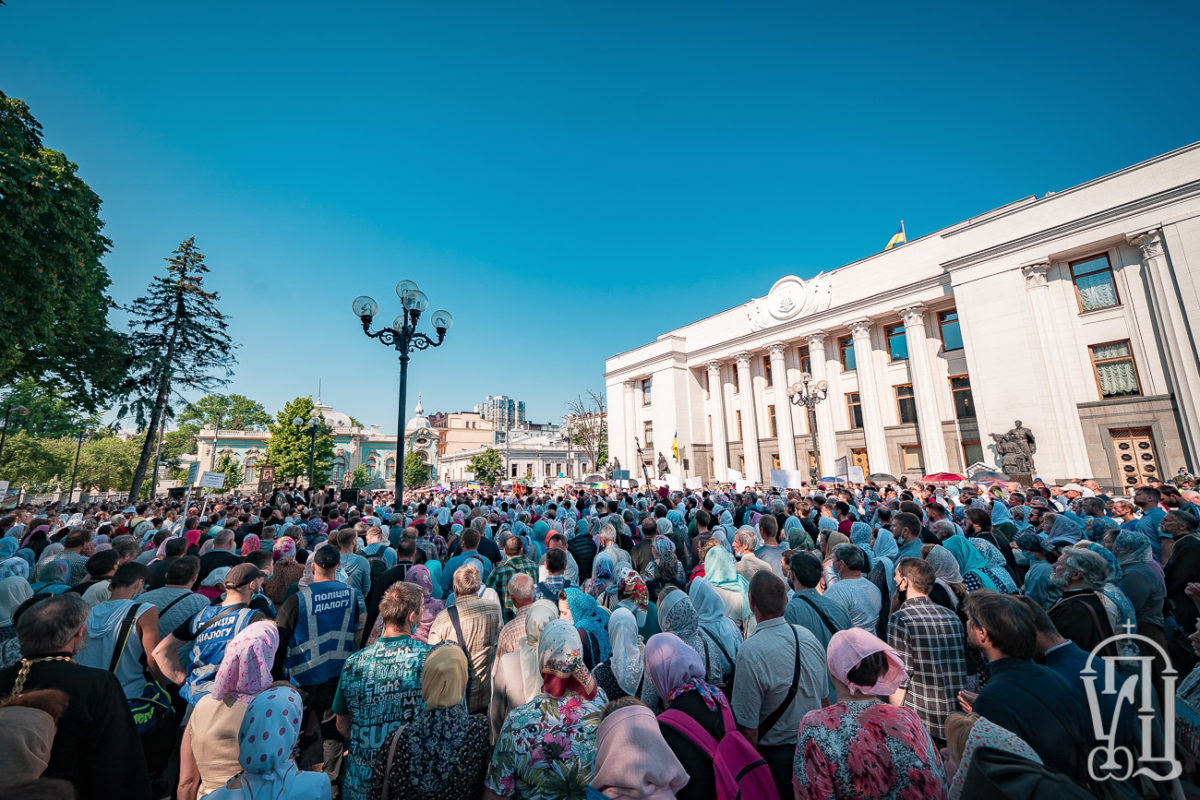 “We have come here having left our household chores and many have left their work in order to be ultimately heard , to draw attention to the fact that in the 21st century, in the center of Europe, persecutions continue to be carried out on religious grounds”, Archbishop Nikolay of Vasilkov said.

“Christ is risen from the dead, trampling down death by death and on those in the tombs bestowing life”, the faithful prayed by the words of the Easter troparion. The participants said that they came out against the anti-church laws since “they run contrary to Article 35 of the Ukrainian Constitution, violate the freedom of faith, discriminate against the Ukrainian citizens who belong to the Ukrainian Orthodox Church, violate the civic peace and do harm to the international image of the country”.

After handing over the appeal to people’s deputies, the participants in the thousands-strong peaceful action proceeded with prayer to the Presidential Office. The millions of signatures brought by the faithful who demanded to stop the oppression against the Ukrainian Orthodox Church and to repeal the anti-church laws were accepted by a representative of the President who said he woud hand the appeal over to the secretariat.

“Dear Vladimir Aleksandrovich, coming to you are the faithful of the Ukrainian Orthodox Church, coining to you are people who voted so that you might become the President of Ukraine. We pinned our  great hopes on you. Above all, we wanted peace in Ukraine, we wanted the violence against the UOC to be stopped, hoped that the raiding captures of churches would be a thing of the past. We hoped that our communities throughout Ukraine would live and pray in peace and tranquility. Our hopes have partly come true, but the violence against religious communities of the Ukrainian Orthodox Church still continue. We ask you as your electoral base and citizens of Ukraine to repeal the laws which commit violence against the UOC and run contrary to the Ukrainian Constitution. We ask that the Constitution be observed. We ask to repeal the invitation to Patriarch Bartholomew – he is not the head of our Church, nor even an official representative of the state from which he comes, he has failed to bring peace and unity in the Ukrainian Orthodox society For the sake of peace in Ukraine, for the sake of religious peace, we ask this of you! We are praying for our Ukrainian State, for our Church and give our lives for peace in Ukraine. We hope that you will hear us”, these words addressed to the head of state were voiced by Archbishop Nikolay of Vasilkov when the appeal of the faithful was handed over to the representative of the Presidential Office.

According to one of the initiators of the peaceful action, for the faithful of the canonical Church it was a really historic event that will stay for ever in the memory of the laity and clergy of the Ukrainian Orthodox Church. “They change our name, change the law so that pressure could be made on us, but we will be heard when we are not silent! Christ is Risen!”, he summarized and thanked the brothers and sisters for their prayers.

As Archbishop Nikolay reported, the appeal of the faithful was accepted and registered. So, it remains to hope that the Ukrainian authorities will hearken to the voice of the faithful of the Ukrainian Orthodox Church. In conclusion, he thanked the faithful, especially those who had to go hundreds of kilometers to come together for a common prayer and called upon the authorities to defend the canonical Church from discrimination.