Overcoming Egoism: On the Sunday of the Paralytic Man

That is the gospel record, and having heard it, many will respond that it's just another miracle, another unbelievable event that has nothing whatsoever in common with our life, interests, needs, questions ... But we listen carefully and reflect: the gospel is so childishly simple, and its stories so short, that a person of today is easily fooled by this brevity and simplicity
Protopresbyter Alexander Schmemann | 05 May 2012

On the third Sunday after Easter, the reading from the gospel of John recounts Christ’s healing of a paralytic. “There was a feast,” writes the Evangelist John, and Jesus went up to Jerusalem. Now there is in Jerusalem by the Sheep Gate a pool, in Hebrew called Bethsaida, which has five porticoes. In these lay a multitude of invalids, blind, lame, paralyzed waiting for the moving of the water; for an angel of the Lord went down at certain seasons into the pool, and troubled the water: whoever stepped in first after the troubling of the water was healed of whatever disease he had. One man was there, who had been ill for thirty-eight years. When Jesus saw him and knew that he had been lying there a long time, he said to him, “Do you want to be healed?” The sick man answered him, “Sir, I have no man to put me into the pool when the water is troubled, and while I am going another steps down before me.” Jesus said to him, “Rise, take up your pallet, and walk.” And at once the man was healed, and he took up his pallet and walked. (Jn 5:1-9)

That is the gospel record, and having heard it, many will respond that it’s just another miracle, another unbelievable event that has nothing whatsoever in common with our life, interests, needs, questions … But we listen carefully and reflect: the gospel is so childishly simple, and its stories so short, that a person of today is easily fooled by this brevity and simplicity. It seems to him or her that the truth about themselves and about their life must be complicated and cumbersome, because they themselves are complicated. But perhaps the gospel’s ageless power resides in its reduction of everything to the most essential, elementary, fundamental: good and evil, darkness and light, man and God, life and death. And indeed, any focused and deep thought that involves not merely the mind, but one’s entire being, in the end always concerns what is most essential. For all of life’s complexity balances on the simplicity of eternal questions: good and evil, life and death, God and man. 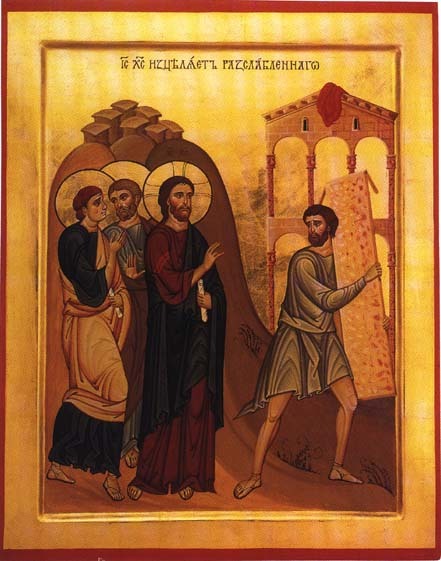 So, in this particular gospel story, what is eternal and enduring? At its center, very clearly, are the paralytic’s words to Christ, “I have no man.” This truly is the cry of someone who has come to know the terrible power of human selfishness, narcissism. Every man for himself. Looking out for number one. All of them, all that great multitude of blind, sick, paralyzed, are all “waiting for the troubling of the waters,” in other words, waiting for help, concern, healing, comfort. But…each waits by himself, for himself. And when the waters are troubled, each throws himself forward and forgets about the others… From the gospel’s point of view, this pool is of course an image of the world, an image of human society, a symbol of the very organization of human consciousness.

Oh, of course, within the world one can find many examples of people who overcome egoism, examples of goodness and self-sacrifice. But even when someone has apparently overcome personal selfishness, he is still held prisoner by the category “his.” He may have overcome bondage to himself as an individual, but then it is “his” family, and for “his” family, since “charity begins at home.” If not family, then “his” ethnic group or country. If not this, then “his” social class, “his” political party. His, always his! And this “his” is invariably opposed to someone else’s, which by definition becomes alien and hostile. We’re told that this is how the world works, what can you do? But is this really true, is this really the ultimate, objective, and scientific truth about the person and human life?

Is it really true that everything in this world boils down to personal or collective self-interest, and that everyone lives by this? We are told that capitalism is wrong because it is self-serving and must, therefore, be destroyed in the name of communism. But self-serving is exactly what communism has been, constantly trumpeting its own worldview, its own class, its own party and so forth: its own against not-its-own, the other. .. And there is no escape whatsoever from this vicious cycle.

Unknown to us, however, we no longer feel suffocated by this world so totally drunk on all-consuming ego. We have become accustomed to blood, hatred, violence and, at best, indifference. Sometime in the 1920’s, a young man, practically a boy, left a note and then committed suicide: “I do not want to live in a world where everyone is playing a con game … ” All of this was suffocating him, he could not stand it any longer. But we are gradually harassed into accepting this as normal, and the horror of self-centeredness we cease experiencing as horrible … This is what the gospel story of the paralytic is about. All these sick, helpless, paralyzed people are sick first and foremost with incurable narcissism. This is what brings a person to cry: “I have no man!” There is no one! And this means that a person comes into being when narcissism is overcome; it means that human beings, above all, are a face turned toward the other person, eyes looking intently with concern and love into the eyes of the other person. It is love, co-suffering and care. The gospel also tells us that this new and authentic human being has been revealed to us, has come to us in Christ. In him, the One who comes to the lonely and long-suffering paralytic is no stranger, but “his own”; He comes in order to take up the sick man’s sufferings as his own, his life as his own, to help and to heal.

“Do you want to be healed?” This is not the question of someone intent on forcing, convincing or subduing others. It is the question of genuine love, and therefore, genuine concern. Religion, alas, can also become narcissism, exclusively busy with itself and its own. But it is important to understand that this kind of religion, in spite of whatever Christian cloak it might be wearing, is in reality not Christianity … For the whole of Christianity consists of breaking through the terrible walls of self-centeredness, breaking through to that love which, in the words of St Paul, God has “poured into our hearts” (Rom 5:5). That is Christianity’s new, eternal commandment, and the content of the entire gospel and all our faith …

Sermon on the  Sunday of the Paralytic by Archimandrite Tikhon (Shevkunov)

Do you want to be made well? by Fr. Sergei Sveshnikov