Particle of Holy Relics of St. John the Baptist Discovered in Florence 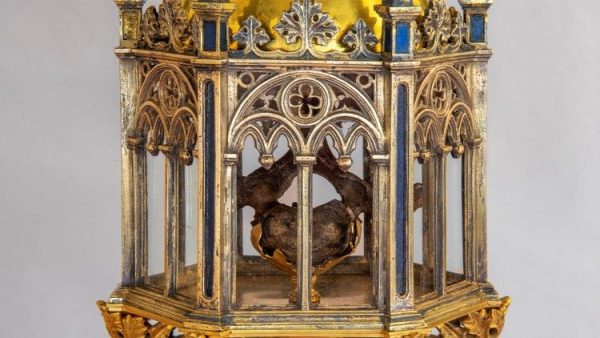 A particle of the holy relics of St. John the Forerunner, the Baptist of the Lord, was discovered in the cathedral of Florence, Italy.

The particle – the cervical vertebra – was discovered along with 11 other fragments of the bones of saints in the cathedral reliquary of St. Simeon the Stylite by local Deacon Alessandro Bicchi, reports Vatican News.

Father Alessandro, who is also a deputy director of the diocesan department for sacred art and church property, has been studying the relics of the Florentine cathedral for several years, including those that arrived from the Christian East.

As a result of the study, it was established that the newly acquired particle of the relics belonged to the Byzantine emperor John VI Cantacuzin, who was tonsured a monk in 1357. In subsequent eras, the shrine was visited by the noble Florentine family of Torreggiani, then kept in the hospital of Santa Maria della Scala in Siena and – until the beginning of the 18th century – in the Florentine Baptistery.

As soon as the particle of the relics was found again, it was carefully examined, confirming its authenticity. The conclusion about the authenticity of the relic was made, in particular, on the basis of Greek initials written directly on the bone and a miniature inscription, also in Greek, found on a gilded silver frame. The inscription indicates that this is the relic of St. John the Baptist.

“The veneration of holy relics of saints or their particles reminds us that even in their bodily fragility, they in an outstanding way testified to the strength and love that comes from belonging to Christ. The relic gives the faithful the opportunity to get in touch with the venerated saint, whom we pray to, making the mysterious power of the sacred tangible,” Deacon Alessandro Bicchi commented on the event.

It is planned that on June 24, the particle of the relics will be exhibited for the first time for worship of believers in the Cathedral of Florence. Here it will remain, being placed in an ancient reliquary of the 19th century, donated by a benefactor.