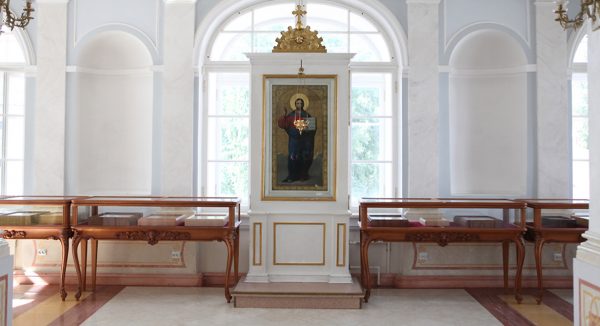 A reliquary containing holy relics of fifteen saints of the Orthodox Church from different eras was opened at St. Alexander Nevsky Lavra in St. Petersburg.

“According to an ancient tradition, many monasteries have reliquaries. In association with the celebration of the 800th anniversary of the birth of the Holy Blessed Grand Duke Alexander Nevsky this year, the reliquary of our monastery was opened at St. Theodore Church of the Holy Trinity – St. Alexander Nevsky Lavra,” a message on the Lavra’s website says.

The holy relics of the 15 saints are inserted into their icons. Everyone can venerate them and pray before the saints’ icons.

Today, the relics of the following saints are kept in the reliquary of St. Alexander Nevsky Lavra:

The Holy Martyr Maria of Gatchina;

The Venerable Seraphim of Sarov;

The Venerable Maxim the Greek;

The Hieromartyr Blaise, Bishop of Sebaste;

The Venerable John of Valaam.

It is noted that these icons and the holy relics are already known to the parishioners of the Lavra and are placed in their usual places in free access for prayer in front of them – at the Holy Trinity Cathedral and other churches of the lavra.

The Reliquary of the Lavra will be replenished with new icons in the future. Meanwhile, the monastery will gratefully accept help in creating a reliquary and painting icons for it.

Most viewed articles
How Can We Evangelize Today?174
A Stone Thrown at God and Your Neighbor122
Five Signs of a Modern Pharisee107
Trial of Politician Defending Traditional Marriage Begins in Finland94
Hierarchs of Three Local Orthodox Churches Concelebrate in Argentina90
Metropolitan Onuphry: “The Key to the Doors of Paradise is Repentance”68
Patriarch Daniel prays for Romania’s national unity, peaceful coexistence and dignified cooperation with other peoples44
Grains of Wisdom and Piety Book Published30
Medical Workers Walk 1.5 Km Through Snowdrifts and Save the Life of a 100-Year-Old Woman24
Most popular authors
Pravmir.com team306
Frederica Matthewes-Green174
Protopresbyter Themistoklis Mourtzanos122
Archimandrite Markell (Pavuk)107
Aurelian Iftimiu44