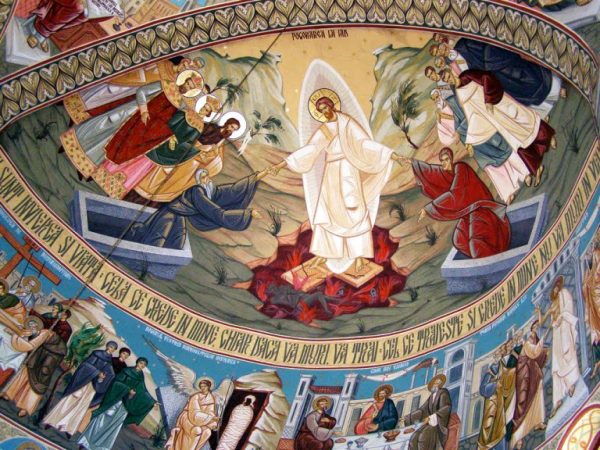 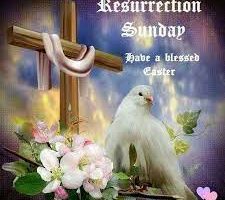 I am reliably told that in some parts of the Protestant world the feast we Orthodox are now celebrating is called “Resurrection Sunday”.  Though it used to be universally known there as “Easter”, apparently some people in the Evangelical Protestant world are reluctant to use the term “Easter” because they believe the word has pagan connotations and a pagan past.

The actual history of the word is somewhat obscure.  The Venerable Bede, an eighth century English church writer, gave his opinion that the word had been the name of an Anglo-Saxon deity, but no historical paperwork survives to corroborate this.  There is Germanic word related to sunrise and spring, and the dawn of springtime was called “Eostremonath”, “Easter month”.   Anyway, if there ever was an Anglo-Saxon goddess by the name of Eostre or Ostara or something like it, that deity is long gone—far too long gone to cast much of a shadow over the Christian celebrations of today.

In many places of the world, the feast of Christ’s death and resurrection is known as Pascha.  Thus the French called the feast “Paques”,  the Spanish call it “Pascua”, the Romanians call it “Paşti” and the Italians call it “Pasqua”—all related to the Greek/ Latin “Pascha”.

Tempting as it is to relate the Greek word “Pascha” to the Greek word meaning “to suffer” (πάσχω/ pascho), it is actually the transliteration of the Hebrew word pesach, meaning “to pass over”, to skip”.  The word is found in Exodus 12:13, which says that when God sees the blood of a slaughtered lamb obediently daubed on the lintels of the homes of the Hebrews, He will pass over those houses so that the destroyer sent to destroy the firstborn in the homes of the Egyptians will not destroy them.  The feast commemorating this deliverance was accordingly called “Pesach”, “Passover”.  In Matthew 26:2, the name of this Hebrew feast is transliterated as πάσχα/ pascha, which word found its way into other languages similarly transliterated.  English-speaking Orthodox therefore refer to the feast of our Lord’s death and resurrection as “Pascha”.

But what’s in a name, after all?  Does it matter whether or not Christians call this annual celebration by other names, such as “Easter” or “Resurrection Sunday”?  Is anything lost by the use of other names?

Actually, yes, although admittedly the loss is not earth-shattering.  The use of the term “Pascha” grounds the Christian feast in the Hebrew feast, and further serves to ground Christianity in Judaism—and maybe even further back.  The calendar we now use has a long history and even a pre-history.

All ancient calendars were originally agricultural.  That is, people needed to know when to sow and reap their crops—when barley should be planted, when it was ready for harvesting, and when the baby lambs would be born.  The Hebrews were no different.  When they lived in Egypt and even before, like everyone else their calendar was rooted in the agricultural cycle of annual death and rebirth, the revolving returns of life in the soil and on the land.

Thus, for example, the springtime was the time when lambs would be born—and when lambs could be slaughtered and the people feast on roasted lamb.  The autumn was the time when crops were gathered in and the people rejoiced in the harvest.  Religion for the pagan peoples was all about nature, and their gods were expressions of the powers of nature—gods of fertility, gods of the rain, etc.

But the God of Israel was different.  He was not a projection or expression of the powers of nature, but nature’s creator, and as such was radically transcendent, reigning far above nature and the natural world.  And He was not just the God who gave the rains and presided over the annual cycle of death in the winter and rebirth in the spring.  He was also the Lord of history, and directed the affairs of nations.  For the pagans, history was mostly the endless annual cycle of the death and rebirth of nature, though of course kings fought over turf, conquered, and died.   Those kings would come and go, but the world went on, and spring always returned.  For pagans, history was essentially cyclic.  It was not really going anywhere.

But for those who worshipped Yahweh, the God of Israel, history was going somewhere, directed by Israel’s Lord.  That is why Yahweh took the primordial agricultural calendar used by Israel and by everyone else and gave it an added significance.   In Yahweh’s calendar, the springtime was now not only about the annual birth of lambs.  Annual springtime now also commemorated Yahweh’s mighty historical act when He saved Israel in Egypt through the sacrifice of the lambs at Pesach.  An historical element had been added to the original agricultural one.

Just as the Jewish calendar built upon the foundation of an earlier pagan one, so the Christian calendar built upon the foundation of the earlier Jewish one, with yet another Christological layer of meaning being added.  Now the feast of Shavuot/ Pentecost not only commemorated the giving of the Law, but the giving of the Holy Spirit, when the Law was written within the hearts of God’s people.  Now the feast of Pesach/ Pascha commemorated not only the sacrifice of the lambs in Egypt, but the sacrifice of Jesus on the cross as the Lamb of God and His rising from the dead.

This final layer of meaning was not an arbitrary addition, but the eschatological trajectory and fulfillment of the original prior meaning.  The slaughter of the lambs in Egypt at Pesach saved Israel from death and laid the foundation for their liberation from slavery and their eventual arrival in the Promised Land.  This always was prophetic, pointing toward the death of Christ at Pascha by which we are liberated from the slavery of sin and death and begin our long journey to the heavenly Promised Land.  The Christian feast thus brings out the prophetic meaning of the Jewish feast.

This is why it is important to preserve as much as possible the original Jewish terms for our feast of Christ’s death and resurrection, even if the Jewish terms are those found in the Jewish Greek translation so that we call it “Pascha” and not “Pesach”.  The traditional name of Pascha for the feast of Easter or Resurrection Sunday offers a door through which we can access theological treasures.