Why Do We Call It Pascha? 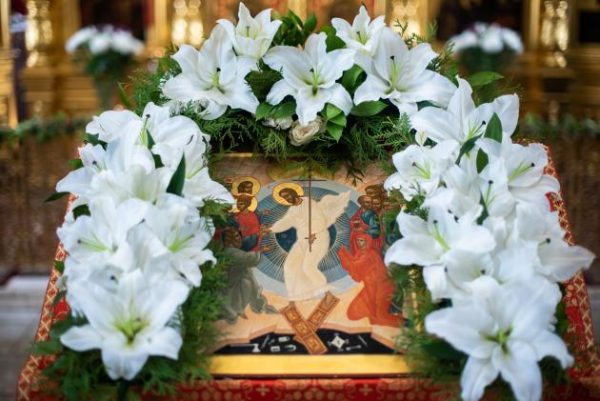 Christ is risen! Indeed He is Risen!

My beloved, we are now in the joyous season of Pascha. It occurred to me that perhaps some of you do not know why we call what is known in the west as Easter by this term Pascha. What does it mean? Where did it come from? How can we celebrate it properly during these holy days that culminate in the feasts of Ascension and Pentecost?

Pascha, is a word that is Greek but originally derived from Hebrew and that word meant “passover”. We know that passover is a feast celebrated by the Jewish people. This feast celebrates the miraculous events that led to the release of the Jews from slavery in Egypt. We read about this in the biblical account called Exodus, which is the second book of the Bible. The actual event that is called the passover is the event that broke Egypt’s back and made Pharaoh submit to the demands of Moses the prophet and release the people of God. What was this event? It was the coming of the angel to kill and wipeout the first-born of every living creature, both man and beast. Both Jews and Egyptians.

But God had a plan for those who loved Him and had faith. He instituted the passover celebration where the people would gather around a table and eat a lamb cooked with bitter herbs. When this lamb was slaughtered, God instructed that it’s blood was to be put across the door posts of each house. The blood would form a shape that you would see across the top rail of the door and across the two side posts on the left and the right. It would look very much like the Greek letter Pi. However in the modern Hebrew language the shape of the letter would be recognized as Tav which makes the sound “t”. So, if a modern Jew were to look at the mark of the blood on the doors they would immediately think of the letter Tav. Why is this so interesting? Because during the time of the exodus and in the early Jewish history, the letter underwent development and changes. Tav didn’t always look like the Greek letter for Pi, but looked like something much more recognizable to each of us. It looked almost exactly like a cross or a lower case “t”.

What does this have to do with Pascha? Pascha takes it’s name from this feast of the Jews, where they took the blood of a spotless lamb and put it on the doors of the house in obedience to the Lord. This was the sign by which the Angel would pass over the house and would not kill anyone within the house. In this way, it was understood as a passover and that is exactly what we celebrate during this beautiful season of Pascha. Only we have much more to celebrate then did the Jews in Egypt.

The Jews were in bondage and slavery in Egypt, but we were in the bondage and slavery of sin. The Jews worked for Pharaoh and the empire of Egypt, but we worked for Satan and his kingdom. The jews picked a lamb without blemish and killed it in order to eat it and to place it’s blood on the door posts. God chose His only Son to be the lamb of God, who takes away the sins of the world. And He did this upon the wood of the cross, in the shape of a “t”. They ate of this lamb with bitter spices, yet in Holy communion, we eat the lamb of God with joy for what He has done for us and in us.

They spread the blood upon the door so that the angel might pass over the house and everyone in it. Yet we were baptized into the death of Christ so that by the death that He died, He could offer us freedom from spiritual death and life immortal. Through the death of the Lord we are offered fullness of life. It is to live life in communion with the Holy Trinity, forever. Nothing in the world can separate us from God because of the blood of the Lamb of God. This sacrifice has made death powerless over us. Even more that that, it has rejuvenated us and energized us with new life, the divine life of Christ through the Holy Spirit.

Pascha is a fulfillment of the feast of passover celebrated long ago. It is our passover celebration. It was celebrated with great symbolism in the past, but we celebrate it through fulfillment and in reality. Because of God’s mercy and love, we now have the ability to live freely in Christ, in true life, and to grow in depth and knowledge of the Lord and to serve Him faithfully.

We see this glorious time in the Church as a foretaste and an entrance into the kingdom. Everything shines with the light of Christ. Everything takes on the joy of the resurrection. Everything becomes new again. We fasted for many weeks in order to be prepared and to be purified for this time in the presence of the renewed grace of God. We don’t celebrate Pascha for merely a day. Not even for 40 days. Pascha is the eternal celebration of life in Christ.

Around the year 1815, we hear that St. Seraphim of Sarov had repented and prayed for nearly 1000 days while upon a rock, he descended from that rock and began to greet all of the people with a familiar phrase that God had given to Him… “Christ is risen!” This is not just a hope. Christ is risen! This is my belief, this is my faith, this is my creed, this is my life. Christ is risen from the dead. And we who were in the tombs of spiritual and physical death are now given life. May this life not be wasted. May this life be lived as the saints themselves have lived it. Life is not about them or about the world. Everything is an offering to the living God.

St. John Maximovitch of San Francisco said “the Son of God came to earth and became man that He might lead man into heaven and make him once again a citizen of Paradise, returning to him his original state of sinlessness and wholeness and uniting him unto Himself.” If this is our way, He will be our joy. Because He lives, we shall also live with Him. This is the precious gift that has been given to us. Christ is Risen! Indeed He is risen!