It IS Pascha not Easter!

Orthodox believers living in the West have always been under pressure in all directions to conform to western ways, ideas and practices. There is nothing new in this. The Crusades were the worst and most blatant attempt by the West to bring the East to heel. But the pressures continue, albeit in more subtle ways. And one example of this is our constant temptation to drop the word "Pascha" and for clarity (and sometimes charity) use the western word "Easter".
Archpriest Michael Harper | 21 April 2009

I hear occasionally from someone who sometimes accuses the Orthodox Church of being “foreign”, and so unsuitable for the British. A few days ago he sent me a card saying “the word in English is Easter”. My reply was “the word in Greek (and, therefore, English), is Pascha”.

This is a much more important subject than a mere dispute about words. If the word in English is Easter, then one is bound to ask “what word?” Was there some word which, when translated into English, became “Easter”? The plain answer is “no”. There is one simple reason for this, Jesus Christ in the days of his flesh never visited these shores, and his words were not written in English. He spoke Aramaic, and his sayings were recorded in Greek, as were the words of the other NT writers like Paul and Peter. An example of the desire to replace the word “Pascha” with “Easter” is the King James version translation of Acts 12:4 which describes the arrest of Peter by Herod and his intention “after Easter to bring him forth to the people”. The Greek word here is pascha, and all modern translations rightly now translate the word “passover”

We need to realise also that there is no equivalent word for “Easter” in the Greek language, for one simple but important reason, the word is an Anglo-Saxon word for a pagan festival. The word in its original use is entirely pagan. According to the English Church historian Bede, it derives from a pagan spring festival in honour of Eastra or Ostara a Teutonic goddess. It has no associations whatsoever with Christ, His death and Resurrection, or indeed anything Christian. Is it not, therefore, unsuitable to be used to describe the greatest day in the life of the Church? The French, Italians and Spanish do not make the same mistake. Their words come from the proper source – Passover, which in Greek is the word “Pascha”. 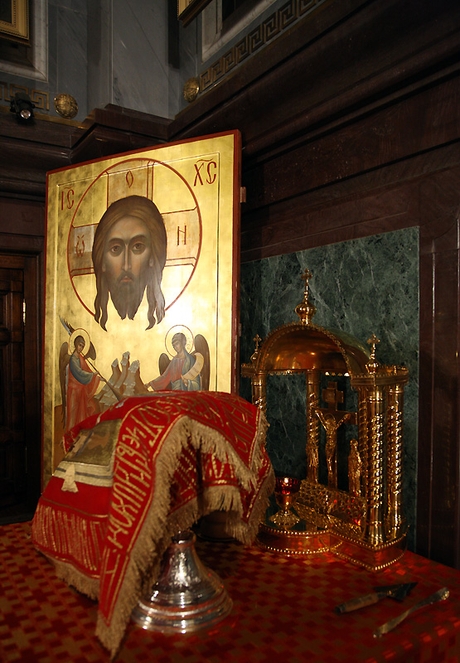 Pascha is derived from the Jewish word Pesah which means “Passover”. And here there is a direct link with the New Testament. In 1 Corinthians 5:7 we read, “for our paschal lamb, Christ, has been sacrificed”. According to St John, Christ was crucified at the very time that the paschal lambs were being killed. There is another link with the Old Testament because of the importance to the Jews of the Feast of the Passover. The verbal form means to protect and to have compassion as well as “passover”. The experience of the Israelites was literally a “passover”, but it was also an experience of both God‟s compassion for his people, and a great act of protection, as for example, the passage through the Red Sea. The crucifixion and later Resurrection of Christ took place during the Passover Feast. So for Christians Christ was clearly the Paschal Lamb, the fulfilment of all that the Passover had foreshadowed since the first Passover which celebrated the liberation of the Israelites from slavery in Egypt. Let us remember that because the word “Pascha” is in its origin a Hebrew word, by using it we are a witness to the Jewish community, for whom the Passover is still one of the most important words in their religious faith.

Orthodox believers living in the West have always been under pressure in all directions to conform to western ways, ideas and practices. There is nothing new in this. The Crusades were the worst and most blatant attempt by the West to bring the East to heel. But the pressures continue, albeit in more subtle ways. And one example of this is our constant temptation to drop the word “Pascha” and for clarity (and sometimes charity) use the western word “Easter”. But perhaps the time has come for us to make a stand against this. In our increasingly secular and pagan society the use of a pagan word, of which no one knows the meaning, is hardly suitable to describe the greatest day in the Christian year. When most people knew the Christian meaning of the word “Easter” one could perhaps make out a case for using the word. But not today!

There are still some for whom the word “Easter” has all the right resonances. Let us not want for a moment to deprive them of that blessing. Easter for them does not mean hats, chocolate eggs, parades or watching football; it means the Cross of Christ and his glorious Resurrection.

But let the Orthodox stick to the right word, which is “Pascha”. Let us use it in our own circles, and discard the pagan word “Easter”. We should do this – not to be different, but to be truthful.

We should encourage the West to unite with us in using the right word, which is Pascha.

And finally, let us not get dragged down with a dispute about mere words. St Paul warned believers in his day “to avoid wrangling about words, which does no good but only ruins those who are listening” (2 Timothy 2:14). The important matter here is not what the Festival is called, but the reality of the Death and Resurrection of Christ. Yes, Christ is Risen! If we can agree there, then what we call it, important though that is, can be seen in its proper perspective.