to the Archpastors, Pastors, Deacons, Monastics

and all the Faithful Children of the 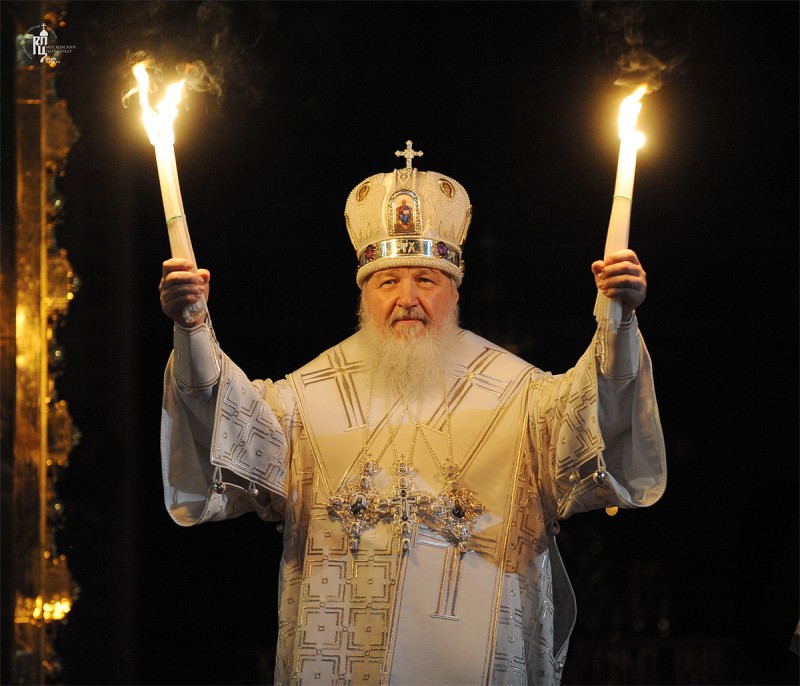 Thanks be to God, which giveth us the victory through our Lord Jesus Christ (1 Cor 1:57)

Beloved in the Lord Your Graces the archpastors, all-honourable presbyters and deacons,

On this great and radiant day I congratulate you from the depths of my heart on the Lord’s Passover and greet each of you with these ancient and holy words:

It is in these words, with which people throughout the ages have greeted each other during the bright days of Pascha and by which they have testified to the world of the truth of an event occurring two thousand years ago, that there is to be found a great inner power. They contain the tidings of victory and a call to joy, the desire for peace, and the hope and comfort of every human person.

He who was born of the Most Pure Virgin Mary, he who suffered greatly and without blame, he who was crucified and died on a cross between two thieves, he was the first among people to rise from the dead. ‘He has been raised, as he said he would be’ (Mt 28:6). The tomb is empty. There remain in it only the swaddling clothes in which his body was wrapped. The myrrh-bearing women came to the place of the Lord’s burial ‘very early in the morning … at the rising of the sun’ (Mk 16:2) and did not find Jesus there, for neither the stone that blocked the entrance into the cave, nor the guard who kept watch by it, nor even death itself could withstand the great power of the Living God. ‘Hell hath enlarged herself, and opened her mouth without measure’ (Is 5:14), exultant Hades had been ready to engulf its most powerful enemy, yet instead froze in fear, for it had been illumined by the light of the Godhead. Christ has vanquished corruption and destroyed death.

Through the first man, who disobeyed the Maker and fell away from the Fount of eternal life, evil came into the world and sin reigned over people. Christ ‘the last Adam’ (1 Cor 15:45) has vanquished death of the spirit, death of the soul and death of the body. ‘For as in Adam all die, even so in Christ shall all be made alive,’ St. Paul tells us (1 Cor 15:22). All that we have lost in the first Adam we have acquired anew in Christ. The Lord’s Passover is truly the ‘great gift of the divine economy’ (St. Theodore the Studite).

Having overcome the human person’s alienation from his Maker, the Saviour has granted to us the possibility of being united with him. As St. John Damascene says, through the Cross of Christ we have been ‘granted resurrection … The gates of paradise have been opened to us, our nature now sits at the right hand of God and we have become the children of God and his heirs’ (An Exact Exposition of the Orthodox Faith, Book 4). We are all called upon to be worthy of this gift.

The Son of God, in assuming our nature, has become like us in all things apart from sin. Through his earthly life and sufferings on the Cross he has shown us an example of the greatest humility and obedience to the heavenly Father, an example of struggle against temptations and allurements, and through his resurrection he has destroyed the fetters of sin and granted to us the power and means to vanquish evil. It is in this struggle that one grows spiritually and becomes a morally free person.

We live at a time when freedom is often taken to mean moral chaos. Many sincerely believe that only power and riches, health and physical strength, bring liberation and in competing in service to the idols of this world they often fail in that which is most important, in the attainment of the true goal of life. The Saviour, who has risen from the tomb and granted to us freedom, has revealed to us this goal of knowing the Truth (see: Jn 8:32) and of life with God.

In destroying bodily death, Christ has promised eternal life, but not as an infinite continuation of the earthly path but as the transformation of the all human nature when the body will acquire new properties. It is in the Lord’s resurrection that the foreshadowing of our future resurrection is mysteriously revealed. In the coming kingdom of heaven, where there will be neither death, nor illness, nor parting, and not even time, ‘God shall wipe away all tears from their eyes’ (Rev 21:4), and joy will be never-ending and love eternal. The Lord’s victory over death gives us steadfast hope that in following him at his second and glorious coming we will rise again to a new life – life in unceasing communion with God.

Let us then share the joy in our risen Saviour with all those who are in need of attention and care: with the sick, the elderly, those who suffer or who are despondent, those who languish in places of confinement, and those people who are without means or a roof over their heads. And, in becoming like the witnesses to the resurrection – the holy apostles – let us with faith and boldness proclaim to those near and far the good news that Christ has truly risen! Amen.