Source: Independent Catholic News
Natalya Mihailova | 15 April 2015
In a powerful Easter Message from Damascus, the three Syrian Patriarchs: Patriarch Gregorios III, Patriarch Ignatius Aphrem II and Patriarch John X call for an end to the violence in the Middle East, especially Syria, Egypt, Iraq and Palestine. They appeal for greater support for Christians struggling to survive in the birthplace of Christianity and urge world governments and international organisations to assist in the search for kidnapped church leaders. 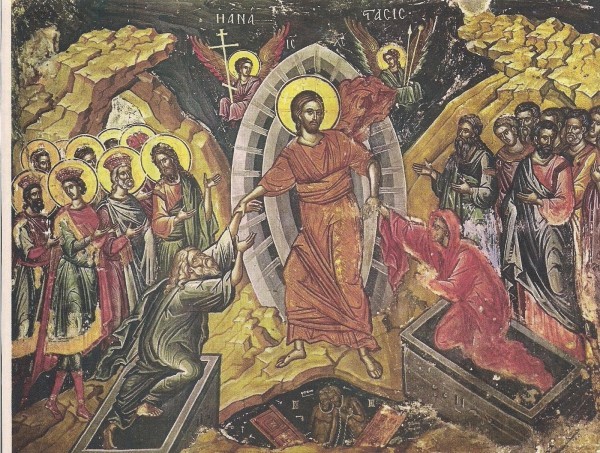 For the Greek Orthodox For the Melkite Greek Catholics

Paschal Message Christ is risen! He is risen indeed.

This sacred phrase brings to you the most beautiful good news of resurrection from the dead, dear spiritual sons and daughters, who by the power of your hope in the Lord strengthen us and renew our spiritual force.

We greet you in the Lord who is risen and has raised his creatures.

We greet you with the bells of our churches that have not stopped pealing their proclamation of the Lord’s resurrection.

This year, we have chosen to have one message read in all churches of Antioch to confirm that the Christians of this land are remaining united, despite the severity of the crisis, and intense pressure will not silence their hope or stifle their presence in their ancestral land. And addressing you in these words, we invite you all to pray at the Feast of the Resurrection for world peace and security, especially in our beloved East, and we assure you that we are with you in your suffering and your pain, and are doing our utmost in order to alleviate this suffering.

This East is the core of our identity, and the preservation of the leaven of Christianity in our diverse social fabric and among our multicultural residents who all share a common humanity is today the touchstone of the world’s credibility towards this region of the earth and towards its people.

The region’s security and peace constitutes a test of conscience in the face of the discourse of interests.

Enough of killing and displacement and enough of our suffering!

Enough of intimidation and organized terrorism against the people of this East!

Enough of the rape of Palestine and overlooking its just cause!

Enough of the bloody wounds inflicted on Syria over the last five years and of the importation of extremist ideologies!

Enough of the destruction of abandoned and violated Iraq, with its variously affiliated minorities, now the focus of a dubious international policy.

Pascha today provides an opportunity to reflect on what has been and is still happening and to speak out in the face of falsehood and tell the truth without fear.

We do not now see a much-vaunted Arab Spring, because in Spring all flowers bloom without this turning into a bloody struggle that crushes some flowers.

As Eastern Christians we have concurred with every voice of moderation in this East and sought to live in longed-for peace with every nation, but terrorism is blind and harnesses religion and concocts slogans as an affront to the sovereignty of States and to accumulate power over oppressed Muslim fellow-citizens too. This is demonstrated in the high price paid by the innumerable families killed, uprooted, and kidnapped all over the Middle East.

And we ask today in front of the whole world: Where is Mar Gregorios Yohanna Ibrahim, Archbishop of Aleppo and Metropolitan Paul Yazigi of Aleppo who have been missing now for nearly two years?

Where do the world governments and international organizations keep their files on each one of those kidnapped?

Hence we are launching a strong appeal for their release and the release of all abductees and promoting efforts to emphasize our commitment to our country, and our rejection of emigration – despite our understanding of its causes in some cases; but we urge everyone to stay, to be patient and strong and hang on to hope, faith and surrender to the will of Almighty God, and to reject all displacement and terrorism and work hand in hand for the sake of peace in the region, and to put an end to global polarisation and the exploitation of Middle Eastern human beings.

We, the people of the Middle East, are invited to persevere with hope and maintain effectively our Christian presence and role, because we are at the heart of its history and issues. We are not present here as temporary visitors and guests or as the remnants of past campaigns. We are sprung from the antiquity of its history and have drawn from its Tigris, Euphrates and Orontes our enduring love for this region: at Antioch we were first called Christians.

We are crucified on the cross of its love, and have buried our troubles in the depths of its history. We, with our Muslim brothers and all who trust in God, have crossed the waters of its peace and walked on the road to Golgotha. We yearn for the crown of spiritual victory and aspire to strengthen our resolve and place our hope firmly in the Lord, the Creator who planted us here as brothers, and we, as spiritual leaders, are keen to play our part for our children and the future of our country.

In this hope of the Resurrection, we address to you from Damascus this heartfelt greeting on the Feast of Pascha, the feast of passing from death to life, from slavery to freedom, and humiliation to dignity, and war to peace, making supplication for peace in every part of the Middle East and for the peace of the whole of creation and we sing: “Christ is risen from the dead, trampling down death by death and to those in the tombs he has given life.”