Source: Orthodox America
Children and suffering. How can one make any sense of it? How can one bear it?
Natalya Mihailova | 12 March 2015 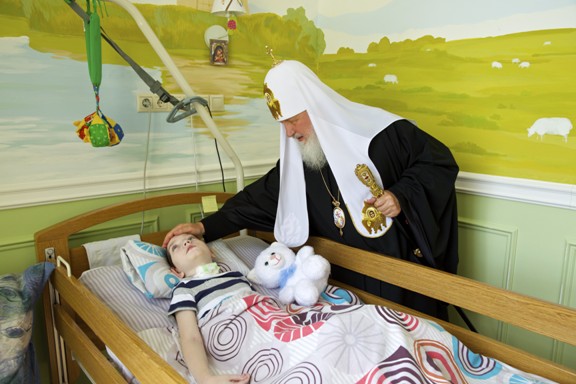 “Father, father! How sorry I am for you!” Iliusha moaned bitterly….I know what the doctor said to you about me….Don’t cry, and when I die get a good boy, another one…call him Iliusha and love him instead of me…” “I don’t want a good boy!  I don’t want another boy!” the captain muttered in a wild whisper, clenching his teeth.  “If I forget thee, Jerusalem, may my tongue…” he broke off with a sob and sank on his knees before the wooden bench.     Dostoevsky, The Brothers Karamazov

A family is one body, and often the spiritual burden which lies upon it is divided among its members unequally.  It happens that children shoulder a load beyond their strength and pay with their health for the sins and failings of their parents.

Here is the case of one family I know.   A seven-year-old girl became gravely ill; she had a prolonged high fever which refused to break, the doctors were unable to determine the cause of the illness, and the parents were on the verge of despair. The girl’s grandmother conveyed to them what one priest had said: the girl is sick because you do not go to confession nor communion, and your sins are weighing on the child.  Deeply affected by what they had been told, the parents began going to church; they repented of their sins, began partaking of the Holy Mysteries, and reformed their lives.  Their daughter’s illness passed.  It had befallen her by God’s allowance; through it the entire family was drawn close to the Church.

People sometimes wonder why it is that children suffer. All right, so we’re sinful, but… It is, by the way, one of Dostoevsky’s perennial concerns. The Brothers Karamazov, for example.  On grounds of human justice, the question is insoluble.  The answer can be found only through the perspective of eternity, of God’s providence.  Dostoevsky came to recognize this only after the death of his son, when he went to Optina to find some consolation and spoke to Elder Ambrose, although it was only just before his own death that he fully comprehended the spiritual meaning of the suffering of innocents.

My duties often take me to one of Moscow’s homes for mentally-retarded children.  Many of them don’t even get out of bed; many have been simply abandoned by their parents as though they were incurably diseased; here are children with severe developmental problems. They all suffer terribly, although many of them, because of their retardation, aren’t aware of it. Entering this house is like stepping into the depths of hell. And yet, it is precisely here that one can sense the sweetness of paradise; it comes from the hearts of those who live with God. Here are many children who go to church and who love the Lord.

After having been in the children’s home, one leaves with a feeling that perhaps this world-which the enemy of the human race is trying to turn into one big “Disneyland,” full of gum-chewing, grinning, senselessly happy robots-this fallen pornographic world is still hanging on only because there are children who, by their sufferings, are outweighing our godlessness and unrepentance in the scales of God’s justice.  The fate of these children will be revealed in eternity.  Their sickness and “abnormalities” are manifestations only of this earthly life.  If God did not create death-which entered the world through man’s falling away from God-He certainly did not create sickness.

Two and a half years ago there came to me for confession a sick twelve-year-old girl from this home.  She couldn’t put two words together, she would spin around like a top; her abnormal expressions and constant grimacing, everything about her said “deranged”.  And this girl began having confession and receiving communion each Sunday.

Within a year she felt a need for revelation of thoughts (whoever prays and confesses frequently understands what this means).  The girl began leading such a vigilant spiritual life as would astonish even those who consider themselves deeply believing and churchly. She began to practice the Jesus Prayer (“Lord, Jesus Christ, Son of God, have mercy on me, a sinner”), to battle against the devil’s provocations, to forgive offenses, to endure everything.  In the course of several months she learned to read and write, all signs of debility disappeared, an imprint of spirituality appeared on her face.  Everything she did or said conveyed sensitivity and discernment. Whenever I saw her my heart contracted with a recognition of the sinfulness and falsehood in my own life.

Then she was transferred to another children’s home, and for some time I did not see her.  But one day she came to me and said, “Father, don’t worry about me. I’m always with God.  He doesn’t leave me, even when I sleep…”

If, after this, all the wise men of the world should gather and present me with the tightest arguments that God does not exist, I would look at them with pity…

Sick children take upon themselves the exploit of martyrdom and foolishness in order that the Lord would not vent His wrath upon this world, and that we, perhaps thanks to them, mightstill have time for repentance.  But we, due to our lack of repentance and habitual disregard of our sins (instead we cast the blame for them on others), are not aware of this.

And so, we hear people murmuring: if God is just, as you claim, then how can He allow children to suffer?

Yes, God is just. He does not teach us to sin. He says, Be ye perfect even as your Father which is in heaven is perfect (Matt. 5:48).

We wouldn’t have any problem with the question of why it is children suffer if in this matter, as in everything, we looked upon Christ the Saviour and measured our life in light of Him.  Why do children suffer? For what reason did the Saviour suffer?  After all, He was sinless.  Every child is born into the world bearing upon itself the stamp of ancestral sin. But the Lord didn’t even have this.  He-who is purer than any newborn infant-suffered, and how!

Here, then, is the answer to the question of why children suffer.  For our sins.   For our carelessness concerning the salvation of their souls and our own salvation.  Our task as parents consists not only in providing for our children’s physical needs but primarily in educating them spiritually, in opening up for them the path to God.   Here is the word of the Saviour: Forbid them not to come unto Me (Matt. 19:14).

If we do not bring our child to church, if we do not teach him to pray, if we do not have icons in our homes, the Gospel, if we do not strive to live righteously, it means that we are hindering his way to Christ. And this is our principal sin which will lie also upon our children.

This is why our children suffer for our sins, even if they are innocent of them. We are tied to them by an invisible thread, in them is our blood, our spirit.  If they weren’t our children they wouldn’t suffer for us. But in that case they wouldn’t have been born from us.  Sin is a great evil because it causes innocent suffering.  But by the same spiritual law, through the suffering of some, the sins of others are redeemed.  “By His wounds are we healed,” we say, speaking of the Lord Jesus Christ, Who opened for us the door to salvation.

From the book When Children Are Ill; Counsels of an Orthodox Doctor, Moscow 1992.  Translated from Blagovestnik, parish bulletin of the Holy Virgin Cathedral in San Francisco, July 1993.