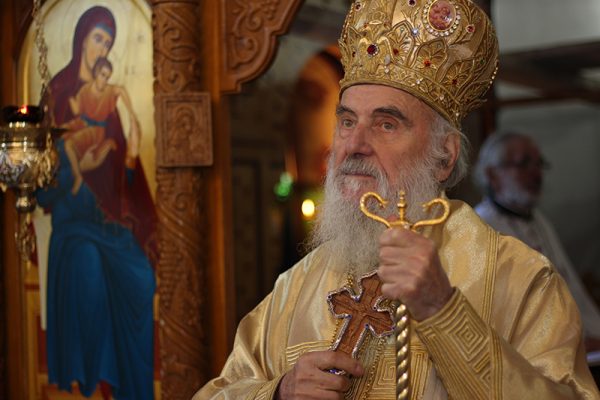 His Holiness Patriarch Irinej of Serbia, 90, has tested positive for COVID-19, though he is presently asymptomatic.

A press release from the Serbian Patriarchate reads:

As part of regular testing procedures and after epidemiological assessment, His Holiness Patriarch Irinej of Serbia was tested for SARS CoV2 with a PCR test. His Holiness tested positive yet is asymptomatic and generally feeling well. His Holiness has been admitted to a COVID hospital in Belgrade.

At least two other Serbian hierarchs previously suffered from the virus. His Grace Bishop Milutin of Valjevo tested positive in March and reposed in the Lord a few days later on March 29, reports OrthoChristian.

More recently, His Eminence Metropolitan Amfilohije of Montenegro tested positive for the coronavirus and suffered from pneumonia. Although he later tested negative for the virus and was slowly recovering, his health suddenly took a turn for the worse and he reposed in the Lord on October 30.

Patriarch Irinej served Metropolitan Amfilohije’s funeral at the Cathedral of the Resurrection in Podgorica, Montenegro on November 2. Following the repose of Metropolitan Amfilohije, the Metropolitan Synod of Montenegro chose His Grace Bishop Joanikije of Budimlja and Nikšić as temporary administrator, who has also tested positive for COVID-19, the Metropolis reported yesterday.

His Grace is feeling well and his vital parameters are stable. He remains under a doctor’s supervision.