Patriarch John X of Antioch: Orthodox Unity is the Red Line that Must Not be Crossed

Source: DECR
Pravmir.com team | 07 February 2019
During his visit to Moscow, His Beatitude John X, Patriarch of Antioch and All the East, in his talks with Russian media journalists, commented on the church situation in Ukraine. 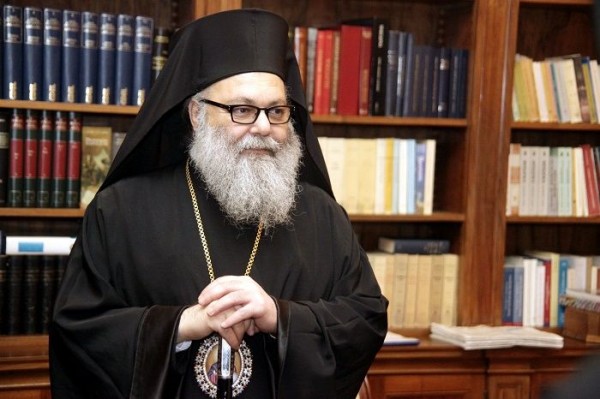 In his interview to the RT TV network, His Beatitude underscored ‘Concerning the situation of the Church in the Ukrainian state, I can express my regret since these actions have inflicted a damage on the Orthodox Church. We hoped that these steps would not be that fast and that the opinions of other Churches would be taken into account and an agreement would be reached through consultations. What happened did happen, and we ask the Lord to help us find acceptable ways for solving this problem. Orthodox unity is the red line that must not be crossed. Respect for the geographical boundaries of Orthodox Churches is a good sacred tradition.

According to His Beatitude, in the situation of the Ukrainian schism, there are also external factors. ‘Undoubtedly, present here is a political interference in church affairs. If politics has interfered in church affairs, it will inevitably bring in differences and schisms’.

Patriarch John believed that the only solution is a conciliar discussion on the situation. ‘It is the only format, just as the format of a family in which one of its members has fallen ill. Of course, there may be different points of view, there may be a discord, but the appropriate way of healing a problem that has arisen in a family is through dialogue, through benevolence and accord between its participants. Therefore, dialogue certainly remains to be the only way’.

In his talk with a RIA NOVOSTI correspondent, His Beatitude said that the Church of Antioch has already asked Patriarch Bartholomew several times ‘to get everybody meet and discuss the situation in Ukraine, for him to convene the Primates of Orthodox Church to talk thoroughly about all the problems in the world of Orthodoxy, especially this topic’. ‘Together with Primates of other Churches – Patriarch of Alexandria and Serbia and Archbishops of Cyprus, Greece and Albania – we tried to arrange our meeting and discuss this matter. Regrettably, it has not happened so far’, he said.

In his interview with Interfax-Religion, His Beatitude expressed the conviction that the possibility for such a meeting is real. ‘We have honest and open relations with heads of Local Orthodox Churches, and it is a guarantee of successful dialogue. Through meetings and dialogue every problem can be solved’, he said.

He is convinced of the need for a pan-Orthodox consensus in matters of the granting of autocephaly to a particular Church. ‘The more so, there should be the consent of the Mother Church to which it belongs’, His Beatitude stressed in his talk with a RIA Novosti journalist, ‘We are praying that the Lord may give us a chance to solve this problem’.

Answering a question from an Interfax correspondent, Patriarch John touched upon the topic of the preservation of Orthodox unity. ‘All the Local Orthodox Churches believe that they make up one Church. We represent the Church of Antioch, but here in Moscow we feel that you and we are one family, the faithful of the same Church. It is very important, despite of some disagreements. Disagreements have always existed in the history of the Church, just as brothers may happen to quarrel in any family, but we all would remain one family’.