Source: DECR
Natalya Mihailova | 02 June 2015
On May 29, 2015, His Beatitude John X, Patriarch of Great Antioch and All the East, met with a delegation of Russian parliament members and public figures at his residence in the Balamand Monastery. The delegation arrived in Lebanon after their trip to Syria bringing humanitarian aid of food stuffs and medicines. 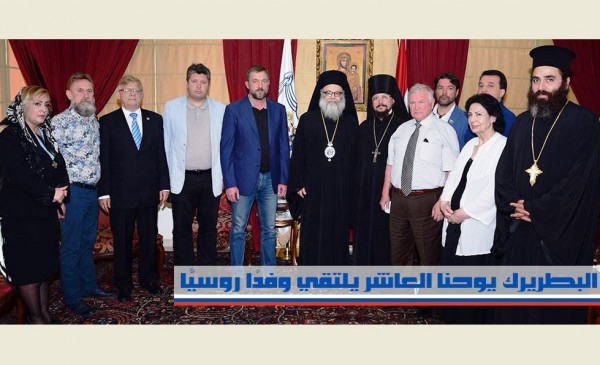 The delegation led by D. Sablin, member of Russia’s Federation Council, was accompanied by Hegumen Arseny (Sokolov), representative of the Patriarch of Moscow and All Russia to the Patriarch of Antioch, and Russian ambassador to Lebanon, A. Zasypkin.

During his talk with the Russian guests, Patriarch John spoke about the tragic fate of Syrian and Iraqi Christians who found themselves in the territories occupied by the terrorist organization ‘Islamic State’ and also shared his thoughts about the difficult internal political situation in Lebanon, a country which has stayed without a president for over a year. According to the Lebanese constitution, only a Christian can be the president elected by the parliament. Lebanon is the only country in the Arab world and in the Middle East in which the highest state post can be occupied by a Christian.

D. Sablin spoke about the trip to Syria, meetings with the highest leaders of the country, visits to a hospital and orphanages, and about the humanitarian aid the delegation had brought to the population in Damascus and Homs suffering from war.

Father Arseny informed Patriarch John about the divine service celebrated on May 28 at the church of the Russian Church Representation in Damascus. Among the worshippers were the delegation members and staff members of the Russian embassy in Syria.

After the audience, Archimandrite Jacob (Halil), father superior of the Balamand Monastery, took the delegation on a tour of the old cloister.