Patriarch John X to Speak about Christians in Middle East

Source: The Antiochian Orthodox Christian Archdiocese of North America
Natalya Mihailova | 23 July 2015
The Most Blessed John X (Yazigi), Greek Orthodox Patriarch of Antioch and All the East, will be visiting St. Vladimir’s Orthodox Theological Seminary on Monday, July 27, 2015, to receive an honorary doctoral degree conferred by the seminary Board of Trustees and Faculty Council. 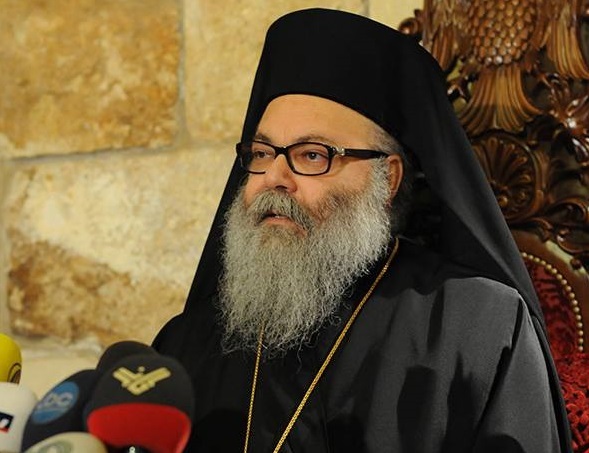 “As Executive Chair of the Board of Trustees of St. Vladimir’s Seminary,” said Alex Machaskee, “I am extremely pleased that we are conferring an honorary doctorate on His Beatitude John X, patriarch of Antioch and All the East.”

Seminary Dean, the Very Reverend Dr. John Behr, added, “It is our joy to welcome Patriarch John to our campus, and it is our honor that he is willing to accept a Doctor of Divinity honoris causa from our school.”  Father John also mentioned that His Beatitude is known to him through a personal connection: he is a fellow monk at the Monastery of St. Paul on Mount Athos (Agiou Pavlou), the same monastic community at which Fr. John’s brother, Fr. Evdokimos, resides.

The academic convocation will mark the second time within one year that His Beatitude has greeted the Dean and the seminary Chancellor/CEO, the Reverend Dr. Chad Hatfield. In December 2014, the seminary administrators jointly presented a gift of $8,000 to His Beatitude, to aid suffering Orthodox Christians in the Middle East. The gift represented a tithe (i.e., one-tenth) of the total $80,000 donated to the seminary during its highly successful #GivingTuesday campaign, also conducted in December.

Most viewed articles
Life Truly Genuine and Authentic in the Eyes of God107
Patriarch Kirill: “We Should Pray for Our Lord to Strengthen Fraternal Feelings of the Peoples of Holy Rus”90
How to Deal with Sin75
Holy Cincture of the Theotokos to arrive in France next week56
The Authenticity of the Vision of Christ in the Life of Saint Silouan55
The Bulgarian Church Can Canonize Its First Patriarch47
“The models par excellence are the great hesychast saints,” says Romanian Orthodox Bishop of Oradea41
Most popular authors
Pravmir.com team137
Fr. Theodore Stylianopoulos107
Archpriest Basil Ross Aden75
Aurelian Iftimiu56
Archimandrite Zacharias Zacharou55
Ștefana Totorcea41