Source: Voice of Russia
Natalya Mihailova | 04 May 2014
The Russian Orthodox Church is in deep grief over the new bloodshed in Ukraine as political radicals are trying to assert their convictions despite the loss of life, Patriarch Kirill of Moscow and All Russia said on Saturday, May 3, commenting in the latest events in Odessa, southern Ukraine, and the eastern Donetsk region, where several dozen people were killed. 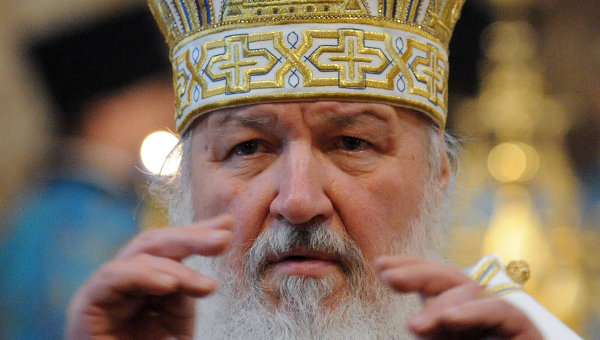 “Responsibility for this lies primarily with those who resort to violence instead of dialogue. Especially disturbing is the use of heavy army hardware in a civil standoff,” he said.

The patriarch believes that “the use of force is often motivated by adherence to political radicalism and denial of people’s right to express their convictions”.

“One political position cannot be proclaimed the only possible and compulsory one in modern Ukraine,” Kirill said, adding that the Christian values of peace, mercy and justice had formed the people of Ukraine.

He urged “all sides to refrain from using weapons and solve all questions through dialogue” as “there is no alternative to dialogue”.

“Ukraine can heal itself and embark on a path of building a decent life for its citizens only as a common home for people with different political convictions,” he said.

The patriarch expressed deep condolences to the families of those killed. “The terrible news of people burnt alive in the Trade Union House in Odessa turned over my soul and pierced it with excruciating pain. A hideous crime was committed before the eyes of the whole world, a crime with which neither heart nor mind can reconcile,” he said.

“I am praying for Ukraine to be saved and healed, for the bloodshed to be stopped, for the warring sides to be pacified, and for the people with different political positions to be able, with God’s grace, to listen to each other and understand that attempts to impose one’s opinion upon others by force lead to the destruction of a beautiful and blessed country,” Kirill said.

“At this time of trouble, my heart is with Ukraine, with each of its sons and daughters who areliving through anguish, grief, bewilderment, outrage and despair,” he said, TASS reports.