Source: Interfax-religion
Natalya Mihailova | 19 February 2016
Bellingshausen Station (Antarctica), February 19, Interfax - Patriarch Kirill of Moscow and All Russia believes Antarctica is a representation of the ideal humanity where there is no weapon, no military actions, and people from different countries selflessly help each other. 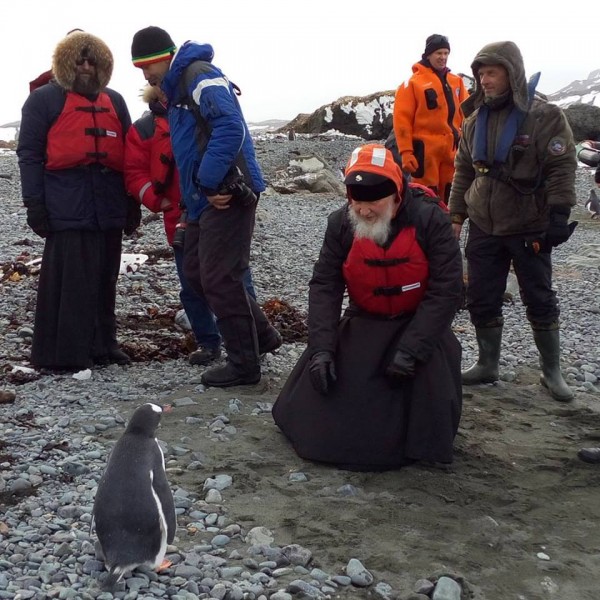 “Antarctica is the only place where there is no weapon, no military actions, no scientific research directed at working out new means of killing people (…). It is a kind of representation of the ideal humanity and evidence that people can live like this – without borders, without weapon, without hostile competitiveness, that they can cooperate and feel as members of one family,” the patriarch said speaking to the polar explorers at the Russian Antarctic Station Bellingshausen.

According to him, polar explorers, no matter what country each of them represents, extend each other their helping hand in difficult moments giving the example of cooperation.

The primate of the Russian Orthodox Church noted that it is not by chance that the only acting church in Antarctica is the Russian church at the Bellingshausen Station, which is called after the Holy Trinity. “Trinity is an ideal representation of unity,” the patriarch explained.

He reminded that St. Sergius of Radonezh built the Holy Trinity Church not far from Moscow and this church became a foundation of the main spiritual center of Russia – the Holy Trinity – St. Sergius Lavra, and the Church links unity of Russian principalities in the 14th century and liberation from the Mongol-Tatar Yoke with his name.

The patriarch added that St. Sergius used to say that “looking at the Holy Trinity, we can overcome divisions of this world.”

“It is very nice that there is a church in Antarctica where polar explorers overcome hated divisions of this world. Antarctica is a place with special spiritual and humanitarian significance for the whole world. Thank you for the example, you are showing the world,” the patriarch told the scientists.

He wished them “to stick to the polar fraternity and work for the welfare of the whole humanity.” Patriarch Kirill gave each of them an icon of St. Vladimir with his blessing and gifted some of his books to the station.