Source: DECR
Natalya Mihailova | 27 July 2015
The millennium of the demise of the Holy Prince Vladimir Equal-to-the-Apostles is widely celebrated in Russia as a church-state occasion. The most important events of the jubilee year will take place in the capital from July 26 to 28, 2015. 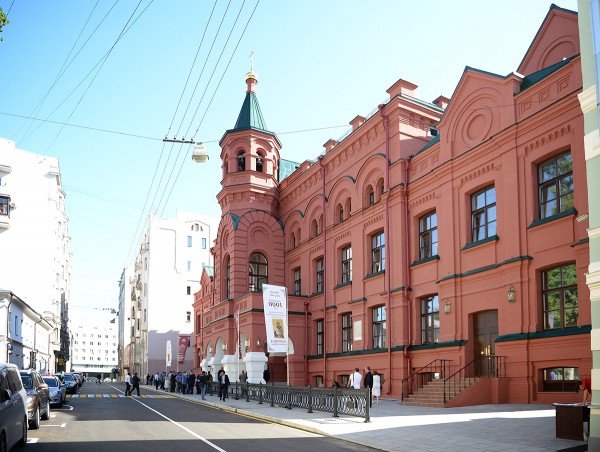 On July 26, His Holiness Patriarch Kirill of Moscow and All Russia visited the Moscow Diocesan House in Likhov Pereulok. The restoration of the historic compound was carried out as part of the Presidential program of celebrations devoted to the millennium of the demise of the Holy Prince Vladimir. 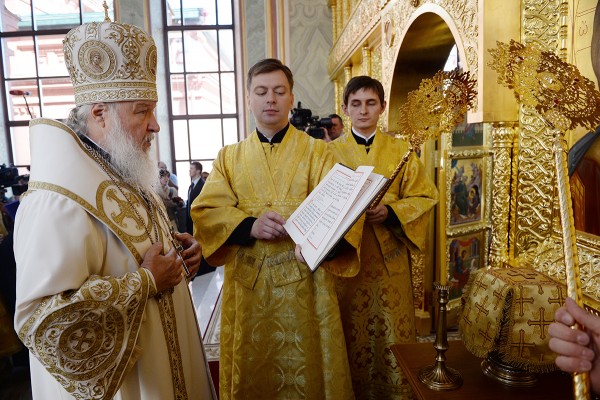 The Primate of the Russian Orthodox Church celebrated the Great Consecration of the Chapel of the Holy Prince Vladimir Equal-to-the-Apostles at the Moscow Diocesan House and the Divine Liturgy at the newly consecrated church. He also consecrated the lower church dedicated to St Tikhon and the Canonized Fathers of the 1917-1919 All-Russia Local Council of the Russian Orthodox Church.

His Holiness was assisted by a great assembly of high-ranking hierarchs as well as Moscow clergy. The service was attended by high state and city officials, prominent businessmen and benefactors.

The service was broadcast by the Soyuz TV network.

After the liturgy, His Holiness was greeted by Archpriest Vladimir Vorobyev, president of the St. Tikhon Orthodox University of the Humanities and rector of the newly-consecrated chapel. He presented His Holiness with an icon depicting St. Tikhon, Patriarch of Moscow and All Russia and St. Vladimir, Metropolitan of Kiev, who bring the Diocesan House to the Lord. 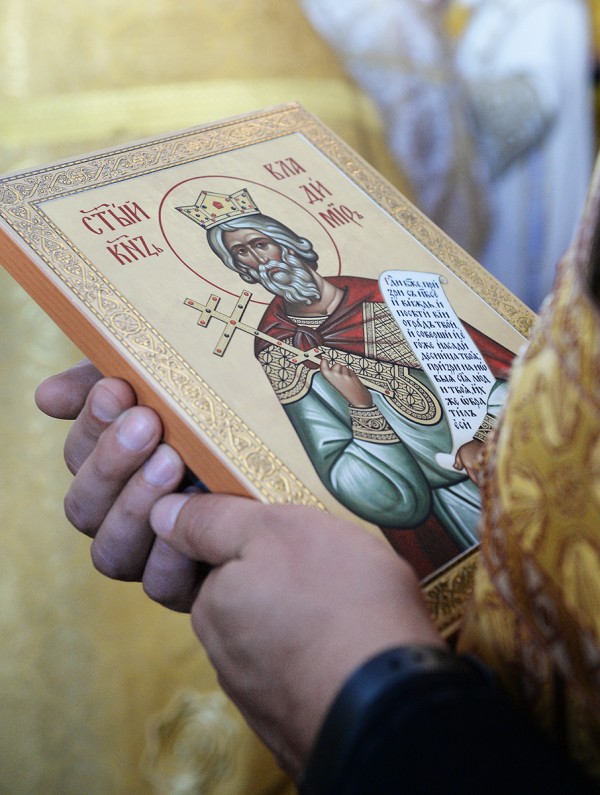 Students of the St Tikhon University addressed His Holiness with words of gratitude and presented him with an icon of St. Vladimir.

The Presidential Envoy to the Central Federal Region, A. Beglov, conveyed to Patriarch Kirill and professors and students of the St. Tikhon University a message of greetings from President Vladimir Putin, who congratulated them on the completion of the restoration work and the consecration of the Moscow Diocesan House chapel.

‘It is a historic building. It is our common history. In this building in 1917 the Local Council made a very important and necessary decision on the independence of the Russian Orthodox Church’, Mr. Beglov said, stressing that many decisions of the historic Local Council are implemented today through the efforts of His Holiness Patriarch Kirill.

His Holiness gave to the chapel a chest with a part of relics of St. Tikhon, Patriarch of Moscow and All Russia, and an icon of St. Cyril and Methodius, Teachers of the Slavs, with St. Vladimir Equal-to-the-Apostles.

In recognition of the work for restoration of the Chapel of St. Vladimir, Patriarch Kirill awarded Archpriest Vladimir Vorobyev the Order of the Holy Prince Vladimir Equal-to-the-Apostles and a pectoral cross produced for the occasion of the millennium.