Source: DECR
Natalya Mihailova | 27 July 2015
In the evening of July 26, 2015, after the Russian Field concert, His Holiness Patriarch Kirill of Moscow and All Russia attended the reception given by the Moscow mayor at the Catherine the Great Hall of the Grand Palace in Tsaritsyno. 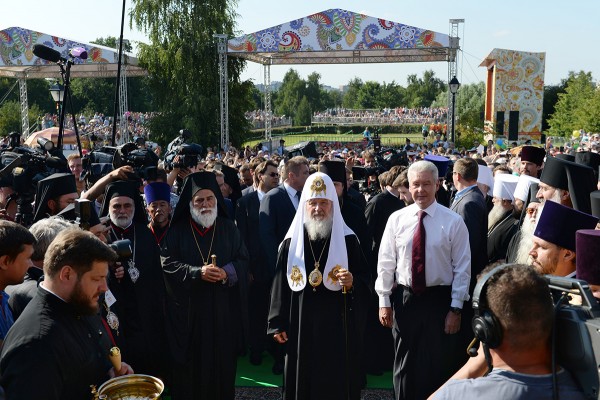 Moscow Mayor S. Sobyanin welcomed the guest to the hall.

Present at the reception were representatives of the following Local Orthodox Churches:

There were also representatives of the Japanese Autonomous Orthodox Church. 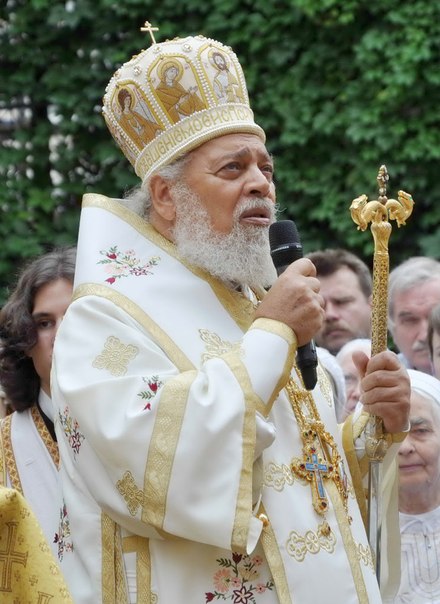 Metropolitan Niphon of Philippople, representative of the Patriarch of Antioch and All the East to the Patriarch of Moscow and All Russia, made a speech on behalf of the delegation of the Local Orthodox Churches who have come to Moscow for the millennium. He said in particular, ‘Moscow has become a place uniting the Orthodox world in the spirit of brotherhood and peace, a place where the hospitality of the Russian people has united us in love, a place where we can bear witness to our unity in face of the challenges of time’.

Addressing Mr. Sobyanin on behalf of all the delegations, Metropolitan Niphon pointed to the contribution made by the mayor to the construction of new churches and preservation of the spiritual and cultural heritage. ‘When I first came to Moscow, there were 46 churches. Now there are about one thousand of them. The help you give to the Church by supporting projects of patriotic education, social service and enlightenment is of great importance of course, for it forms the Christian system of values in society’, he stressed, adding, ‘For representatives of all the Local Orthodox Churches, Moscow is one of the pillars of Christian civilization. It has become possible thanks to the fact that St. Vladimir Equal-to-the-Apostles had the courage to devote all his people to God’.

Patriarch Kirill thanked the Moscow mayor for this work to beautify the city. ‘I would like to wish you God’s help in your efforts as mayor and to express hope that the cooperation of Moscow authorities and the Church will develop for the good of the capital and our whole homeland’, he said.

His Holiness also thanked the representatives of the Local Orthodox Churches who came to Moscow for the millennium celebrations, saying, ‘I wholeheartedly thank you for coming, for being with us. May the celebrations give you the opportunity to get in touch with our spiritual and cultural life, to feel our people’s pulsation and to see how Orthodoxy is being strengthened here today’.

According to His Holiness, this strengthening is beneficial for all the Local Orthodox Churches because they make up the one undivided Orthodox Church. ‘Local Churches does not mean being separated from one other. They are all participants in the One Holy Catholic and Apostolic Church’, he stressed.