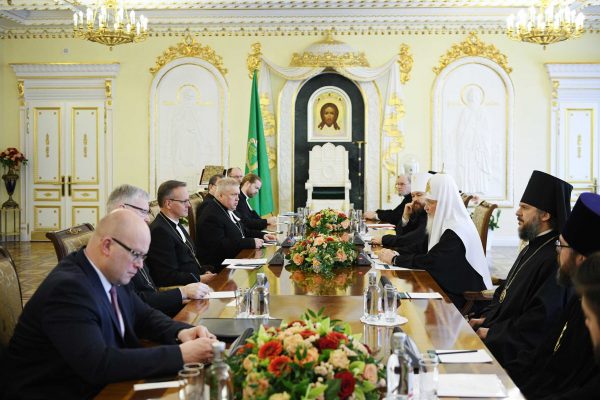 On February 28, 2019, His Holiness Patriarch Kirill of Moscow and All Russia met with the head of the Evangelical Lutheran Church of Finland, Archbishop Luoma of Turku and Finland, at the Patriarchal and Synodal Residence in the St. Daniel Monastery in Moscow.

Also attending the meeting was H.E. Mikko Hautala, Ambassador of the Republic of Finland to the Russian Federation.

Welcoming the head of the Evangelical Lutheran Church of Finland, Patriarch Kirill said that he was glad to meet with the high guest in Moscow. His Holiness also mentioned the previous meeting, which took place in autumn 2019 in St. Petersburg.

‘We are living at a difficult time from the perspective of the political situation in the world,’ His Holiness said in particular, ‘But political storms is one thing and relation between Christians, between Churches is another. I remember the hard time during the ‘Cold War’, when East and West were in a state close to an armed conflict. I remember how active Christian contacts were at that time. It was really a bloom of inter-Christian relations because the awareness of our common responsibility for the world, for cooperation between countries, between people was a great impetus for developing these relations’.

As Patriarch Kirill noted, there is a different situation in the world today, ‘but Christians, Christian Churches and organizations can do much to make the world a better place’.

‘The Russian Orthodox Church, as you know, lives her own life. We are fully aware of responsibility for the spiritual state of our people and give especially close attention to the youth. Today’s challenges have formed our agenda and our priorities. It is our deep conviction that the witness of the Orthodox Church borne within a secular society is very important because it humanizes the society or, at least, is called to humanize it’, His Holiness stated.

‘There are also external challenges that need a response. Of course, I cannot help sharing your concern for the situation which has developed in Ukraine. I will not discuss the actions of Patriarch Bartholomew of Constantinople, with which I disagree. I simply want to say that Patriarch Bartholomew had no right to interfere in the internal affairs of the Ukrainian Church. There are no laws on the basis of which he could do what he has done’, Patriarch Kirill said.

The Primate of the Russian Church pointed to the violation of religious rights and freedoms taking place in Ukraine today: ‘A ‘united church’ has been artificially made of two schismatic groups. This ‘united church’ is not recognized by any Orthodox Church except for Constantinople, but it is supported by the government, by the state. Everyone who does not wish to join this ‘church’ is subjected to discrimination. I will not be afraid of using such a strong word as persecution that is carried out by the authorities against the canonical Ukrainian Orthodox Church. It is exactly what is happening now’.

‘I appealed in a letter to some leaders of European countries, stressing that at stake are violations of human rights. I was struck by one of the replies I received from my addressee who did not pay attention to the violation of human rights; he simply said that it was about internal problems of two religious groups. For this reason, they cannot interfere in it. But the fact of a direct violation of rights and people’s real suffering is ignored’, His Holiness stated,

Among the topics of the talk were also bilateral relations between the Russian Orthodox Church and the Evangelical Lutheran Church of Finland. Patriarch Kirill reminded his guests that in 2017, a working group for bilateral dialogue was set up to put on the agenda the pressing problem of the theology of peace.

‘Today, the theology of peace is not free form ideological and political influences either; this topic requires courage and ability to pronounce prophetic words, for today many speak of peace but there is no peace on the globe. In the 20th century, we used to develop this theme in our dialogues with Western Christian partners. At that time, the theme of the freedom of theology from ideology and politics was in the focus of our attention. And it was understandable because at least the Russian Church was in a country in which there was an ideological control over the spiritual life of society. But something similar is taking place today too. Very often theology and theological approaches are also determined by ideological preferences. The theme of the Church’s prophetic ministry, the problem of religious freedom in the broad sense of this word, are very relevant today as well’, he stressed.

Patriarch Kirill also said that international conflicts should not remain outside the field of vision in inter-Christian dialogue, noting that Churches ‘should not have either political and, the less so, ideological assessment of these conflicts’.

‘However, we cannot ignore these conflicts because they cause suffering to thousands and thousands of people’, he said, ‘In this connection, I would like to mention certainly the suffering of the Syrian people. Hundreds of thousands of Christians have left that country because of the military actions. At the height of this conflict, our Church very loudly stated the need to stop all kinds of military actions and lead people out the situation in which certain groups could have been be subjected to genocide. I point out with satisfaction to the common stand taken on this problem, which was revealed during my meetings with Pope Francis and many other religious leaders’.

His Holiness also reminded his guests that the year 2020 will mark the 50th anniversary of the dialogue between the Russian Orthodox Church and the Evangelical Lutheran Church of Finland and expressed hope for the resumption of the theological dialogue between representatives of the two Churches.

‘I believe it would be worthwhile for us to think over students’ exchange as well. There are difficulties of course, connected with the languages – both Russian and Finnish are difficult languages. But I think it should not be a dividing wall for us to develop the student’s exchange together’, His Holiness said.

‘Important for us is also the subject of diakonia, the social service of the Church, which is actively developing in our Patriarchate. I know that you support the volunteer movement. It coincides with my position too. I support volunteer movements in every way and initiate them because volunteer activity helps us, among other things, to develop our youth work as well.

‘We have to develop our work with full responsibility before God and before all the people of our pastoral concern’, His Holiness said in conclusion.

In his response, the head of the Evangelical Lutheran Church of Finland thanked Patriarch Kirill for the invitation to visit Moscow and, on behalf of the Finnish delegation, congratulated him on the 10thanniversary of his enthronement.

‘We appreciate the possibility to meet with you and continue the dialogue both on personal and inter-church level’, Archbishop Tapio Luoma said.

‘In you statement, you mentioned the situation in Ukraine. We are aware that church events in Ukraine have caused concern and anxiety, that it is very painful, especially in the Orthodox world. We, Finnish Christians, are praying that the conflict may be resolved and that God may show the way of reconciliation and solution of the problems’ the archbishop stated.

He also expressed deep concern over the grave situation of Christians in the Middle East, who, being subjected to persecution by extremists, are forced to leave their homeland.

During the talk, the high guest underscored the need for active cooperation aimed to strengthen the influence of the religious factor in public and international life, saying, ‘Despite the changes in the world, both the Evangelical Lutheran Church of Finland and the Russian Orthodox Church feel responsible for their countries, for their people and for their future’.

He also pointed to the need for further development of theological discussions: ‘The theological conversations, which took place between our Churches, have shown that mutual exchange and talks in the Christian spirit help us to seek together the will of God in our time and the ways in which the Lord wishes to lead us into the future’.