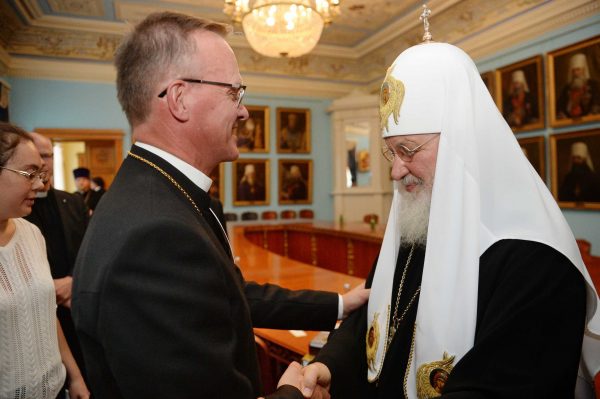 On September 5, 2018, His Holiness Kirill, Patriarch of Moscow and All Russia, met with Archbishop Tapio Luoma of Turku and All Finland and a delegation of the Evangelical-Lutheran Church of Finland at the St. Petersburg diocesan administration in the St. Alexander Nevsky Laura of the Holy Trinity.

Welcoming the guests, Patriarch Kirill congratulated Archbishop Tapio Luoma on his election as head of the Evangelical Lutheran Church.

‘We consider your Church and the people who belong to your Church to be our friends’, His Holiness said, ‘Today we mark the 40th anniversary of the demise of His Eminence Nikodim, remembering, among other things, his contribution and that of Archbishop Martti Simojoki to the establishment of special relations between our Churches.

‘I personally participated in the very first steps undertaken by our Church for mutual rapprochement. I have already recalled on several occasions how Easter was celebrated at the St. Nicholas’s Cathedral in 1966 according to the statute precisely because Metropolitan Nikodim invited Archbishop Martti Simojoki to take part in the procession with the cross. Each year the authorities tried to frustrate the procession by provoking violent clashes; many Orthodox people simply suffered, and now, we managed for the first time to celebrate Pascha peacefully because walking around St. Nicholas’s together with Metropolitan Nikodim was Martti Simojoki. Of course, we remember those remarkable pages in our bilateral relations with gratitude.

‘Today it is not so easy in our relations, not through the fault of the Russian Orthodox Church and, perhaps, not through the fault of the Finnish Lutheran Church. But what is happening in Western Protestantism creates new obstacles for our relations. Nevertheless, we continue to regard you as our privileged partners among all the Protestant churches in the world. I do not know whether it will keep you from steps that make our dialogue difficult, but I wanted to say that.

‘In September 2014, I met in Moscow with your predecessor Archbishop Kari Maakinen. At that time, I utterly clearly set forth our position but I cannot say that I was understood by my interlocutor. We are well aware what happened later, as Archbishop Maakinen made certain public statements in support for some innovations in the Finnish legislation. We were upset, of course, but there is information that by no means a majority of your faithful support these innovations.

‘The Finnish people are a conservative people, in a good sense. One can see it when one travels through your farmsteads. It is like an oasis in Western Europe, as people cherish family values, their way of life and special way of doing agricultural work. And, I believe it is very important that the foundations of your national life should be protected.

‘To clarify to the full our and your views of the problems which arose, we continued our contacts also in the format of bilateral conferences on Christian anthropology and marriage. It was an important moment when the assembly of bishops of your Church adopted in August 2015 a report on amendments to the Law of the Finnish Republic on marriage. According to this document, despite the amendments made to the state legislation, your Church will continue administer only the marriages that conform to the traditional biblical understanding. I congratulate you on this decision and thank you for this step as it opens a way towards the establishment of full-fledged contacts and development of relations between our two Churches.

‘Our consultations have resulted in the setting up of a working group for bilateral dialogue; and it met in May 2018. Thank you for your meeting with its participants. I hope that with your support and my beneficial attitude we will continue theological discussions.

‘In 2020 we are to mark the 50th anniversary of our dialogue. The working group has proposed to renew this dialogue and put the theme of a theology of peace on its agenda. It not an easy topic; it used to be extremely ideologized in the past. During the cold war everybody spoke about peace but no one really wanted it. I remember an inner discomfort I experiences when I had to discuss this topic under the Soviet Union. I wanted to speak about the anthropological foundations of human differences, about the commitment to biblical principles of peace but it could not be always formulated as it should be’.

According to His Holiness, ‘today the theology of peace is not free either from ideological and political influences. This theme requires courage and ability to pronounce prophetic words, for today many speak of peace but there is no peace on earth.

‘I think we should limit ourselves to the issues of theology. In particular, it is important for us that there should be an exchange of experience in the sphere of diakonia. Social service in our Church is actively developing now. On my initiative, the Bishops’ Council made a very important decision that in all the parishes of the Russian Orthodox Church, which have minimal financial means, the staff should also include social and youth workers, missionaries and teachers. I cannot say that we have managed to implement this decision but in most of the Russian Church parishes this system is already working’. The Primate also said that an exchange of information about changes that have taken place in recent times in the life of Christians in Russia and Finland is helpful.

He noted with regret that the Western media often present the church-state relations in Russia in a distorted way. ‘I would like to say that Patriarch Kirill is as free today as nobody was in the history of the Russian Church. I do not know whether Primates of other Orthodox Church are as free. The Russian Church is completely free from any political influence in the country; it maintains an equal dialogue with the authorities and this for the first time in all her history. We never negotiate our actions with the authority, be they internal or external actions of the Church. We ourselves, in a conciliar way, define our life at the Synod sessions. Very often in a benevolent dialogue with the President, I tell him what the Church is doing and by God’s grace he always takes this news very positively. I believe, it is very right and I hope that this autonomy of the Church will continue.

‘Our initiatives concerning our work abroad also stem from our church awareness; nobody asks us for anything. But when we see, for instance, what is happening in Syria, we realize that we should help Christians and not only Christians, in their suffering. That is why we take an active part in giving aid to the Syrian people, to the Orthodox Church of Antioch. We involve in this work not only Orthodox people and for this reason the subject of common humanitarian missions in the modern world is of interest for us as well.

In this response, the head of the Evangelical-Lutheran Church of Finland thanked His Holiness for the hospitality accorded at the events marking the 40th anniversary of the demise of Metropolitan Nikodim. The hierarch noted the readiness of the Russian Church for an open discussion of the existing problems. ‘Respect and confidence can be only based on openness and honesty. We appreciate such relations and for this reason would like to look to the future with hope together with the Russian Orthodox Church’, Archbishop Tapio Luoma concluded.

Most viewed articles
First Church in the Antiochian Archdiocese Named for St. Xenia of St. Petersburg Prepares for Feast Day284
Patriarch Kirill: Not Only People, But Churches Too, Can Depart from God163
My World’s Different104
Patriarch Porfirije of the Serbia: Our Position on the Church Issue in Ukraine Has Not Changed89
Brooklyn Street Co-Named for Antiochian Pastor Who Served a Half Century There85
Thoughts on Theophany and Revelation77
Metropolitan Hilarion: the Church and traditional confessions have done everything possible to improve the situation in Kazakhstan69
A Christianity of the Catacombs68
Archbishop Makarios of Australia: ” the Great privilege of the Orthodox Church is that we live in communion”21
4-400×6001
Most popular authors
Pravmir.com team626
Protopresbyter Themistoklis Mourtzanos104
Peter Samore85
Elissa Bjeletich77
Archpriest Lawrence Farley68