Source: DECR
Natalya Mihailova | 13 May 2018
Meeting of the Working group for cooperation between the Russian Orthodox Church (ROC) and the Evangelical Lutheran Church of Finland (ELCF) took place in Helsinki, Finland, on 7 May 2018. 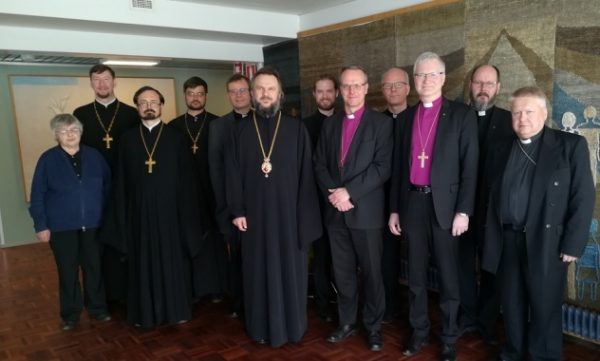 The decision to set up the working group was taken at the session of the Holy Synod on October 6, 2017. The Moscow Patriarchate is represented in the group by Archbishop Amvrosy of Petergof, rector of the St. Petersburg Theological academy and seminary, co-chair; Archpriest Vladimir Hulap, vice-rector for academic work of the same academy; Archpriest Dimitry Yurevich, head of the department for Bible studies of the same academy; Hieromonk Stefan (Igumnov), secretary for inter-Christian relations of the Moscow Patriarchate’s Department for External Church Relations (DECR); and Ms Yelena Speranskaya, a DECR consultant and lecturer at the Moscow theological academy.

The sides presented reports on the recent topical events in the life of both Churches. Archbishop Amvrosy told the participants about the Bishops’ Council of the Russian Orthodox Church of 2017 and the important documents it adopted, for instance, “Regulations on the Monasteries and Monasticism” and “On Canonical Aspects of the Church Marriage” and also about the state accreditation of several theological educational institutions of the Moscow Patriarchate, mentioning the first candidate’s dissertation on theology recognized by the state.

Reports on inter-Christian dialogue were presented by Rev. Tomi Karttunen and Hieromonk Stefan. During the discussion of the persecutions against Christians and the church aid to the suffering brethren, he told the participants about the recent peace initiatives of His Holiness Patriarch Kirill of Moscow and All Russia in the Middle East, and also about successful humanitarian inter-Christian and inter-religious projects being implemented with the blessing of His Holiness under direct supervision of the DECR chairman Metropolitan Hilarion of Volokolamsk.

Presented at the meeting were reports on topics that can be put on the agenda of theological talks between the ROC and the ELCF, for instance, religious extremism and preparation for Holy Communion from theological and practical point of view. The participants met with the recently elected head of the ELCF, Bishop Tapio Juhani Luoma Archbishop Amvrosy congratulated him on the election on behalf of His Holiness Patriarch Kirill of Moscow and All Russia. Bishop Luoma conveyed his greeting to His Holiness and declared his firm intention to develop coopertation with the Russian Orthodox Church.

The working group discussed prospects of dialogue between the ROC and the ELCF and worked out proposals for aspects of possible  cooperation and topic for theological talks which will be presented to the authorities for approval. The next meeting of the working group was proposed to be held in St. Petersburg in May 2019.