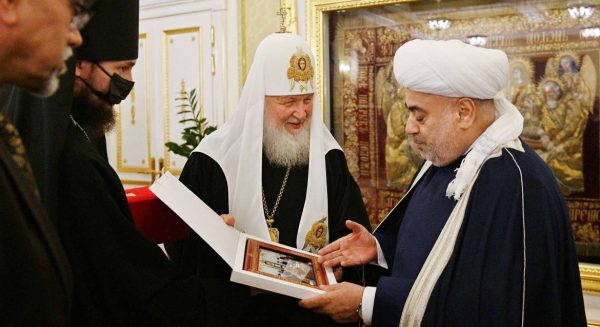 Faith in God and a similar system of moral values ​​is the advantage of religious leaders over politicians when they discuss complicated issues, said His Holiness Patriarch Kirill of Moscow and All Russia.

During a meeting with the Chairman of the Caucasian Muslims Office, Sheikh-ul-Islam Allahshukur Pashazadeh on October 12, His Holiness Patriarch Kirill noted that when it comes to overcoming a military conflict, “the political factor is present and sometimes dominates,” and complicates the negotiations, reported the website of the Department for External Church Relations of the Moscow Patriarchate.

“The advantage of discussing complicated issues by religious leaders is that we have a common basis: our faith in God, the system of moral values ​​to which we are committed, a certain decency, and trust in each other,” the Primate of the Russian Orthodox Church said.

He noted that during more than 30 years of his acquaintance and communication with Allahshukur Pashazadeh, there was not a single incident and not a single topic that would separate them and create some kind of tension.

“Indeed, we have always found, find and, I think, will find a solution to the issues that we have been discussing,” concluded the Patriarch.

It is noted that a trilateral meeting between His Holiness Patriarch Kirill, Supreme Patriarch and Catholicos of All Armenians Garegin II and the Chairman of the Spiritual Directorate of Muslims of the Caucasus Sheikh Allahshukur Pasha-zadeh is being held on October 13, dedicated to the topic of the Karabakh settlement.

“I believe that the authority of the spiritual leaders of Azerbaijan and Armenia will manage to have a beneficial effect on the minds of the people, and I believe that the very fact of today’s meeting and the dialogue between them will become an example for everyone,” the Patriarch said to the news agency “Interfax-religion”.

“Religious wars are a terrible sinful page in the history of mankind, and today we must do everything so that the concepts of “religion” and “war” do not merge into one,” said His Holiness Patriarch Kirill.