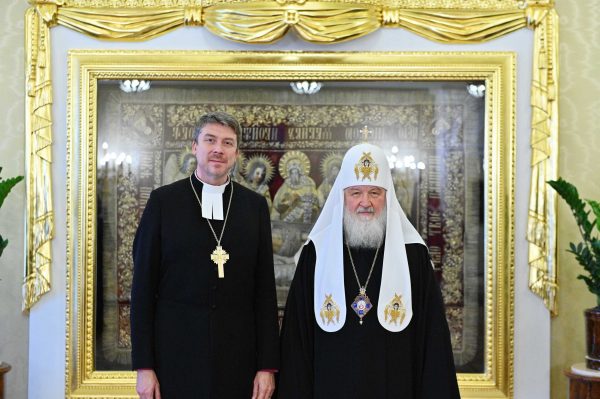 On 29th November 2019, at the Patriarchal and Synodal residence in St. Daniel’s Monastery in Moscow, His Holiness Patriarch Kirill of Moscow and All Russia met with Archbishop Urmas Viilma, head of the Estonian Evangelical Lutheran Church (EELC).

They were joined in the meeting by Bishop Tiit Salumäe of the EELC Western and Northern Region; Mr. Margus Laidre, Ambassador Extraordinary and Plenipotentiary of the Republic of Estonia to the Russian Federation; Archimandrite Philaret (Bulekov), vice-chairman of the Moscow Patriarchate’s Department for External Church Relations; Hieromonk Stefan (Igumnov), DECR secretary for inter-Christian relations; and Mr. Philip Champion of the DECR Secretariat for Inter-Christian Relations.

The Primate of the Russian Orthodox Church cordially greeted the high guest, noting that Estonia evokes in him warm memories of his childhood and youth.

“As a child and later as a young man I spent every summer in Estonia, visiting the Pühtitsa Convent in Kuremäe. Being a citizen of St. Petersburg, I used to go to Estonia very often. There I had many acquaintances, including those among the Estonian population, and so I have very vivid memories of Estonia’s scenery,” His Holiness said, noting a good level of bilateral relationships between the Russian Orthodox Church and the Estonian Evangelical Lutheran Church.

“Today our Church in Estonia numbers over 170 thousand people,” Patriarch Kirill continued, emphasizing that it is six times more than the number of members of another Orthodox structure acting in Estonia, which belongs to Constantinople.

“There is such great difference in the number of believers, but we have much less churches. Of course, we feel certain discomfort and ask ourselves: why is it so? We see injustice in this situation. Perhaps, there are some political motives, but in dealing with church issues we must distance ourselves from political sympathies and antipathies,” His Holiness added.

“At present the First Hierarch of the Estonian Church is Metropolitan Yevgeny who for many years was the rector of the Moscow Theological Academy,” Patriarch Kirill said.

The Primate of the Russian Orthodox Church especially noted the firm position of the Estonian Evangelical Lutheran Church in upholding Christian values. His Holiness stated with regret that a number of Churches in the West have long being guided in their life not by the Gospel, but by the legislation of their countries which is constantly changing, becoming ever more liberal.

Archbishop Urmas Viilma thanked His Holiness Patriarch Kirill for the meeting and reminded all those present about the visit of the Primate of the Russian Church to Estonia in 2013.

Having mentioned the good relationships between the Russian Orthodox Church and the Estonian Evangelical Lutheran Church, the Lutheran hierarch pointed out that the bilateral dialogue is also developing within the framework of the Estonian Council of Churches.

The EELC head noted the contribution of the Estonian Orthodox Church of the Moscow Patriarchate to the construction of new churches in the territory of Estonia.

Archbishop Viilma emphasized that the Russian Orthodox Church and the Estonian Evangelical Lutheran Church take the same position with regard to defending Christian values, as well as with regard to the pressing problems and challenges facing society these days.