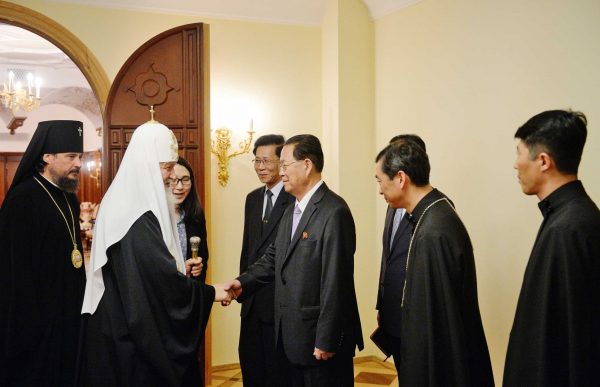 On August 27, 2018, His Holiness Kirill, Patriarch of Moscow and All Russia, met with the chairman of the Orthodox Committee of the Democratic People’s Republic of Korea, Vitaly Kim Ji Son, and other representatives of the DPRK, at the Red Hall of the Cathedral Church of Christ the Saviour in Moscow.

From the Russian Orthodox Church there were Archbishop Sergiy of Solnechnogorsk, head of the Moscow Patriarchate administrative secretariat and administrator of the Moscow Patriarchate parishes in East and South-East Asia; Rev. Nikolay Stolbikov, Khabarovsk seminary expert in the work with foreign students; Rev. Alexander Volkov, director of the Patriarchal Press Service; and D. Petrovsky, Department for External Church Relations.

Addressing the participants in the meeting, His Holiness said, ‘Dear brothers, I am glad to welcome you to Moscow, especially Brother Vitaly in his capacity of chairman of the Orthodox Committee of the Democratic People’s Republic of Korea. It is your first visit. Your predecessor visited Moscow several times. And I would like to say that I am always glad to receive our brothers from Korea. I have been to both the North and the South and I have been imbued with respect for the Korean culture, for monuments of the Korean history. I should say I feel personal sympathy for the Korean people, which has been inspired by my visits to both North and South Korea’.

His Holiness noted that the Russian-Korean relations have a long history, though diplomatic relations were officially established rather late, in 1884. In 1897, a Russian Orthodox Mission was founded in Korea.

‘I would like to express special satisfaction with the attention that the leader of your country Kim Jong-un has shown for our church. May be, Mr. Kim Jong-un will someday wish to visit this church. For us it would be a very significant event. For this event I could send to Pyongyang a high-ranking delegation of the Russian Orthodox Church.

‘It is remarkable that you send young people for training at Khabarovsk Seminary. In the last two years, four students of yours were trained in our seminary and have already been ordained as deacons. I remember how in 2006, during my visit to Pyongyang, I ordained one of the deacons as a priest. Yesterday I had an opportunity to ordain Father Vladimir to priesthood. And there will be another ordination tomorrow, also to the rank priest. I believe, with the emergence of Orthodox clergy in North Korea the needs of Orthodox believers will be met.

‘You certainly know that an Orthodox church was built as far back as 1900 in the South, in Seoul. We are making some efforts for its restoration but, unfortunately, it is still impossible for some reasons we do not fully understand. But we intend to restore the church so that the Orthodox faithful could make their joint contribution to a peaceful reunification of their homeland’.

Patriarch Kirill noted with satisfaction that the political situation in the Korean Peninsula is developing in a positive direction. ‘It is my deep conviction that a comprehensive settlement of the Korean Peninsula’s problems can be achieved only through peaceful means. It is my opinion that the world community’s task is to create conditions for the much-suffering Korean people to overcome divisions brought about by political collisions of the 20th century. And the world community should support these efforts of the Korean people for unification but should not interfere in the internal affairs of the Koreans. It is my conviction that the people in the North and South Korea can overcome the existing division on their own, without interferences from outside’, His Holiness stressed.

Patriarch Kirill described as epoch-making the meeting between the DPRK leader Kim Jong-un and the president of the Republic of Korea Moon Jae-in. ‘We welcome the very fact of their meeting, of course, and the signing of a respective document on April 27. It was really an epoch-making event. I believe the signed declaration opens up quite concrete opportunities for intensifying the process of integration of the two parts of Korea. We very much appreciate the proclaimed principles of the Korean North-South relations, such as national reconciliation, love of peace, and desire to unite the Korean people. And your leader’s meeting with President Trump has become one of the steps towards fixing the positive dynamic for a settlement of the regional problem. It is very important that this epoch-making event should help lower the level of tension in the Korean Peninsula. I believe that under the declaration signed, it is possible and necessary to develop humanitarian cooperation in the Korean Peninsula.

‘Russia could and should have taken part in this process. And we as a Church would be ready to develop humanitarian contacts including contacts between believers in our countries.

We are very glad that you are with us today. God grant that the Russian Orthodox Church’s relations with the Orthodox Christians in the Democratic People’s Republic of Korea may develop and that relations between our countries and peoples may become strong’, His Holiness said in conclusion.

In his response, Mr. Kim Ji Son warmly thanked the Primate of the Russian Orthodox Church for the warm welcome and special attention given to the North Korean delegation. He noted that he and his fellow travellers were making a very intense and interesting pilgrimage to Russia, visiting many Orthodox churches and monasteries. He said that the visit showed once again to the guests from North Korea that the Russian Orthodox Church played an exceptional role in Russia’s history and culture. He added that the church of the Holy Trinity in Pyongyang carried out its service successfully.

In conclusion of the meeting Patriarch Kirill presented Vitaly Kim Ji Son the Medal ‘In Memory of the Centenary of the Restoration of Patriarchate in the Russian Orthodox Church’.