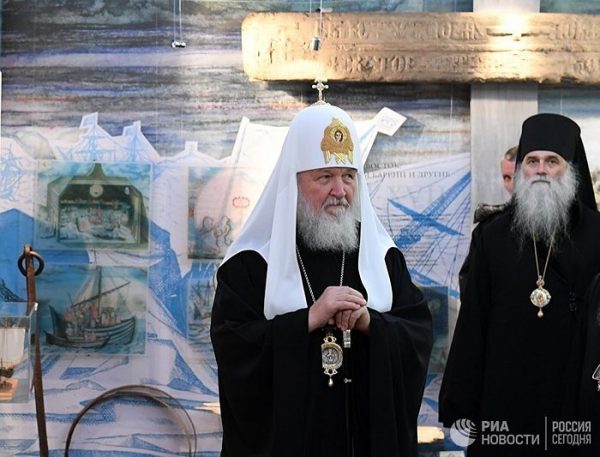 The Russian Orthodox Church is planning to take part in the celebrations in October on the occasion of the 70th anniversary of the establishment of relations between Russia and the Democratic People’s Republic of Korea, said His Holiness Patriarch Kirill of Moscow during a meeting at Christ the Savior Cathedral with a delegation from the Orthodox Committee of North Korea, reports RIA-Novosti.

“I am pleased to note that in the northern part of Korea, the Democratic People’s Republic of Korea, a society of Orthodox believers of North Korea has been created and is actively working. This year we will mark the 70th anniversary of the establishment of diplomatic relations between our countries, and I intend to send a delegation to your country to participate in the celebration,” the patriarch said, addressing the chairman of the Orthodox Committee of North Korea Vitaly Kim Chi Son.

Patriarch Kirill also noted that he has personally visited both North and South Korea and was “very much imbued with respect for Korean culture and the monuments of Korean history.” He also expressed his gratitude that a Church of the Holy Trinity was allowed to be built in Pyongyang, which he had visited in 2002.

“It is wonderful that this church is dedicated to the Holy Trinity. The Trinity is an expression of the idea of unity, and the unity of the Korean people, the unification of the country is the dream of your people. Let us pray to God the Holy Trinity that the unity of your people would be restored by Divine power, in response to human efforts and wise human actions,” the patriarch said.

His Holiness has also ordained two priests to serve in North Korea in the past few days. Four students from North Korea have attended the Khabarovsk Theological Seminary in the past two years.

“I believe that with the advent of the clergy in North Korea, the needs of Orthodox believers will be met,” the Russian Primate concluded.