Source: Interfax-religion
Natalya Mihailova | 23 May 2017
Moscow, May 23, Interfax - Patriarch Kirill of Moscow and All Russia has sent an early icon of Saint Nicholas to Pope Francis to express his gratitude for the pope's assistance in organizing the historic visit of the relics of Saint Nicholas to Russia. 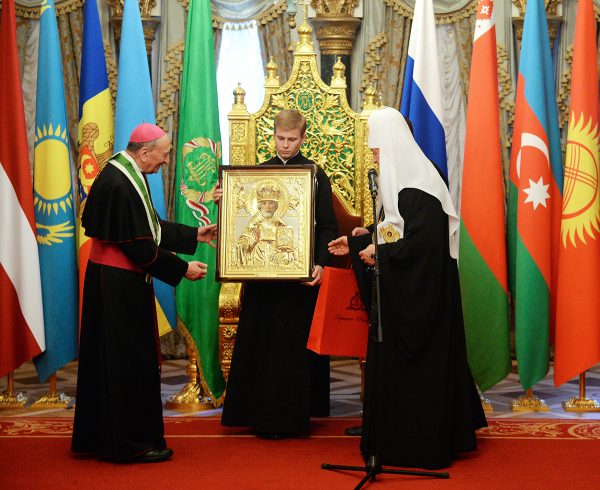 At the patriarch’s request, the icon will be handed over to Archbishop Francesco Paolo Cacucci of Bari, who met with Patriarch Kirill in Moscow on Monday after a religious service at the Saint Nicholas relics, which were brought to Moscow from the Pontifical Basilica in Bari the day before.

“In our difficult time, when we observe an escalation of conflicts and confrontation in international relations, cultural and spiritual cooperation is one of the most efficient means with the help of which the Churches can help overcome enmity between peoples,” Patriarch Kirill was quoted as saying by his press service to the Catholic delegation.

Russia and Italy have an “enormous cultural heritage”, which “was formed in the first place by the Christian faith of our peoples, and we should not lose this foundation of our cultural dialogue under any circumstances today,” he said.

The archbishop of Bari, for his part, said that the Catholic Church was constantly receiving requests to share the relics of Saint Nicholas.

The relics have been brought to Moscow specifically for the first time in 930 years, and this demonstrates the “privileged status” of relations between Catholics and the Russian Orthodox Church, and personally Patriarch Kirill, he said.

Patriarch Kirill also presented awards and memorable gifts to representatives of Italy’s clergy and authorities who took part in organizing the visit of the Saint Nicholas relics to Russia.

The relics of Saint Nicholas were brought to Russia as part of an agreement reached between Pope Francis and Patriarch Kirill during their historic meeting in Havana in February 2016.

As many as 18,600 people came to Moscow’s Cathedral of Christ the Savior to revere the relics of Saint Nicholas on Monday, the director of Moscow’s department for ethnic policy and interregional ties, Vitaly Suchkov, said.