Patriarch Kirill: St. Sergius is the Embodiment of Holy Russia

Holy Russia is what we call a meta-reality, that which lies beyond the boundaries of human reality.
Patriarch Kirill of Moscow and All Russia | 22 July 2014
The annual celebration on July 18 of the finding of the sacred relics of St. Sergius, Abbot of Radonezh (1422), this year became the culmination of the feast dedicated to the 700th anniversary of this great Russian ascetic struggler. Following the Liturgy at the cathedral square of the Trinity-Sergius Lavra, His Holiness, Patriarch Kirill of Moscow and All Russia addressed the numerous pilgrims with the following sermon: 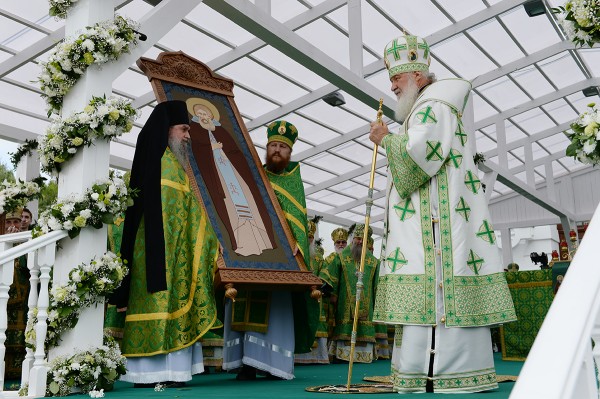 I would like to greet you all cordially on this great feast for our entire historical Fatherland and all of Rus’: the feast day of our Holy and God-Bearing Father, Sergius, Abbot of Radonezh.

Sergius, the Venerable God-Pleaser, is truly a luminary through his entire life and across all of history. As the flame on a candle concentrates all of its energy, so too did the personality of St. Sergius concentrate all the light and spiritual strength of Holy Russia.

When we say “Holy Russia,” what do we have in mind? Some people think that this is just a mythologema, an idea that was typical of our people in the Middle Ages. Others try to find the embodiment of Holy Russia in one historical period or another and, pointing at one or another period, say: this was Holy Russia. But neither the one nor the other is correct. Holy Russia is not a myth and Holy Russia is not an historical reality. Holy Russia is what we call a meta-reality, that which is beyond the boundaries of human reality. But if we use the word “reality,” then that which is beyond it has a bearing on our everyday life. And it becomes clear that Holy Russia is the undying spiritual and moral ideal of our people, and that the expression of this idea, its dominant, is holiness.

Surprisingly, if one asks a simple question: where else was holiness the basic, principal idea of people’s lives? Then we are talking neither about monasteries, nor about closed groups of people dedicated to the service of God, but about an enormous nation. Usually people have different ideals connected with earthly life: the ideals of wealth, power, and might. But the ideal of our nation was holiness; this was the national ideal, and therefore those who attained holiness, who realized this national ideal, became heroes: heroes of the spirit, ascetic strugglers, and luminaries. This applied to princes, boyars, rulers, military leaders, simple peasants, monks, and laypeople. And of all those who embodied the idea of Holy Russia, the Holy Venerable Sergius, Abbot of Radonezh, is in the first place.

And why in the first place? Who established the sequence of who comes first, and who comes second? Someone might ask: what can we read that comes from the pen of St. Sergius? The answer is that one cannot read anything; he did not leave behind a single line. Well, perhaps he did something very important that one can see, fell, and touch? No, he only built a monastery: a modest, wooden one in the impenetrable thickets. Now one can go by helicopter from Moscow to Sergiev Posad: how many woods and how few roads! But in those times it was a continuous thicket and impenetrable forest, and it was here that he founded his small monastery. He could not express all the might of the people and the entire Church…

But St. Sergius, who revealed the sanctity of his life in simplicity and humility, in wisdom and courage, become just such a personification of Holy Russia. And St. Sergius is mighty not in his writing, but in his disciples. Already during his life, and then after his repose, many monasteries were founded that began to repeat the spiritual experience of the Trinity-Sergius Lavra. And the Lavra itself began to expand, strengthen, and establish itself, becoming not only a spiritual center, but also a place of resistance to external enemies. And we know that when the Time of Troubles began in the seventeenth century and the fate of the nation hung in the balance, that the fortress walls of the Lavra did not fall before the enemy that was many times superior in number. Why was this? Because the strength of spirit of the resisting monks and musketeers was so great that it was impossible to crush them.

And it is here that we find a connection between man’s spiritual struggles, between holiness and the reality of our lives and our historical existence. This connection is obvious, because holiness cannot be limited to just one person. Holiness is the manifestation of God’s grace, and God’s grace is stronger than any radiation; it affects people minds and hearts; it unites thousands and millions of people. None of this can be touched or seen, just as one cannot read any written works by the Holy Venerable Sergius, because they simply do not exist. But God’s grace, through holy men, produces the great miracle of the transfiguration of the human person.

And we know that it was through his holiness, and not through any external gifts or any special will or force – it was through holiness that St. Sergius united the disparate Russian principalities. In his heart, illuminated by Divine grace, he saw in Dmitry Donskoy him who would be able to defeat the enemy. And uniting by his quiet voice, but with a warm and strong prayer, the disparate Russian land, he thus foresaw the victory on the Kulikovo field with which began the liberation of our Fatherland.

That is how the spiritual influences the worldly and external. But what happens when the spiritual is expelled from life? Then the world becomes weak, poor, and sometimes grotesque. And the more people strain themselves to multiply their power, but without having a connection with Divine grace and with the spirit, the more futile their efforts seem to become.

This history of our Fatherland in the twentieth century is a clear example of how the most powerful of human efforts made without God will break down like the Tower of Babel. Therefore perhaps the most important lesson that St. Sergius teaches us – who teaches us that Holy Russia is an unfading and undying ideal – is that we should keep this ideal, that we should strive for it, and on the way to this ideal to do everything possible so that our lives would become purer, brighter, and more just, so that our nation would find unity, spiritual strength, and the ability to solve all the problems that arise on its historical path. All of this is possible with God. And St. Sergius, to whom we have come in such numbers to his monastery today, teaches us this. Let us not forget his great and salutary lesson. Amen.