Source: TASS: Russian News Agency
"You can live wherever you want, but you cannot break spiritual and cultural ties with your people", Patriarch Kirill said
Natalya Mihailova | 04 December 2016
PARIS, December 4. /TASS/. Head of the Russian Orthodox Church, Patriarch Kirill of Moscow and All Russia, who is paying a visit to France has called on fellow countrymen abroad to preserve spiritual ties with their home country, the Russian language and culture. 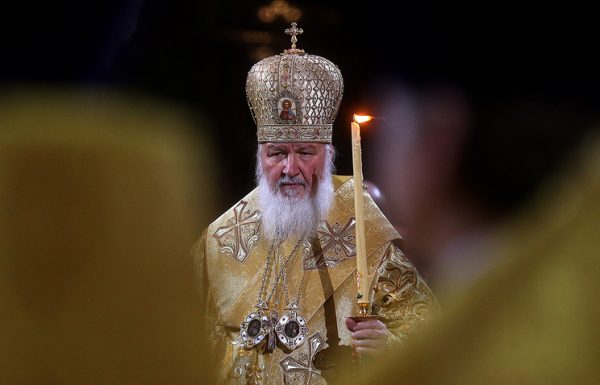 “May all Russian Orthodox Christians who, while being abroad, consider themselves members of the Church and go to the church, have this example of old emigration in front of them and by no means allow their children to lose their language and culture,” the patriarch said after an all-night vigil in the Russian Orthodox Church of the Three Hierarchs in Paris.

“It’s your duty. You can live wherever you want, but you cannot break spiritual and cultural ties with your people. It is very dangerous for an individual’s integrity, for one’s cultural identity. So may God help you all to preserve your faith, Russian culture, the Russian language, visit churches and do good works Our Lord urged us to do.”

“Keep the Orthodox faith in your hearts the way it was kept by the first generations of Russian emigrants,” the patriarch went on to say.

“They lived in poverty, had many woes but preserved their faith selflessly. Not just the faith, but also their culture and language. I am sometimes amazed by the fact that today’s young people coming abroad who have not learned the local language properly yet begin to speak Russian with an accept using foreign intonation. The old emigration spoke Russian wonderfully. They were indeed patriots who preserved love for their home country, the Church, the people and preserved wonderful Russian culture.”.

Most viewed articles
“Do Not Weep”155
Christ the Life Giver139
Best Films of the Pokrov Film Festival Have Been Determined132
The Religion of Self119
Patriarch Kirill Answers Questions from Participants of the Ninth Faith and Word Festival92
(VIDEO)Celebrating 5 years of Byzanfest International Orthodox Film Festival90
“He preached the message of the Resurrection for 12 years”: First Bishop of Deva Gurie Georgiu laid to rest at Cathedral of St Nicholas44
Patriarch Kirill: “An Effective Way to Overcome Social and Economical Dead End Is to Be Guided by the Word of God”30
Why Pray if Nothing Changes?1
The Pain that Leads to Joy1
Most popular authors
Pravmir.com team344
Archpriest Peter Olsen155
Fr. Theodore Stylianopoulos139
Fr. Gabriel Bilas119
Aurelian Iftimiu44
Metropolitan Hilarion (Alfeyev)1
Fr. Andreas Agathokleous1