Source: B92
BELGRADE -- Patriarch Irinej of the Serbian Orthodox Church (SPC) on Wednesday sent his Easter message to all Christians.
Natalya Mihailova | 17 April 2014 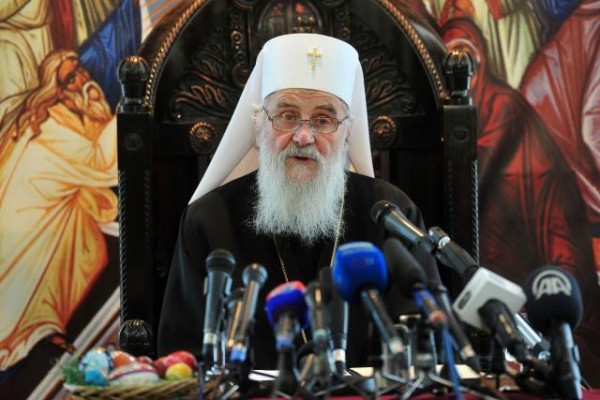 The patriarch stated that he was particularly praying for “the brothers and sisters in the Middle East and Ukraine,” with the wish that his prayer and the Easter holiday would “enlighten the minds of hate-mongers against the Holy Orthodoxy.”

Irinej sent special greetings to “the suffering brothers and sisters in Kosovo and Metohija, who, although shackled down by non-freedom, deprived of their rights and discriminated against, celebrate Easter as the victory of good over evil, life over death and the victory of the resurrection of Christ over the demonic forces of the darkness.”

“With the same love in the resurrected Christ and warm prayers, we also send greetings to all our brothers and sisters in Dalmatia, Lika, Kordun, Banija, Slavonia and Baranja,” the patriarch said.

He sent the traditional Serbian Orthodox Christian greeting “Christ is risen” to the believers of the Serbian Orthodox Church in Republika Srpska, Bosnia and Herzegovina, Montenegro, Slovenia, as well as those in the Former Yugoslav Republic of Macedonia who, guided by the unjustly imprisoned Archbishop Jovan, are suffering for the unity of the church and purity of the Orthodox faith.

This year, Easter will be celebrated by the Orthodox Christian world on the same day as in Western Christian nations, on Sunday, April 20.