Source: DECR
Natalya Mihailova | 09 March 2016
On March 8, 2016, His Holiness Patriarch Neophyte visited the Moscow representation of the Bulgarian Orthodox Church in the church of the Dormition of the Most Holy Mother of God-in-Gonchary. 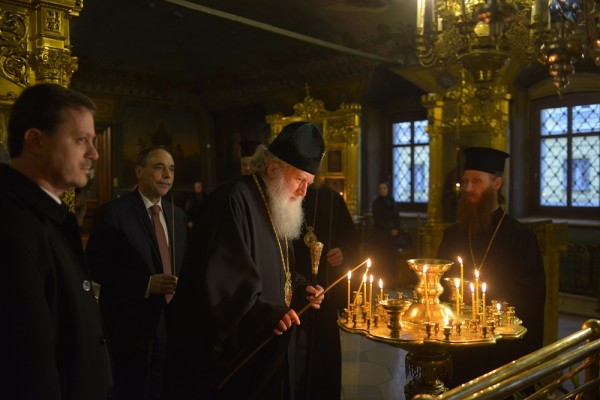 His Holiness was accompanied by members of his delegation including Simeon Saxe-Coburg-Gotha, head of the Bulgarian Royal House, and Mr. Boiko Kocev, Bulgaria’s ambassador to Russia, as well as Bishop Tikhon of Podolsk, Archimandrite Philip (Vasiltsev), rector of the Sofia representation of the Russian Orthodox Church, and Hegumen Feofan (Lukyanov), head of the protocol service of the Department for External Church Relations (DECR).

Patriarch Neophyte was welcomed by the rector of the representation, Archimandrite Feoktist (Dimitrov).

His Holiness and his party venerated the main shrine of the church, the miracle-working Icon of the Three-Handed Mother of God.