Source: DECR
Natalya Mihailova | 28 October 2015
On October 27, 2015, His Holiness Neophytos, Patriarch of Bulgaria, received a delegation of the Russian Orthodox Church, led by Archbishop Innocent of Vilnius and Lithuania. 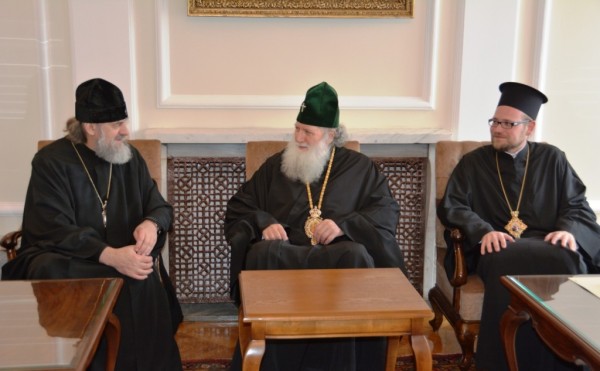 Taking part in the meeting was also a delegation of the Orthodox Church of the Czech Lands and Slovakia, led by Archbishop George of Michalovce-Kosice.

Among the participants in the meeting were Archimandrite Philip (Vasiltsev), Sofia representative of the Patriarch of Moscow and All Russia, Archimandrite Seraphim (Shemaytovsky), representative of the Orthodox Church of the Czech Lands and Slovakia to the Patriarch of Moscow and All Russia, Archpriest Vladimir Selyavko, secretary for external relations of the diocese of Vilnius and Lithuania, and Hieromonk Zotik (Gayevsky), secretary of the Sofia Representation of the Russian Orthodox Church.

Patriarch Neophytos warmly welcomed the guests who came to Bulgaria for the celebrations in the Metropolia of Vidin and discussed with them some pressing problems of general church nature.

In conclusion of the meeting, patriarch Neophytos presented all the participants with tokens of the meeting and gave them his primatial blessing, the website of the Sofia Representation of the Russian Orthodox Church reports.