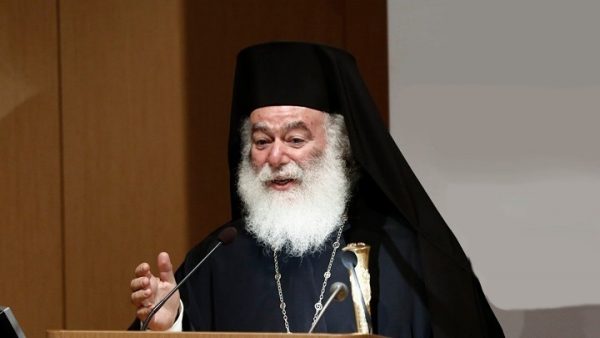 Patriarch Theodore of Alexandria and All Africa

Patriarch Theodore of Alexandria and All Africa, who is currently visiting Cyprus on September 11-18, sent a message that the biggest problems have their solution, “we just have to look at them with courage and love, and to learn to help each other”, reports the Orthodox Times.

In an interview with the Cyprus News Agency, he said that Greece, Cyprus and Egypt had close links with each other at that time, and the presidents’ friendship helps his work.

When he was asked how they dealt with the pandemic, the Patriarch of Alexandria replied, “we have (in Egypt) too many cases because we must not forget that the population has exceeded 110 million.”

In Egypt they renovate our churches, they do not convert them into mosques

When he was asked that today the Middle East and especially Christians have to encounter great challenges, threats, persecution, violence, immigration, and that we see churches being converted into mosques with the biggest challenge being that of the Hagia Sophia, the Patriarch of Alexandria replied that he immediately sent a message of support to the Ecumenical Patriarch.

“I made a comparison, saying how blessed I am because the status of our churches is not changed and they even give the licence almost as soon as I submit a request for renovation. Not only do I get the licence immediately, but also the State has provided assistance in the renovation many times, whatever I need, as has been the case of St. Catherine in Suez and of the Church of St. George which is shown on Egyptian television just like Cyprus’ state channel. When the program starts, you can see the official mosque and right next to it the Church of St. George in old Cairo. I was deeply hurt by the affront to our great monastery, the Church of our dreams, the Hagia Sophia, so I appealed, I also sent the messages I had to send, and I made the comparison, saying how blessed we are in Egypt because we can renovate our churches and how deeply the Greek community and Christianity is hurt, when we see the Symbol of Christianity being converted into a mosque by revoking its status,” he noted.